A Great Day With A Steam Locomotive

posted on Apr, 13 2014 @ 12:52 AM
link
When I heard about the Southern Railway #630 taking part in public excursions hosted by the Tennessee Valley Railway Museum and after much debating over the past week. After checking the weather forecasts, the decision was made to take a little trip to Western Virginia. A couple of friends of mine and myself decided to head down to Grundy, Virginia to chase after and video and take photos of the excursions happening during the first part of the weekend. Realizing that it was a three hour drive down to Grundy along some of the "finest," and I'm using that term loosely, state highways of Kentucky. We made it to our destination just as the train was loading. So the decision was made to try and get ahead of it and we did just that.

The first two photos are at North Grundy, Virginia looking down over Norfolk Southern's Weller Yard as the excursion train heads west before turning almost due east about a mile from this location. The first photo shows a cloud of white steam billowing out skyward as the boiler pressure safety valve pops open to release pressure on the boiler.
 

Second photo shows it gliding through the yard just as it is about to pass under US 460.
 

Third photo is at Stopover, Kentucky further east on along the Buchanan Branch. This as the engineer has her running in a full trot past the camera and the line of photographers. She was running hard and running fast as the black smoke is just rolling out from the stack as they try to maintain traction to keep from stalling out on the slight grade.
 

Fourth photo is at Harman Junction just west of Grundy between Grundy and Weller Yard. Struggling to gain every bit of traction after coming out of the yard. She is seen putting on a show as a plume of black smoke once again rolls up into the blue Virginia sky. This as the train is on its way to turn around for the final eastbound trip of the day on Saturday.
 

The last photo is at Hurley, Virginia about eight miles from its last stop and the last return trip of the day. This was one photo that we could not pass up. So, on the last trip to Devon, we just had to take the shot here as it was in very good light for the late evening in the hollows. Here we see the train passing the Control Point and signals at Levisa Fork. In this photo, she is barely even breaking a sweat as the final eight mile leg of the trip is on nearly flat terrain through the creek valley.
 

posted on Apr, 13 2014 @ 12:57 AM
link
I just saw the title of the thread and knew it was you Gimme! LOL Awesome photos! Glad you had such a good time. My great nephew LOVES trains! Once he said he was going to be a train conductor and a mailman. I said, Good luck with that!" LOL

You know me too well my dear! It was a wonderful opportunity that I was sure as hell not going to pass up. I had an awesome time and experience exploring the area in Western Virginia. I would love to go back down to that area later on this spring or in the fall when the leaves are changing colors. I would not be surprised one bit if they planned to do something like this during a weekend in the fall. There were a lot of photo opportunities to be had and I think that we made the best of it.

posted on Apr, 13 2014 @ 01:21 AM
link
I have a niece and nephew who still lives in Virginia. I've never been. Have a brother in South Carolina. Funny for me to hear family members with southern accents. You know, y'all? Hopefully you'll get to take another trip next year.

Night Star
I have a niece and nephew who still lives in Virginia. I've never been. Have a brother in South Carolina. Funny for me to hear family members with southern accents. You know, y'all? Hopefully you'll get to take another trip next year.

Accents, as well as the police, were out in full force down there yesterday. It seemed like everybody, their brother, and their mother were down there. I know that I saw license plates from Illinois, Wisconsin, and Missouri down there. Was quite a shock to the system to see vehicles with New York and Connecticut license plates down in the Middle of Nowheresville, Virginia!! Come to think of it, there may or may not have been an Ontario plate thrown in there somewhere.
edit on 13-4-2014 by gimmefootball400 because: (no reason given)

Trains aren't my thing I'm more of a gear head, but a passion I can understand and it shines through in those pictures

Now there is an overhyped steam locomotive like the Union Pacific "Big Boys!!" I'll take the cinders from a coal fired locomotive over an oil fired one any day of the week. We all know that the Alleghenies were more powerful than those Big Boys could have ever dreamed of being.

I have some pics here of my local train attractions. (Not taken by myself)

This first one was taken where I live now.

Originally it was a coal line taking coal from Wales to England during the 1800's. It became a passenger line about ten years later and stopped taking coal altogether when the mines closed in the 1980's. There is a section of the track that caters to tourists and train enthusiasts, I haven't been on it though. Maybe I will get around to it this summer.

The Pontypool and Blaenavon Railway (PBR) formed in 1980 with a train service starting in 1983 running from Furnace Sidings to Whistle Inn Halt. At over 1300 ft above sea level the Whistle Inn Halt is the highest station in England and Wales. The line has extremely steep gradients up to 1 in 29 which requires the industrial locomotives used to work very hard. 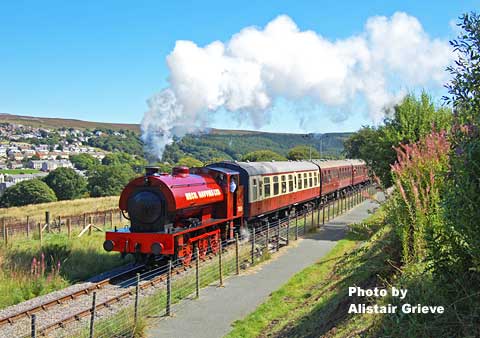 This next pic was taken of a train going over the river Usk in Newport. (Where I used to live).

In about fifty percent of my dreams I am in this area lol, either dreaming about the train falling into the water or floods with trains driving through them. I know, I'm odd lol.

After a triumphal main-line run to Newport, Gwent, with a train of Severn Valley Railway restored wagons as part of the GWR 150th anniversary celebrations in 1985, No. 2857 entered regular passenger service on the SVR. She went on to clock up a further 41,000 miles before expiry of her 10-year boiler certificate in March 1995. 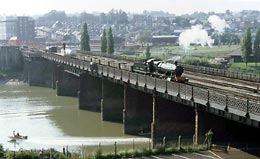 This is the Crumlin viaduct that took coal from Ebbw Vale to Newport. It was dismantled well before my time but everyone around here still talks about it. I found some A3 prints in black and white in the attic last year but my old boss has them now. 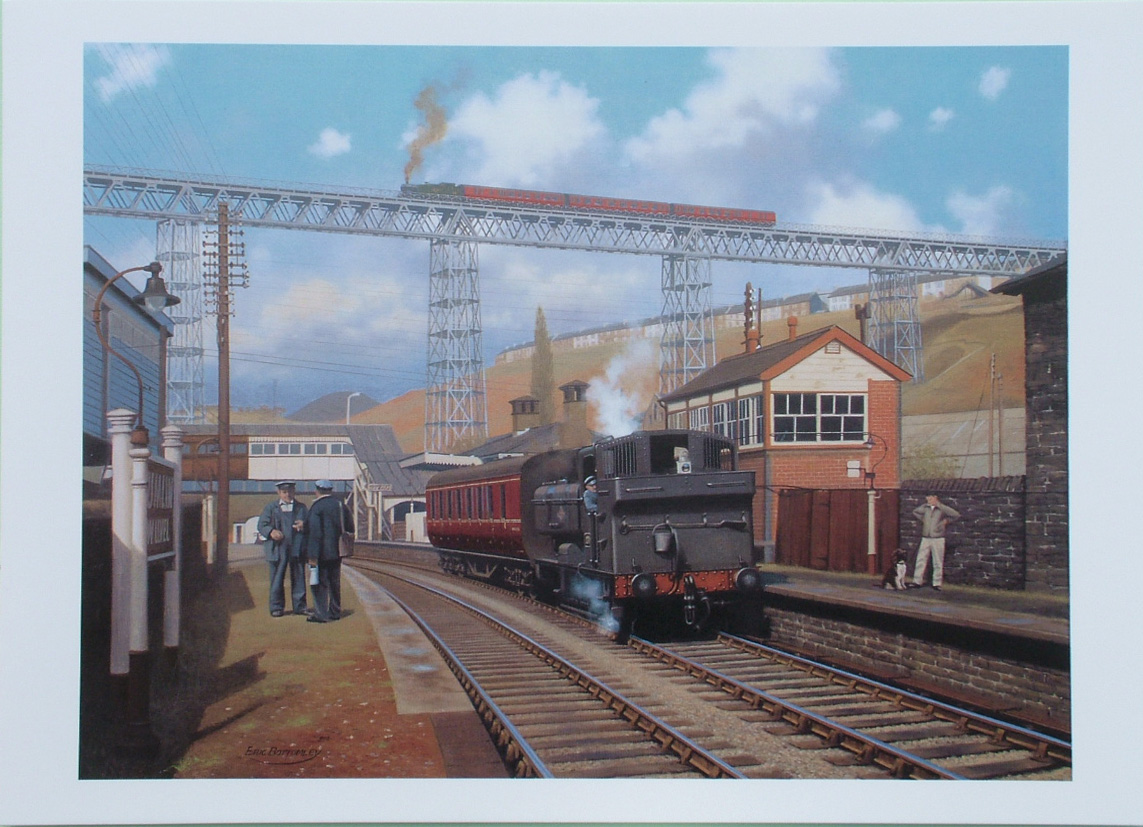