posted on Apr, 12 2014 @ 10:47 PM
link
A bad year for Chile I must say, sad to see this happening to such a beautiful city and great people. The government says the fire is out of control now. 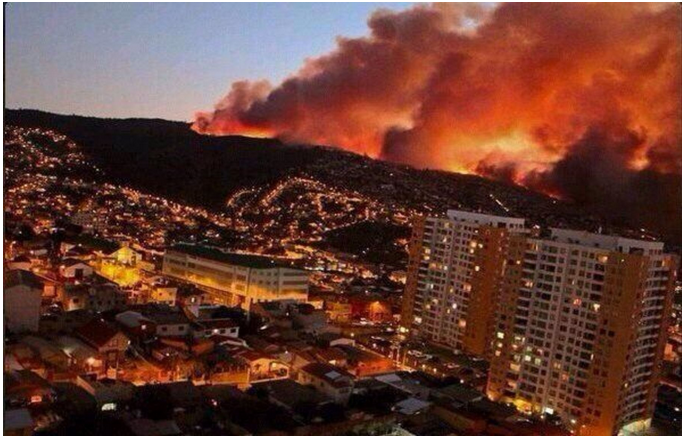 21:43. Santiago, April. 12. The Chilean government decreed a state of emergency in Valparaiso as a result of a forest fire today and registered at the time has become uncontrollable, confirmed the Interior Minister Rodrigo Peñailillo.

He explained that the measure was enacted by President Michelle Bachelet and considers the involvement of the military in the emergency zone, to prevent further spread of the fire and evacuate the population.

"The fire is in full swing. We do not know exactly the number of affected homes.'s Latest report showed us that at least 100 of them were totally burned," said El Mercurio.

Peñailillo went to Valparaiso tonight to assess the situation on site and work with fire control and security.

It is still unknown how the emergency on the hills of Valparaiso originated, which last year reported a similar incident.

Minute by Minute: Valparaiso Mayor says 3000 people have been evacuadasLa Saturday afternoon a wildfire broke out in the hills of Mariposa and El Vergel city harbor. The fire could not be controlled and the government declared a state of emergency in the area.

On the video thay talk about explosions produced by the fire (maybe gas), black out areas,.....a mess.

Over the hours, the fire became uncontrollable and reached two ridges of the more than 40 in Valparaíso, where thousands of people live in houses made of wood and tin.

ONEMI (National Office of Emergency of the Interior Ministry), says the number evac people went up to 5000. This is moving too fast and authorities can't hold it. So it's wise to move the people without waste of time.

In relation to those affected , the Municipality of Valparaíso ordered three shelters , distributed in Greece, Pablo Neruda and complex Florida schools. On the other hand , are reported when more than 100 homes destroyed and about 5000 people evacuated in the affected sectors of the hills .

posted on Apr, 12 2014 @ 11:27 PM
link
So far only minor injuries and no deaths. Those poor people, my heart really goes out to them! I would imagine a lot more will be losing homes before this is all over.


Indeed, here a photo from CNN Chile, speaks by itself :

A wildfire in Chile consumed more than 500 homes Saturday and continues to rage in highly populated areas, officials said.

I'm afraid the reports of injuries and deaths may go a lot higher based on these reports. This is awful. I pray these people had (and have) time to get away.


500 homes already, this is too fast. At this speed, by tomorrow Valparaiso won't exist anymore. I think they know it and that's why they focus in saving the people now.

UNCONTROLLED FIRE
Meanwhile, Valparaiso Fire and Conaf still struggling to control the flames on several hills of the city. The fire has been fueled throughout the day by high winds present in the area.
The fire started as a forest fire near 16:00 hours on the road The Gunpowder, but spread out of control after a populated hills of La Cruz, El Vergel, Nun and Butterflies areas. But the hills were at risk Reeds and San Roque.

Note that the communes of Valparaiso and Vina del Mar meet Red Alert in effect for wildfire, so constant monitoring is maintained and will have the resources needed to overcome the emergency. 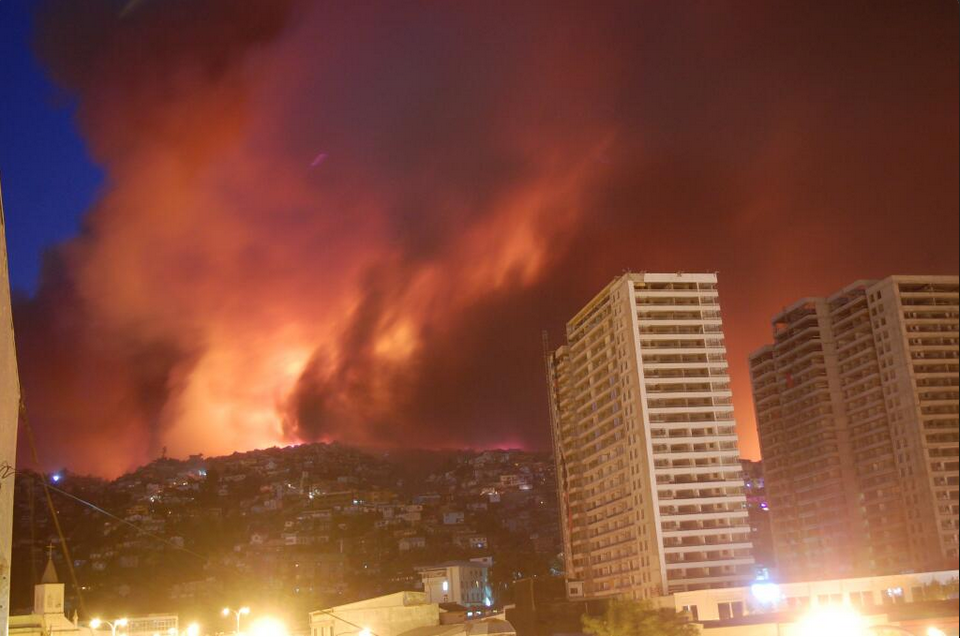 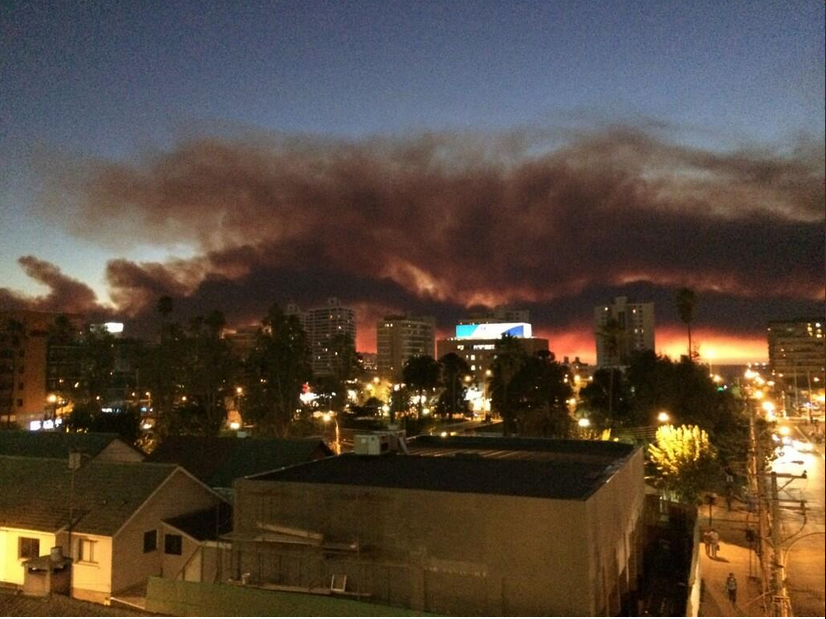 
My heart goes out to them. Stay safe.


Oh no! I was so hoping that people evacuated soon enough. Or...was it fire fighters that died? This is so sad. Imagine one day you have a home and the next it's all gone and everything you own with it? I am fearful of more deaths. Hopefully those who were supposed to evacuate, listened. Sometimes people are stubborn and wait until it's too late. I fear firefighters may lose their lives. That is one huge out of control fire!
edit on 13-4-2014 by Night Star because: (no reason given)


Just read the number is 4 now. No details about the victims. Fire still unstoppable.


Nice photos ,any more nice photos close to the fire ?


Not sure if "nice" is the right word to describe the photos.


VALPARAISO, Chile (AP) — A raging fire leaped from hilltop to hilltop in this colorful port city, killing at least 16 people and destroying more than 500 homes. More than 10,000 people were evacuated, including more than 200 female inmates at a prison.
Source

Seems to be engulfing the city. Sending regards.


It was already the worst fire to hit the picturesque seaside city of 250,000 people since 1953, when 50 people were killed and every structure was destroyed on several of the city's hills.


Thanks for the update. the fire already reached historical proportions. Not too many members care about this tragic event and that is sad too.

posted on Apr, 13 2014 @ 02:18 PM
link
Oh no!! My heart is breaking for the people of Chile Can not imagine the fear the people of this city would have felt seeing that fire looming over the hill of their city. 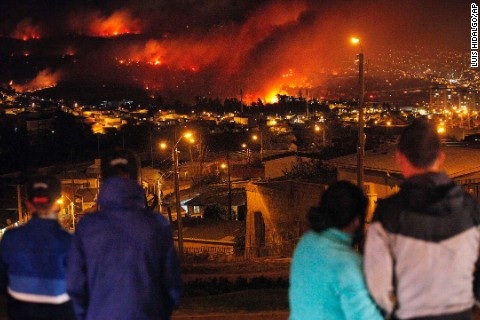 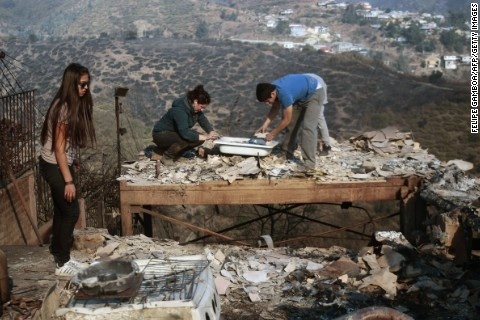 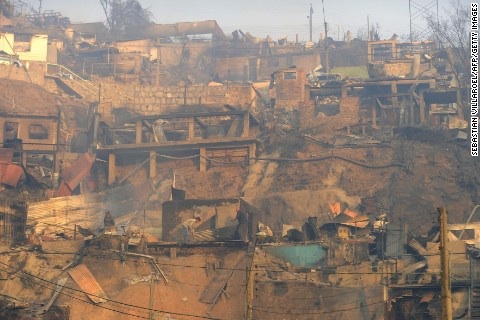 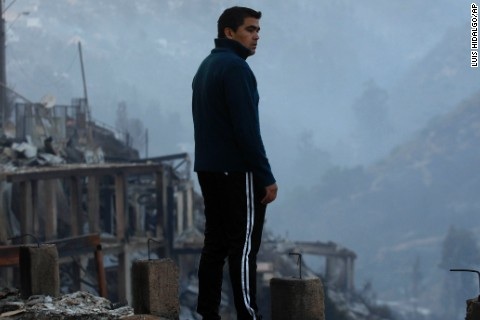 The city of Valparaiso is about 1000 miles from the earthquake epicenter, hopefully the people of this city were not impacted by both the earthquake and the fire. 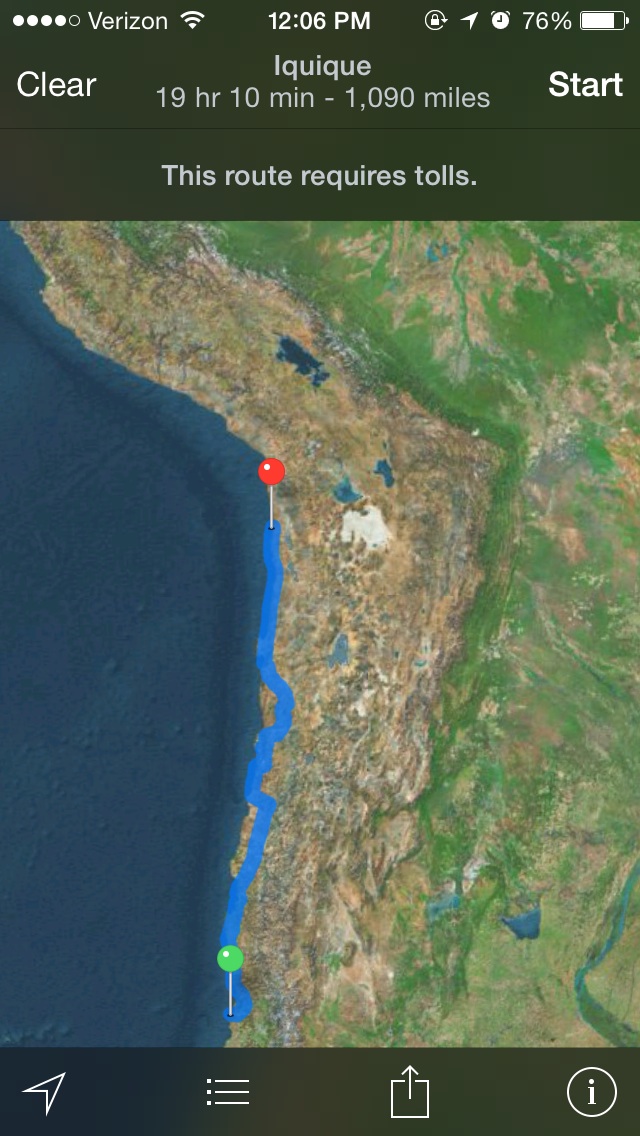 CNN is reporting 16 people have died.


Chile poured firefighters and police into the battle against a wildfire that swept through hundreds of homes in the Pacific coastal city of Valparaiso, leaving at least 16 dead, according to Chile's National Emergency Office's website. The site is attributing that number to police.

When in rains it pours...wind is not helping fight this fire


The wind hampered firefighters' ability to create firebreaks, and the blaze had spread to nearly 2,000 acres, according to Chile's National Emergency Office.

Inmates at a prison in the area are also being evacuated


In addition, plans were being drawn up to evacuate inmates at Valparaiso prison as a preventive measure, Mayor Jorge Castro said. The city is under a red alert, said emergency office spokesman Ricardo Toro.

Situations like this really put things in perspective...and I thought I was having a bad day, turns out it really is not that bad.
This is so gut wrenching, seding positive energy and love to the people of Chile.