Wandjina a timeline of the UFO mythos

posted on Apr, 12 2014 @ 09:59 PM
link
Was chatting to an old friend this evening and the subject of TV series aired in Australia and Grt Britain in 1967 came up. It was kids Sci Fi show and featured the famous/infamous depending on your point of view, Wandjina caves and First Australian's cave paintings that have been the subject of much speculation.

Sadly, as far as i known, non of the episodes still exist and even a detailed search of the web has not turned that much on the series and so far no episodes at all. here's a brief synopsis from IMBD.com

Children's fantasy drama / SF series about a trio of children who become caught up in an adventure linked to local sacred Aboriginal cave paintings about the "Wandjina" - the people from the sky.

The children see some strange things: One striking scene shows a mysterious hooded figure hunting kangaroos with a rod that strikes them down silently at a distance. The local Aborigines know about these people - they are the Wandjina, the people from the sky who visited long ago, in the Dreamtime. What becomes apparent is that not only are they real, they have not all left.

A suspenseful series with a satisfying conclusion.

The same behind the scenes people were responsible for 1965's serial "The Stranger".

Now, from that it's plain this was talking about a connection to aliens before Chariots of the Gods was written in 1968 and from memory, I can remember no specific reference to Wandjina in "The Eternal Man" Louis Pauwels and Jacques Bergier, the book published in France that is generally considered to have kicked off the whole "Aliens visited us in the past" trend.

It would therefore seem that, the Alien hypothesis for the cave paintings at Wandjina, though couched as fiction, therefore had appeared before Von Daniken penned his first book, although there is a slim possibility that Von Daniken saw the show himself, I actually doubt it. Interestingly, it would seem that the same production company was also responsible for another lost series about Alien visitation namely "The Stranger". Whilst I have no personal recollection of the Wandjina series "The Stranger" I most certainly do and it was one of my favourite series as a kid.

So, a couple of points I'd like to raise and see if anyone can fill in the gaps. Firstly, anyone who remembers the series and it's depiction of Aliens and furthermore and more importantly, do any of the Aussie members of the forum have any knowledge of how far back the idea it might be aliens that the Wandjina paintings depict goes? Was it just serendipity that the show's authors picked on that site or were there already rumours, fables, tales, that were in general circulation that, there might be an alien connection?

it might seem strange to seek out such information as it's only a kids fictional sci fi series however, I am deeply intrigued by the sociological time line of the UFO phenomenon and this show could bump the time line back a couple of years at least and show that Daniken's seminal work, wasn't the "first" to make such postulations and that, in this case, there was already possible folklore that encompassed the concept of "aliens" as many think of them and they are portrayed by the media, today.

I am also fascinated that, The Stranger, an alien in human form who mysteriously appears on a family's doorstep, was produced in 1964 and and a second series in 1965 , making it contemporary to the Solway Firth photograph and the "Woomera Launch" incident. It is probably mere coincidence however, one can't help wonder if the author of "The Stranger" G K Saunders, was inspired by some tale he was told or had heard through the grapevine in Australia.

Whilst we're on the subject of the "early" Australian media there is one "legend" I'd love to ascertain as to it's truth or fiction. About 20 years ago in a Fortean Times article, a passing reference to a 1930s cinematic release was made. Australia, being somewhat culturally isolated back then, had quite a thriving small film industry to cater for the home market. The film referred to in the Fortean Times article was supposedly set on some cattle station and involved "aliens" visiting earth and leaving mysteriously mutilated carcasses of cattle and other animals in their wake. I would dearly love to know whether this film is merely an urban legend , a story concocted in the 80s to tease those interested in the "cattle mutilations phenomenon" or, whether it really existed and if so. What was the story's inspiration or, did that film made way out in Australia decades before, provide the actual basis of the "cattle mutilation legend", possibly brought to Britain and the USA by some serviceman/men, who had spent time stationed in Australia during WW2 and who saw that film?

Anyway, I'd be truly grateful should anyone have any further information on any of these series or the film and know more about their background and in the case of the film. did it really ever exist?

He has been to the Kimberleys many times and has sat down and spoken to the Wandjina tribal elders.

He posted this, albeit brief, but very telling content about UFO and non-human encounters......


1. The Wandjina Aboriginal Elders in the Kimberley Region of Western Australia.........they have ongoing encounters and a massive history pertaining to this phenomena.

and then about 7 posts later on the same thread.....


Quality, not quantity, is the key to this subject.

I challenge you to dispute their claims.

Start with the Aboriginal Elders.....I've met, talked to and stayed with them many times to learn their stories, which they take EXTREMELY seriously. But it will require FIELD RESEARCH because your computer screen and google will pull up very little about them regarding this.

That means going to the Kimberleys in Western Australia, gaining their trust and then documenting their stories - no easy task if you rely on "online" information to draw your conclusions as is clearly the case with some individuals. 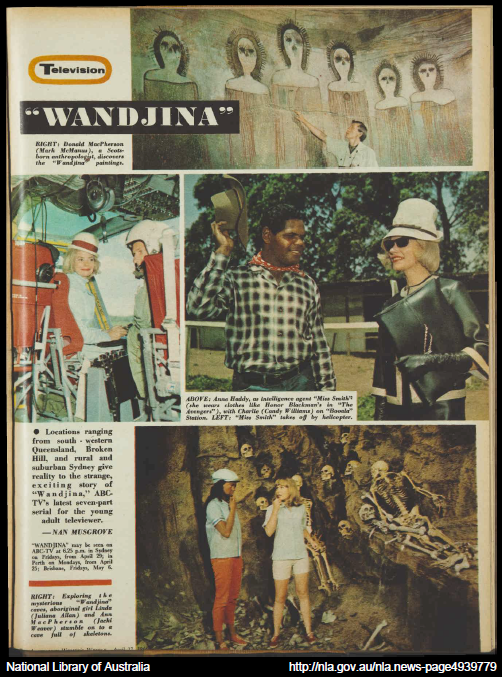 
I don't know this show. The only Australian show that ever aired here in the US was Skippy the Bush kangaroo. I did like that.

posted on Apr, 13 2014 @ 01:42 AM
link
Hello, this doesn't exactly relate to Wandjina, but I found this article about current Aboriginal UFO beliefs rather interesting:
www.anthropology.hawaii.edu...

On another note, some years back, I went to the Dreamtime Aboriginal Cultural centre near Rockhampton, Queensland. The lady who was the tour guide told the story of the Djun Djetti [sp?] people. She said that they were well known to the Aboriginal people who live in outback Queensland. They are described as being the size of a child, and with red eyes. Aboriginals driving in the outback would turn their rearview mirror up so they wouldn't see the Djun Djetti sitting in the back seat.
edit on 13-4-2014 by captainradon because: (no reason given)


From Wikipedia, the free encyclopedia

Wandjina! was an Australian children's science fantasy television series produced by ABC Television and first aired in 1966. The story was inspired by Dreamtime mythology of the spirit ancestors of the Kimberly region of north-West Australia and is about three teenagers who become caught up in an adventure linked to local sacred Aboriginal cave paintings of the Wandjina — the "people from the sky" who visited long ago, in the Dreamtime.[1]

Wandjina! was the first integrated film and videotape drama production ever undertaken by the ABC in Sydney.[1]

A team of scientists including Miss Smith, venture into the Australian outback to investigate strange incidents. Donald MacPherson, a Scots-born anthropologist, discovers aboriginal paintings found on cave walls depicting mythical alien beings — the 'Wandjina', an extraterrestrial race that visited the ancient aborigines. Disturbing events indicate that not only are the beings real, they have not all left. The daughter of the anthropologist, Ann MacPherson and Linda, an aboriginal girl, explore the Wandjina caves near "Booala" Station and stumble on to a cave full of skeletons.[2] The teenagers see some strange things: in one scene a mysterious hooded figure hunts kangaroos with a rod that strikes them down silently at a distance. The Wandjina resemble hooded monks with what looks like life-support back packs (similar to those astronauts used on the moon). Their power base is in a lighthouse style tower at the top of farm land.

In one of the episodes an elongated skull, "the Wandjina skull" is unearthed from sand causing gale force winds.

posted on Apr, 13 2014 @ 01:59 PM
link
The large black eyes on the "people" in the cave paintings, couldnt that be humans after taking hallucinagenics?
When a person takes them their pupils go huge and black like in the images
Just a thought...

do any of the Aussie members of the forum have any knowledge of how far back the idea it might be aliens that the Wandjina paintings depict goes?

Im from Western Australia and spent a great deal of time in the states north, tho the Wandjana's are not isolated to the Kimberly region.

Also I would like to point out the linguistic similarity between the word Wandjana and the Nyoogar word Wadjala--meaning white person. Some indegenous people I know have said that when the Europeans first arrived the original peoples thought the Wandjana had returned.