why all the earthquakes recently?

Every year from Marts to May/June there is a rise in activity worldwide, i don't know what causes it but it's returning every year spot on, i'm only missing a quake in Turkey from my observations then the circle is complete.

originally posted by: BELIEVERpriest
Maybe it all has to do with what Jesus said. "Earthquakes in diverse places".

From a video transcript:

"Earthquakes have been appointed by the decree of the watchers” "I hear the Spirit of the Lord speaking many more great earthquakes are going to come upon the face of this world such as the world﻿ has never seen before, not since the time of Peleg” (earthquakes divided the continents during the days of Peleg, Genesis 10:25)

Decreed by the Watchers

"So when the angel of the United States of America came and stood before me, …I tremble and quake every time I see an angel of a nation, he told me, “An awesome judgment is going to come upon America very soon.” An awesome judgment.

"My dear brothers and sisters, I tell you one more truth today. As the chief prince angel of the United States of America stood before me, he said, “Like the angels that went out to spy out Sodom and Gomorrah, a host of angels are walking the length and breadth of your country, spying out the land in a similar manner to how the two angels did (at Sodom).”

"I was in the nation of Indonesia... On the first day that I was in that nation, the chief prince angel over Indonesia entered into my room, and he said, “Whatever has happened in this nation has been decreed and ordered by the watchers in Heaven. They decreed and they said, let there be a change.” And overnight, the dictator of thirty-two years was overthrown. Overnight -- it did not happen over a long period of time. Overnight, he was overthrown -- decreed by the Watchers...." "You (America) are in that stage (or situation) right now, and your only appeal is to the Heavenly Father. The final pardon is in His hands." Sadhu Sundar Selvaraj

Source: PROPHETIC MESSAGE TO THE CHURCH


I follow Extinction Protocol which provides links to each news event as they happen and they number each volcano eruption through the year. Not sure they can fudge that up when they provide links. They also use Volcano Discovery.

So. No database then. That makes it sort of hard to verify their numbers.
Here is the list of erupting volcanoes in 2013 from the database I used. Can you check their links to find out which ones I'm missing? Maybe we can find the source of the discrepancy.


Hard to deny that there is a significant increase in quakes when these numbers rise that much without the USGS even tracking them outside the United States.

I'm not sure where you came up with those numbers but why did you stop at 2010? This is what I get:

The only real increase I see is in very small quakes in 2013? What happened there? Well, one obvious thing is that data up until 2012 there was data from just one network (PDE) included in the database. In 2013 there is data from 14 networks. Most notable additions are the Alaska, Northern California, Puerto Rico, and US networks. Between those there are an total of more than 7,000 tiny earthquakes. Since tiny earthquakes cannot be located except by local networks, it makes sense that there would be an increase in recorded quakes with increase in the number of networks.


they dont want panic. gotta hav sum disinfo out there, right?


besides, sum might prefer not to know, if its really bad?

I can already tell you what the discrepancy is without looking it up. My source accounts for multiple eruptions for one volcano. You are only counting the volcanoes that were active. If say Sinabung erupted in April and then again in November, that would count as two. Your way is just another good way to hide the real numbers.
edit on 19-4-2014 by Rezlooper because: (no reason given)

I can already tell you what the discrepancy is without looking it up. My source accounts for multiple eruptions for one volcano. You are only counting the volcanoes that were active.

The database includes all the eruptions each year.
For example in 2012 Tongariro had two eruptions; August and November.
Uluwan also had two; May and November.
Marapi; March and September.

Multiple annual eruptions are not that common but I ran an analysis ignoring them. It doesn't change things much.

Okay..........is this about judgement? Because I have a question about God's judgement.

First, I do believe in a creator, though of course he is not an old man in a white beard, when it is said God has made us in his image, of course it is referring to our consciousness/soul that is in his image, not our physical body.

Thanks for weighing in John. It's been a while since you gave us a visit. Welcome back.

BTW, I'm loving the new spectrogram pages on your site--I give them a look almost every day.

I'll go through their list and get back to you on it. Are you saying then that in 2013, there were no multiple eruptions from one volcano?

So you can look at them as having erupted twice each in 2013.

In a separate analysis, yes.
And as I said, it made little difference from the analysis which included them.
Including multiple eruptions in a single year: 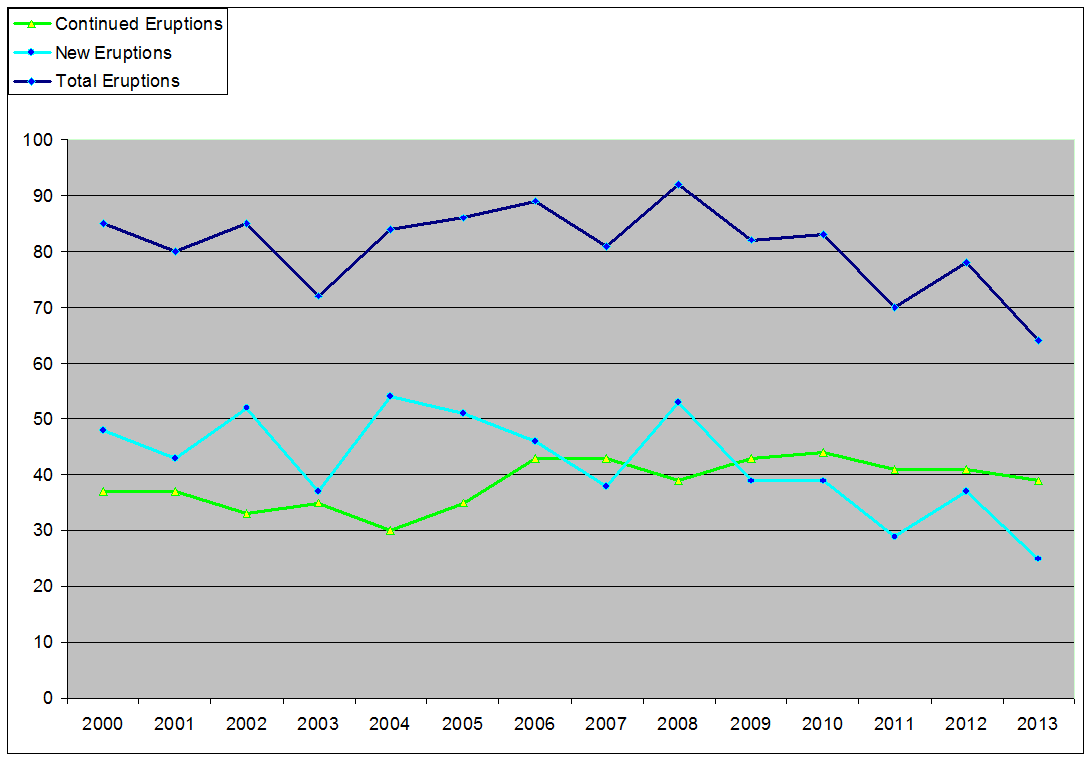 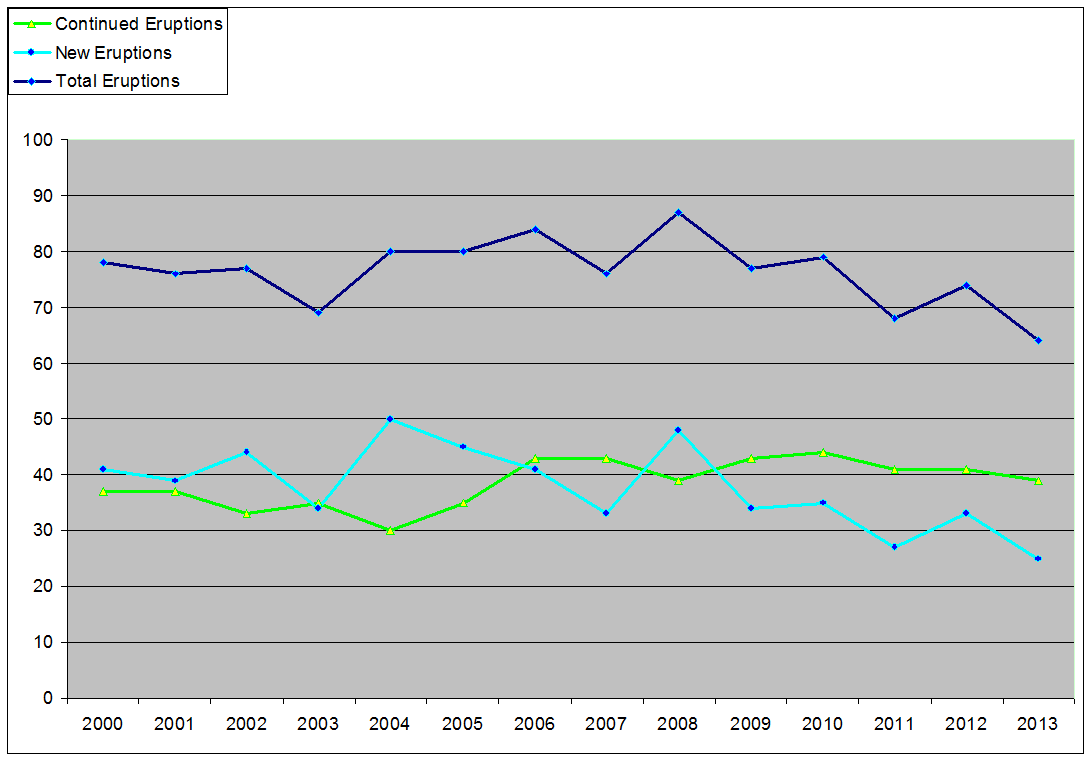