A fail from real life made by Russian televison stations by using the same actor in two separate newspieces, but the roles are different.

1) Andrei Petkov is seen in a hospital bed complaining Ukrainian extremists attacked him and other peaceful protesters in Rossiya one. 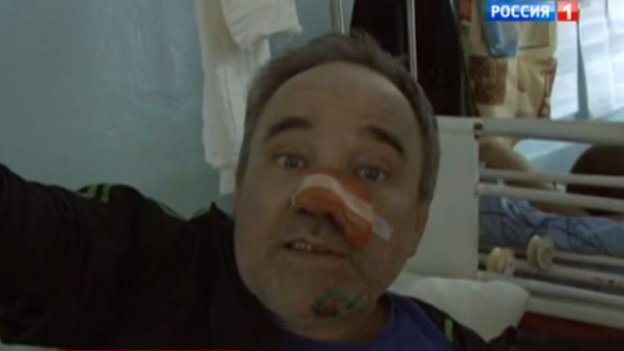 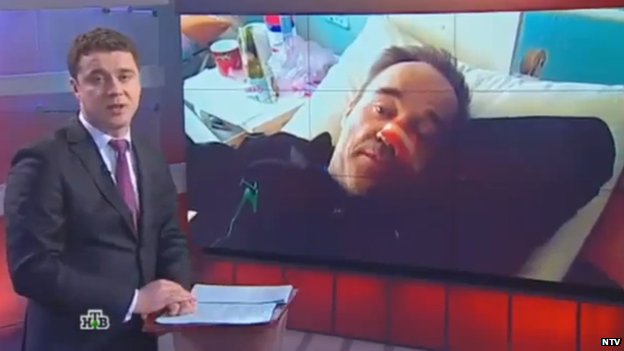 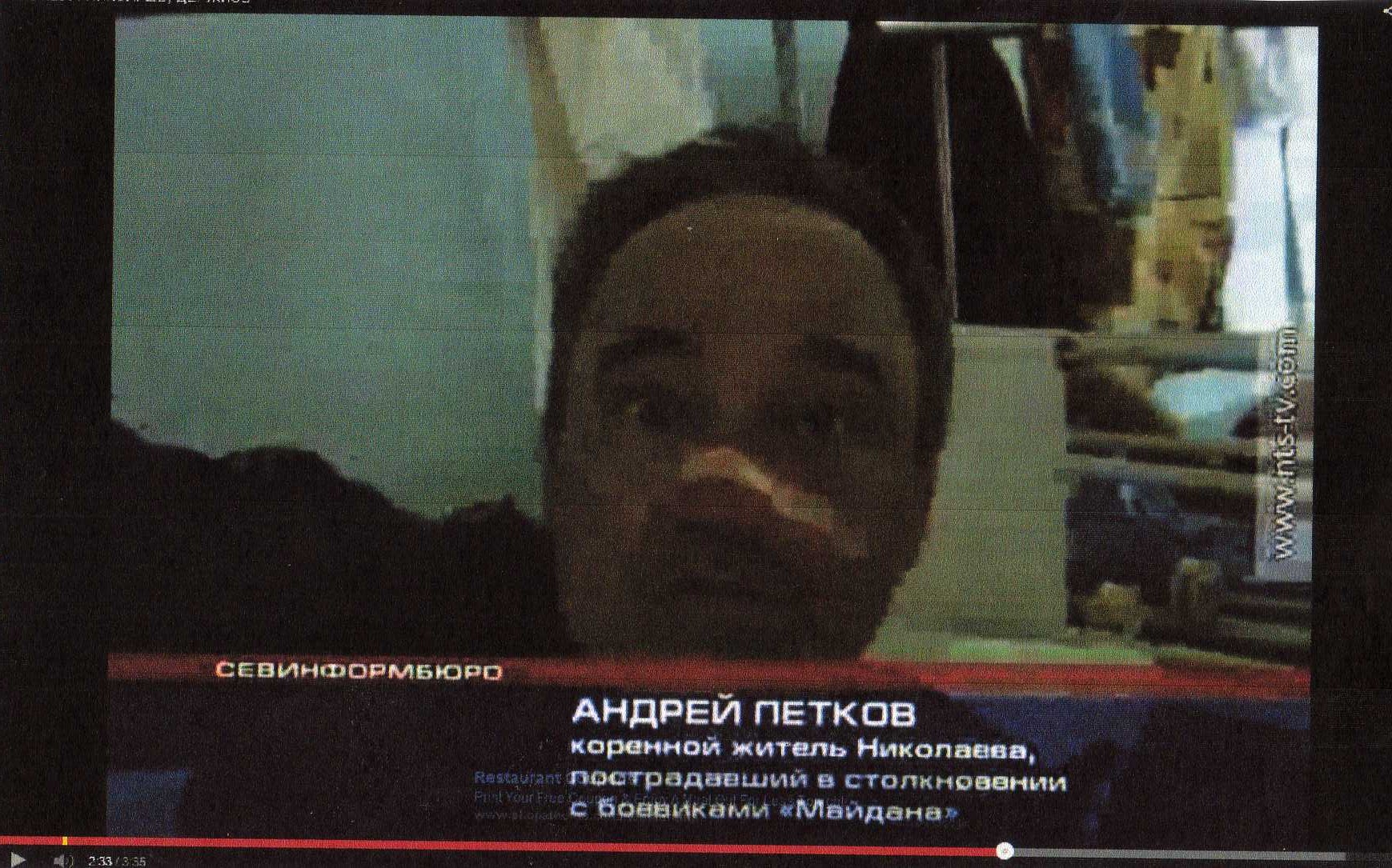 I included his stories as well

On Rossia 1 national news (Vesti), Petkov describes himself as an ordinary citizen of Nikolayev, who went on April 9 “as usual” to protest against the new Ukrainian government. At the demonstration, he was attacked by Neo-Nazis and ultra-nationalists, who had been escorted into the city in busses by the Ukrainian police on orders to disperse local demonstrators by force. Petkov testifies that the radicals opened fire on peaceful demonstrators using weapons given them by Europe and the United States. (His interview is interrupted by traumatic scenes of fleeing civilians, rapid gunfire and exploding grenades). Petkov declares that he suffered a brain concussion and other gunfire wounds, which will leave him incapacitated for six months. Petkov, himself, appears to have only a bandaged nose, and the camera crew shows no pictures of the other “heavily wounded victims of the shooting.” They, with the exception of Petkov, appear to have been dismissed from the radical-controlled hospital only one day after the shootings.


NTV national news conducted an “exclusive” interview with the same Petkov, in the same hospital bed, with the same bandaged nose, only this is an entirely different Petkov. In a contrite voice, Petkov confesses he is a German spy for a secret European organization. Since he left his native Nikolayev in 1992, he acquired several citizenships and has German, Ukrainian and Russian passports. Petkov claims to own fifteen gerontology clinics in Germany and a chateau in Switzerland. This Petkov has done well for himself. Petkov says that he flew in from Germany, where he lives, with a half million Euros, which he received from a secret group he refused to name. He bought weapons and hired a squad of fifty European mercenaries to put down both Nikolayev’s civilian protesters against new Ukrainian government and radical neo-Nazi intruders from Kiev. He wanted a “civilized” solution, but in the melee he fell afoul of the Ukrainian extremists, who shot him in the leg and nose. He had to beg the “creepy young” Ukrainian extremists for his life. He is currently waiting to be operated on and is in the hospital under special security protection.

The National Independent Television of Crimea interviewed a third Petkov, in the same hospital, same hospital garb, and same bandage on his nose. This Petkov is noble pediatric surgeon who saved the lives of over 200 infants and who returned to his native city of Nikolayev with an “indefinite” sum of his own money to help organize local protesters against the new Ukrainian government. Attending the nighttime demonstration as an innocent bystander, he found himself caught up in a nightmare of exploding grenades and rapid gunfire from the neo-Nazi extremists. As a physician, he attempted to tend to the wounded carried into tents, but the extremists fired into the makeshift emergency facility. During the shooting he himself was wounded in the nose and leg. The defiant Petkov declares that he is not intimidated. He will personally continue to resist until justice is achieved.

I guess we knew they had 'crisis actors', heck they probably have divisions of them.

posted on Apr, 12 2014 @ 02:17 PM
link
That's funny but as far as I'm concerned nothing beats the Chinese media broadcasting remarks by astronauts talking to each other in orbit...12 hours before lift-off.

posted on Apr, 12 2014 @ 05:07 PM
link
Wow. Maybe all three stories are true, lol. I didn't see anything that jumped out right away that said they couldn't all be true, or contradictory, but of course this guy would have to be superman. He would be a baby-saving German neurosurgeon spy who was attacked by Ukranians. Or something like that anyway. I want to meet this guy.

Obviously the odds are that Russian state TV is at it again. Stuff like this actually occurs in America as well, and the media has been caught using the same footage while claiming it is from two different areas...But this is a bit different I suppose. Although there are some who claim the government has used the same people, who pose as different people, during disasters, terrorist attacks, and stuff like that. I don't know if any of that is true, but it has been claimed.