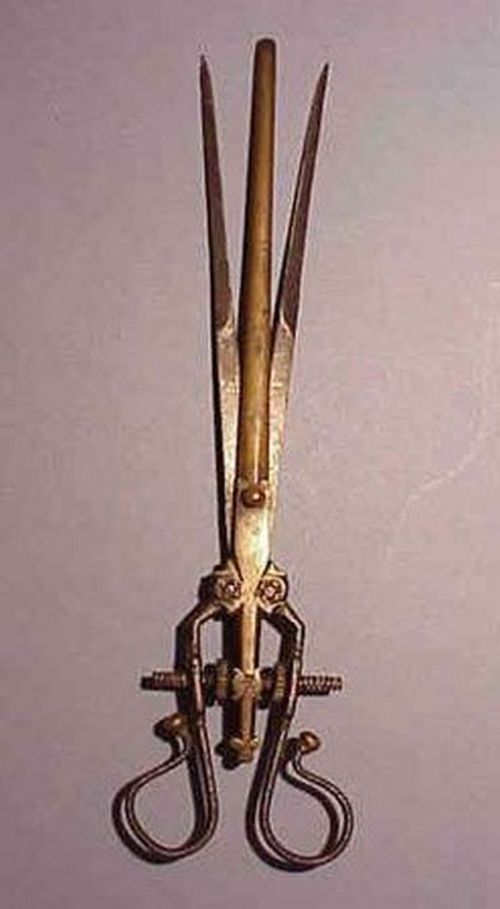 It's older than that but you are absolutely right in that it is a surgical instrument.
edit on 23-4-2014 by pennylemon because: (no reason given)

It is an extractor but not for teeth.

And please tell me it wasn't once used for abortions....

My goodness no Doodle, I'm keeping it a bit more lighthearted. This would however remove something that the removee would be happy to have removed.

Nope, not a leech puller.

The surgical clue gave it away. I'm old but not that old :-)

Not much is known about this tool, but it is hypothesized that it was inserted into the wound in a contracted position, with the central shaft used to grasp the arrow. The blades, which appear to have their sharp edges facing outward, were then expanded using the scissor-like handles, thus expanding the flesh around the arrow to prevent the arrowhead from ripping through the meat as it was pulled out

Very nice Mr. Limpet. A wicked tool indeed, I wonder how many decided to take their chances with the arrowhead.

The torch is now yours.

Other than the StinkHorn mushroom that the talented members of ATS already guessed...... I don't have any other "what is that" pictures to post.

Guess what song this lyric is from?

It's one of the most popular songs ever. On the top of the charts for 14 weeks. Should be recognizable to the young and old.

I hope life treats you kind

Thats from "i will always love you " one of many great songs written by Dolly Parton.

ETA: Well now you've gone and started me singing
edit on 23-4-2014 by pennylemon because: (no reason given)

1st guess! That's right! I had forgotten it was originally written by Dolly Parton.

Passing the torch back at ya :-)

I hate to guess and run but this old lady is heading off to bed. I pass the talking stick back to the game for those of you that might be posting into the wee hours.

Wait, stay awake, I need somewhere to post this:

1920 was a very bad year for Polish chessplayers named Gersz (I did a thread in skunk works www.abovetopsecret.com... )

As for the thing we're trying to guess, oh no, not going there, not getting close to that thing. EDIT: Oh, it was guessed already. An arrowhead remover? Yikes.

Sorry Aleister, depite all my best efforts, sleep got the best of me.


Post whatever you want. I just gave birth to the game out of my mindgina.
But if we were playing Poker, Backgammon, Chess or Go? I'd be a stickler for the rules.
House rules really piss me off at Monopoly too!! Grr.. lol


1) These are around the world.
2) The Man who made these was very famous.
3)He made his very 1st Sculpture at age 20 in 1949 when he got stuck in a mine shaft for 3 days, using only his hat for light and a pick axe till rescued. In the wall he carved a beautiful life sized woman, which he later painted with a red spanish top & black mini skirt with a slit, real looking skin tone, rea looking red hair, blue eyes & red full lips. Today it is still a tourist attraction in the Sherridon Diamond Mines in Lynn Lake Manitoba, Canada where Singer of Red Rider''s Tom Cochrane was born and raised who I had the pleasure of singing with in Minneapolis, Minnesota .USA
4) Another of Lynn Lake's tourist attraction is 4 of his life sized sculpture at the town's Legion Hall, where he was initiated into a secret society, the life sized sculptures are of his brother in his WW11 Decorated Uniform, himself in his Miner's Uniform, & a Nurse sitting in a wooden chair holding a life sized baby girl.
5) He ONLY used an axe, pocket knife, 3 files, till the 1980's when he began using an old cheap drill for hollowing out certain things like peace pipes, ends with Chief heads, Buffalo, etc.
6) He was also a musician who could sing tenor, opera, and folk as well as being able to play ANY instrument within 5-10 minutes of picking them up or sitting at them, including bag pipes, all extremely well, traveled the world, yet only making guest appearances with well known bands and singers.
7) In 1980-85, he taught Sculpting in a Toronto, Ontario, Canada University.
8) The 2 full sized Buffalo outside of Winnipeg, Manitoba. Canada's Legislative Building, on each side of the doors,, now inside, were sculpted by him, there'd been some vandalism so he repaired them and the City had them bronzed yet the plaque only shows the Bronze's name but the underside of their jaws has his name.
9) ALL his sculptures were made from various types of rock like, Gyprock, Marble, Soap Stone, Crystal, Agate, etc, though most of the rock came from various Manitoba Canadian Mines.
10) Almost all his sculptures were themed and had a story.
11) He didn't marry till he was 35 and had only one child who has his and his wife's abilities in music and art, his wife a famed clothing designer and more.
12) He owned his own huge business/s for 36-40 years till due to a heart condition, had to retire at 64.
13) He continued to Sculpture even, especially after his retirement, keeping most in large or singular specially hand made wooden and glass show cases which filled 3 entire walls of his fancy basement that American and European tourists frequented.
14) He donated a fair amount to bank, Political offices, etc, till he decided to keep most as a special retirement safety net.
15) He came from Austria as a young boy.
16) He passed away at age 85, February 2013.
17) His works sold anywhere from $3000, 00.00 to $ 15000,00.00 While he was alive.
18) This coming fall, there will be a huge auction on his and his wife's works as she predeceased him though 16 years younger, in 2012, and was also famous in similar areas.
19) The Indian and bear were made in 1962. The Unicorn in 1973, and the Woman and Bull in 1984.
20) I am privileged to own about 20 pieces though I have the rest still in storage, not quite sure which boxes

This took me awhile lol, so if something is already up, this can just be a brief Canadian History lesson lol! 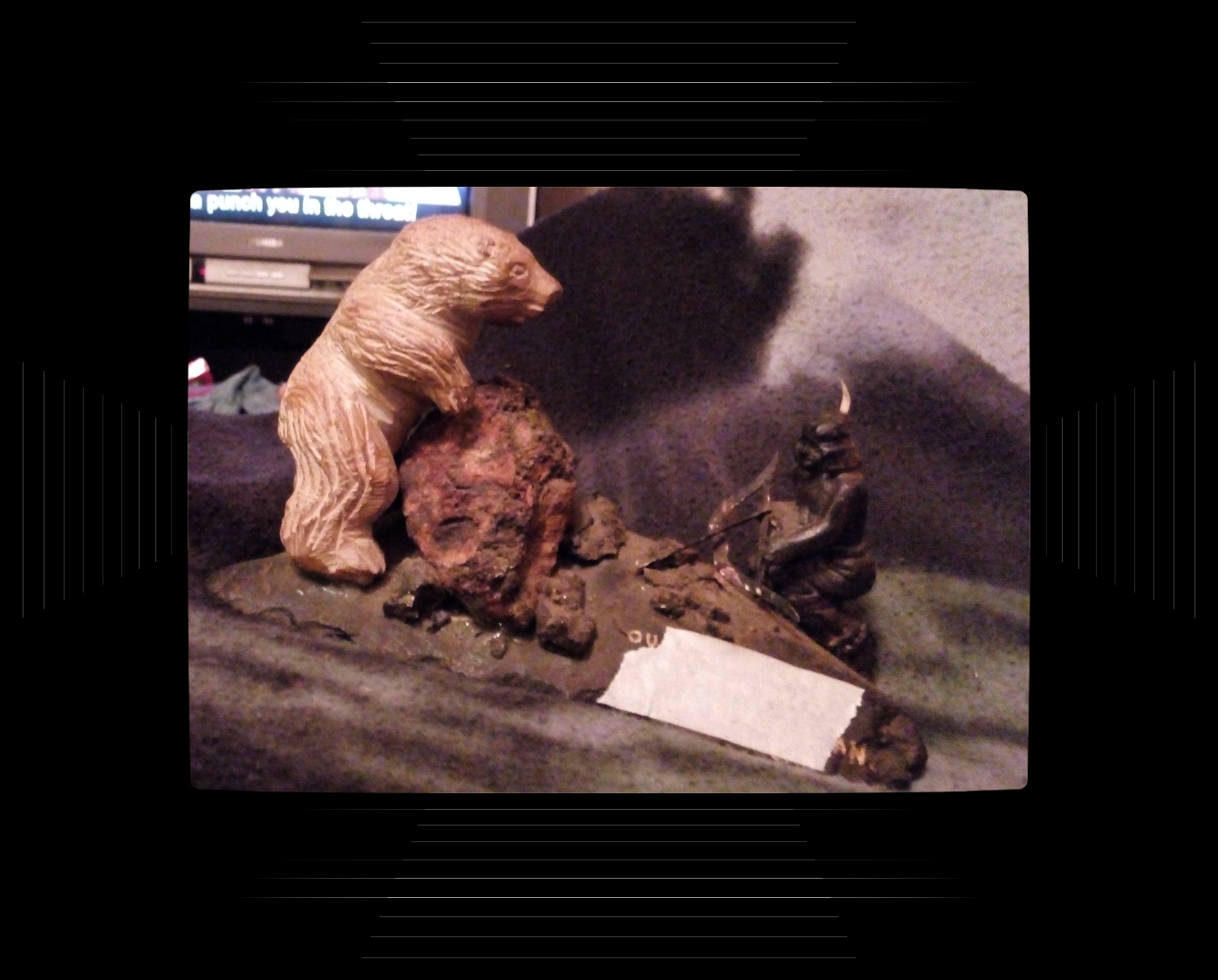 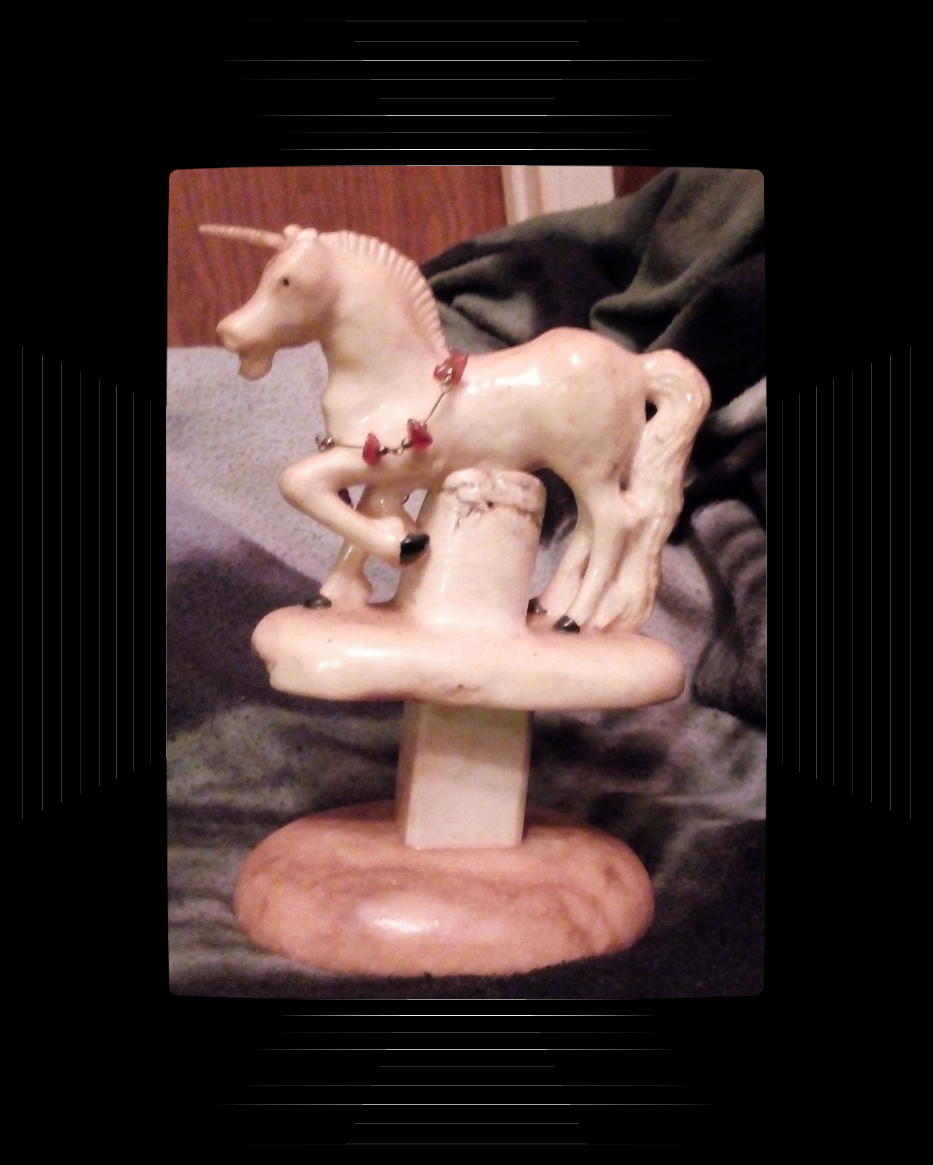 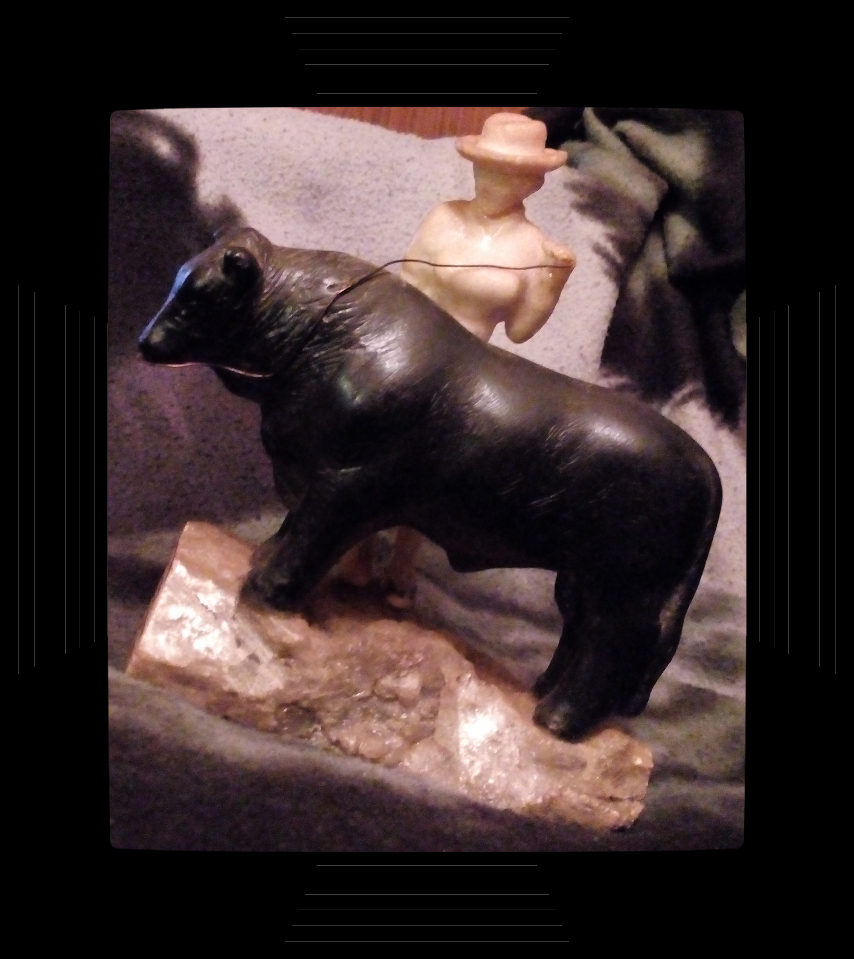