The Ghost of Freddy Jackson

posted on Apr, 11 2014 @ 07:16 AM
link
Now when it comes to the paranormal in the past i was not exactly a skeptic nor a believer, I sat firmly on the fence although I have found my self recently starting to tip over on to the side of the believers recently. This is largely part to a very spiritual yet devastatingly sad experience I recently had as well as some other experiences that are a little too personal to get delve into on a public forum other than to say they have been having a effect on more than just my spirituality but also my general outlook in life.

Anyway, with this in mind I have been looking into what some would call "ghost stories", with a slightly new perspective with a more open mind. Just reading up on some historical examples and I have found loads of interesting stuff, I want to present one such example on this thread which I am sure that many on this site may have seen before, but this was new to me.

The Ghost of Freddy Jackson.

The story goes that just shortly after World War one in 1919 Freddy Jackson was a young air craft mechanic who died in a tragic accident when he was killed by a air craft propeller whilst at HMS Daedalus training facility in the south of England. On the day of his funeral the rest of the his Squadron posed to take this photo. 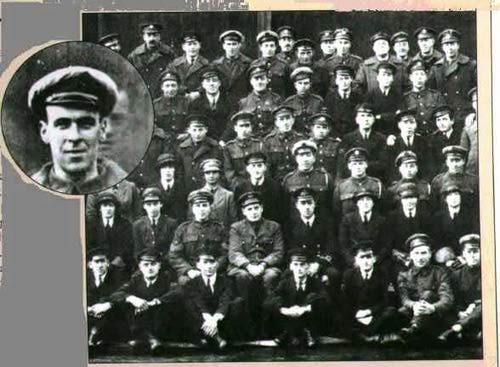 As can be seen, at the top left of the photo a ghostly face can be seen just behind one of the other men.

The men of the Squadron claimed that this was the face of Freddy Jackson, the man whose funeral they had attended that very day.

Now this photo was not released until 1975 by Sir Victor Goddard although having been taken in 1919, I am totally open to a more earthly explanation than a ghost.

But all the same its a pretty cool photo.

posted on Apr, 11 2014 @ 07:27 AM
link
Wasnt Victor Goddard the guy that said he saw a wwII airport with wwII planes an uniforms years before? I search for it but wikipedia only have this

The film The Night My Number Came Up (1955) was based on a strange incident in Goddard's life. In January 1946, he arrived at a party in Shanghai to overhear an officer talking of a dream in which Air Marshal Goddard was killed in a plane crash. The aircraft in the officer's dream iced over and crashed on a pebbled beach near mountains with two men and a woman on board. Goddard himself was due to fly to Tokyo that night on a Dakota and by the end of the evening he was persuaded to take two men and a woman with him. The plane iced over and was forced to make a crash landing on the Japanese island of Sado; the crash scene, a pebbled beach near mountains, resembled that described in the precognitory dream. Unlike the dream, however, because of Goddard's precautions no one was injured. Michael Redgrave who played the Air Marshal, was depicted in the film as becoming excited as the plane made its crash landing; this seriously annoyed Goddard, who had been proud of what he had seen as his unemotional behaviour.

I know they are all saying that this image looks like Freddy Jackson. I wish there was a picture of Freddy that we could compare it too. I've looked and never found one - so we are taking people at their word. People often see what they want or expect to see, so it's hard to know just how much this image resembles Freddy Jackson.

I'm generally skeptical of ghostly images because there are so many common non-paranormal explanations for them, but this is one of the more intriguing ones.

FLIGHT INTO THE FUTURE In 1935, Air Marshal Sir Victor Goddard of the British Royal Air Force had a harrowing experience in his Hawker Hart biplane. Goddard was a Wing Commander at the time and while on a flight from Edinburgh, Scotland to his home base in Andover, England, he decided to fly over an abandoned airfield at Drem, not far from Edinburgh. The useless airfield was overgrown with foliage, the hangars were falling apart and cows grazed where planes were once parked. Goddard then continued his flight to Andover, but encountered a bizarre storm. In the high winds of the storm's strange brown-yellow clouds, he lost control of his plane, which began to spiral toward the ground. Narrowly averting a crash, Goddard found that his plane was heading back toward Drem. As he approached the old airfield, the storm suddenly vanished and Goddard's plane was now flying in brilliant sunshine. This time, as he flew over the Drem airfield, it looked completely different. The hangars looked like new. There were four airplanes on the ground: three were familiar biplanes, but painted in an unfamiliar yellow; the fourth was a monoplane, which the RAF had none of in 1935. The mechanics were dressed in blue overalls, which Goddard thought odd since all RAF mechanics dressed in brown overalls. Strange, too, that none of the mechanics seemed to notice him fly over. Leaving the area, he again encountered the storm, but managed to make his way back to Andover. It wasn't until 1939 that that the RAF began to paint their planes yellow, enlisted a monoplane of the type that Goddard saw, and the mechanics uniforms were switched to blue. Had Goddard somehow flown four years into the future, then returned to his own time?