posted on Apr, 10 2014 @ 07:39 PM
link
If anyone is from or familiar with Middle/Eastern TN, maybe you are familiar with Jamestown. I lived there for a few years during my youth. After becoming an adult, I moved back to TN, though not Jamestown. I spent the first few weeks back visiting with old friends there and making new ones. Ones of my new friends took me (and some others) to a place north of Jamestown, known to me as "Blacktop". I know you can see Kentucky from there, but not being a native to the area, and it was night, driving through the mountains, I have no idea how to get there. Anyway, this dude took us to a cemetery on top of the mountain. He pulled right up to it (it was fenced in, very small) so we could see the creepy statue of Jesus tearing his chest open to reveal his bleeding heart. As if that weren't disturbing enough, the walkie talkies we had started going crazy. I assumed the guy was just messing with us, but he showed that the walkies were turned off. On top of that, we pulled the batteries out, and they kept screeching. We got the heck out of there as fast as we could!

My reason for sharing this is, aside from sharing my experience, I have lost touch with the fella that showed me this place, and I would kinda like to revisit it, during the day I am hoping, maybe...... One my fellow ATSers may be privy to this area and the secrets it holds.

posted on Apr, 10 2014 @ 08:29 PM
link
Glad you figured it out! If/when you get back there, do take some pics, some evp if you're able to, but bring a friend! Never ever go paranormal investigating or even ghost hunting without someone with you.

Oh I hope you find something compelling to kind of explain what happened that night. And do get a pic of this statue. It seems creepier than anything, the way you described it.


Sounds interesting.
I'm down to investigate the paranormal.
I live in middle tn about an hour from Jamestown.
Let me know if you want to go.


I'm a chicken.... but, my brother is totally into investigating! If we can get a group together, I could get the nerve to go at night. Day time wouldn't be a problem though. I'm am hour away from Jamestown too... I wonder if we are in the same area?


I'm in the woods between cookeville and Monterey.
Let's figure something out.
Sounds fun!


It would have to be this summer, when I'm out of school and I can easily send my kids to grandparents (which is also a lot easier during the summer). My brother is going to California to work for a couple months, and I know he really wants to go too. I will let you know when we decide to go.

Between Cookeville and Monterey..... My husband and brother were in Monterey last night to check out an item from lsn. It's a small world!

Sounds good. Summer it is.
I also want to do some exploring in the Catoosa Wildlife Management area.
I've hear reports of Bigfoot out there.
Any interest in digging up a possible Bigfoot tribe?


Sarra.... I think we will try to find the place sometime this summer. I will be sure to get some pictures of the statue, and hopefully by then I will figure out how to upload pictures here for you to see! I'm excited!

Is this the statue of Jesus you are talking about? 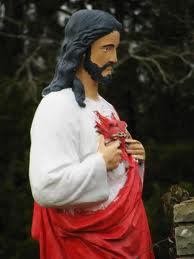 
Located at Mt. Lebanon Cemetery along old Murfreesboro Rd. (old US231) in Wilson County, TN. If I'm interepreting the symbolism correctly, Jesus is showing us his heart and his white robe is blood soaked


Nope. That's the general idea, but it wasn't painted, and quite morbid. It was about 9 years ago, so I'm not sure if it's my memory embellishing it or not (as our minds tend to do), but I recall the heart also being wrapped in a "crown of thorns". I will do some googling to see if I can find something comparable.

Edit: I am not finding anything on Google that looks like the statue I saw. I really wish I was still in touch with the guy that took me there. I believe he is on Facebook, but never got to communicate with him before I deactivated my account. I'm tempted to reactivate in order to see if I can track him down and get more info.
edit on 11-4-2014 by chelsdh because: add
edit on 11-4-2014 by chelsdh because: spelling


My husband just told me that a few years ago (I'm thinking 10+ years, because I have no memory of this), the paper here featured a story about Bigfoot hunters coming here to investigate some sightings. I couldn't believe he had never told me about that, but he insists that he thought I knew about it.


You have to be careful in these Tennessee mountains. Yes, we do have Big Foot roaming around, among lord only knows what else!

I have two different friends that have ghost hunting teams. I'm sure they would both love to know where this place is, and directions on how to get there, if you don't mind sharing. Maybe send me a U2U?


This is one of the most prevalent images in Catholicism; it is a depiction, in this case, as is common in Catholic cemeteries, or among Catholic burials otherwise, of the Sacred Heart of Christ in the form of statuary. It is more commonly depicted graphically, such as in a stained-glass window, or in holy cards; the heart is often depicted on fire.

In the Catholic Church there are two Sacred Heart symbols, that of Christ, and that of Mary--they are complementary images, as is the relationship of these two core figures themselves; the Crown of Thorns atop a disembodied heart indicates the Sacred Heart of Christ (which needs no further explanation of the symbolic correlation, Christ having borne the tribulation of wearing such a crown during his Passion); and a disembodied heart surmounted by a Cross is that of Mary (she having witnessed the Passion during which Christ was Crucified). All schools run by the Convent of the Sacred Heart worldwide use these images, and many such private Catholic schools even feature this same statue, as well as many Catholic churches and cathedrals worldwide.

There is nothing esoteric or hidden about the use or history of this image, in sculpture or in graphic work, only your own unawareness of cultural and spiritual norms outside your own, which, in this highly secular age, is not innately deserving of admonishment or ridicule, but a symbol dictionary or research conducted outside of something as ubiquitous as Google could have yielded the explanation more readily for you.

However, regarding the supposed paranormal encounter linked to this particular location the OP describes, that itself is more compelling. It is also unusual that a Catholic symbol might be used in so remote a burial in a location otherwise decidedly Protestant, though this itself is not unheard of.


I was very struck by the use of such a strong Catholic burial. The area still has very few Catholics, and I have a hard time imagining it having many in the past, although they were obviously there.

Thank you for the explanation of the above images. I recognized the statue I saw as a rendering of the Sacred Heart, but what I recall was quite grotesque and disturbing. However, I do realize it has been nearly a decade and our memories are not infallible. My brother also remembers it being morbid too, so I'm inclined to think my recollection is not too distorted.


It goes without saying--and indeed, is often a criticism levied by many against the Catholic Church among several--that there is a particular morbidity and moroseness of the emphasis on such grotesque imagery--adoration of a Crucified man, himself utterly naked and emaciated, saints depicted in the method of their grueling executions, sometimes carrying their own dismembered body parts, even Christ himself producing his own burning heart from his own chest--so perhaps the sight of such a depiction might have been amplified in its seeming eeriness when you first encountered this place, given also the hour at which you did, and the interference of the radio devices.

Demographically and historically, as you concur, there is little Catholic presence or precedent in the region you describe, and that there would be in so remote a spot is also itself unnerving, only insofar that it does not complement existing data, but Catholicism being the Universal Church (regardless of claim or belief, its linguistic origin, "Katholikos", is Greek for "Universal", hence its name), so maybe its faith penetrates even the wilds of the rural United States in otherwise Protestant regions.

It is not unusual for depictions of such standardized Catholic symbolism to deviate from what its traditionally used, some statues might be more "grotesque" than others, others more "cartoonish", so your statue you encountered very well could have been a more emphatic gesturing of this traditional depiction, which would be plausible given its supposed age--an age, perhaps, in which more realistic, more disturbing depictions of mortality, especially Christian corporeality, might have been more-accepted than by our own toned-down expectations today.

Or, the contortion you describe the statue as having possessed very well could have been sculpted with a malicious intent, or in the utterly paranormal sense, what you saw was some distortion of the otherwise devotional figure being perverted before your own eyes. Regardless, it is a compelling encounter, and one which poses great interest to share here.