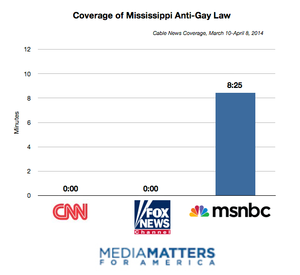 CNN and Fox's failure to cover the Mississippi law is the latest reminder of the media's short attention span. Mere weeks after key Fox personalities condemned the Arizona bill, many of those same personalities went right back to defending anti-gay discrimination this week, after the U.S. Supreme Court refused to reconsider a New Mexico Supreme Court ruling that a photographer had violated the state's non-discrimination law by refusing to photograph a same-sex commitment ceremony.

CNN, meanwhile, continues its hours upon hours of obsessive speculation over the missing Malaysian jetliner.

As Mississippi wages war on LGBT citizens' basic rights, two of the nation's leading news outlets apparently have nothing better to offer than silence.

Said Harris-Perry in her video message:
It’s not like the people of Mississippi are under the thumb of onerous state laws that protect LGBT people. Same-sex marriage is banned in Mississippi by constitutional amendment. You can’t even have a wedding for a vendor can refuse to work!

And you can already be discriminated against for your sexual orientation in Mississippi. You can be fired or not hired just for being gay. You can be denied housing. So, governor, what you did was make it even easier than it already was to discriminate against LGBT Mississippians. To deny them services available to everyone else. Basically, you gave bigots yet another avenue to dehumanize their LGBT neighbors.

I am not gay, nor have I ever been bisexual, but I have had several gay/lesbian friends throughout my life who I have come to know and love very much. One such friend decided to commit suicide Dec. 24th, 2013 because of the personal persecution his family directed toward him, mainly his father.

I am upset by this. . . deny food, jobs, housing? Really? In this day and age. Did they not learn anything from the years of persecution other minority groups faced in there states history. And as for CNN and the other big MSM sites, was this not important enough. Did the ratings from the recent events in Arizona not show an interest in this topic anymore?

I just wanted to throw this out to the masses here. It is a small story affecting a large group of people. I have come to respect the opinions of many of you here at ATS. I don't know if this is important to you all, but I believe in a world where we are all equal.


Discrimination of any type on any level should not be accepted.

I agree with what you said about how in this age it exists is unbelievable. For some reason racial hatred seems higher now than it seemed ten or fifteen years ago.

As far as sexual preference goes I couldn't care less. Who you do your sex stuff to is your business. (as long as you aren't abusing children.)

I don't discriminate against anybody, I'm an ass to everybody regardless of your religion, sex, age, race or nationality.


Before debating, maybe somebody should post up the actual law.

Check the wording and then make the implied lingo.


I think this is it: Religious Freedom Restoration Act

It doesnt really say anything. Just that Miss will abide by some federal law of the same name from the 90's and all the state offices have to use stationary with a certain symbol on it.

From the POV of a "discriminated class" I'd think having your enemies be open about their ways would be nothing but beneficial.
Just look what happened to the very short-lived CEO of Mozilla a couple of weeks ago and all he did was donate some cash.
edit on 9-4-2014 by thisguyrighthere because: (no reason given)

Why do you care if they stare? Is it little? Do they giggle?

Just go about your business or talk with people and explain it makes you uncomfortable.


I would take it as a compliment, I always do!


Thank you for that tgrt!


Do you really need to come in here and show the world how much of a bigot you are.

Maybe they are returning the stare from you?

Or they haven't seen one that small before...


Whether or not his discomfort is rooted in homophobia it is still very uncomfortable to be ogled. Just as any woman.


Not really. I don't care if somebody looks / stares. I just figure they're jealous. I'm confident about my sexuality and my penis prowess.

posted on Apr, 9 2014 @ 06:34 PM
link
What exactly is the wording of the law? If it's outright discriminatory and allows anyone to deny a service of any kind to anyone they dislike, that ain't right on a multitude of levels.


Hey now, avoid beaches and pools then, people ogle each other all the time, straight or gay. I've admired more than a few rockin' bods of other women myself, and I'm straight as an arrow. If you look good, you look good, don't knock it.
edit on Fri Apr 11 2014 by DontTreadOnMe because: (no reason given)

minusinfinity
Just go about your business or talk with people and explain it makes you uncomfortable.

Oh shove it. Not everyone wants to be "checked out". Especially not after lifting, I know I don't and I don't have anything against gays in the locker room.

As a person who has nothing against gays or straights, I honestly don't care who uses the lockers and other things like that. Heck, I say welcome women too!

I also don't care if this law passes or not, it'll either prove how stupid or how smart some people are. We'll just have to wait and see.


Why do people think that gay men stare more than straight men, seriously, why do people need to fear that someone might be staring.

Behing gay does not make you a pervert or a monster.

Oh and looking at someone and harrasment are two different things.
edit on 9-4-2014 by dukeofjive696969 because: (no reason given)


I wonder why those news channels didn't see the story as newsworthy?

For such a great nation the US still has a lot of social issues, with supreme courts condoning discrimination. This is something you would expect of some backward third world nation.


Did you tell me to "shove it"? How very clever of you.

Why don't you just let people live? If someone looks at you on the street do you become offended?

What is the problem if someone looks at you in the locker room? Of course if they stare or make you uncomfortable then you should feel free to confront the person.