posted on Apr, 9 2014 @ 05:29 PM
link
Now I don't always get American politics, but shouldn't they at least stick to their own semantics? The way I see it, America had the option to make ones health his own private business, taking people diying on the doorstep of hospitals, or giving care and aid to everybody with the public footing the bill. Medicaid was paid by everybody whom paid taxes I presume, out of the governments coffers, while Obamacare is an effort to shift the costs of health care away from the public, to those whom profit from a healthy workforce.

So while it isn't the pay or die world that only the most extreme idolizers of capitalism promulgate, shouldn't at least conservatives be happy with shifting the burden of healthcare away from the government, unless conservative has become a coverword for big buisness interests, where socialism/communism is quite welcome if it means somebody else is paying your bills rather than taking your profits.


Well I cant afford it. I will be taxed if I dont sign up to the exchange. Thats awful, you know, being forced by your government to buy a product a private company offers.

Also I dont like the fact that it is basically a bailout for insurance companies. They should F-ing fail. No one likes their service and as a business they need to die so new, more competitive businesses can take their place and offer better services and products...(capitalism). The way it is all written makes it an obtrusive power grab by the executive branch of government as well.

I also dont like the fact that all premiums have skyrocketed. It is no small thing that what some people paid before without insurance will be 4 times more expensive with it.

Oh, and no one asked. We arent ass hats that we are going to believe that our government is doing this out of some noble desire to help us. To even imply that much is an insult, is asinine, and is just retarded.

How about you stop taxing us up the ass, then we can afford to live like the middle class we were, which included healthy life styles: full time employment, nice houses, cars, clothing, vacations, good food, and gym memberships.

We were healthier. Now, we are poorer and sicker, all of us.

And they are 'socialist' programs.

Obamacare only expanded medicaid. Which brings us to the so called 'uninsured'.

The US government was denying 'healthcare' to the poor ?

Those people with 'preexisting conditions' .

Because that is what medicaid was created for.

For those who 'fell between' the cracks.

But what Obama, and the left did is what they did with auto insurance.

For those paying attention to medicare, and medicaid that can't fund themselves.

And for all 'intents and purposes' is socialized medicine that has more people on them than most EU countries entire populations.

Whose job is just to pay peoples GD hospital bills.

Yeah it was another helping of stupid only getting more stupid.

They said 7 million got 'health insurance' ?

Obamacare is a joke.

They know it, they don't care.

The only reason it was created was to make health insurance more expensive so they could create that most 'glorious' pipe dream of 'universal care'.

Which is nothing more than everyone using it, hardly anyone paying for it, and created the largest monopoly this country has ever seen.

Obama care is the GD antithesis of what the word liberal means.

Because it means FREEDOM.

Where is the GD choice of being made to buy something ?

Socialist ideology is destroying this country.

And once again that is also the antithesis of what that word liberal means.

Where is the GD choice of being made to buy something ?

It would seem we are no longer Protected. 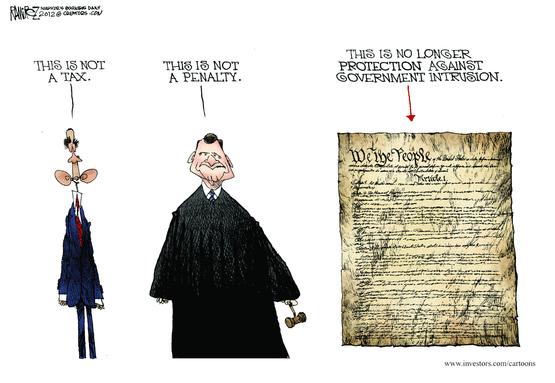 
oh stop it! Jump on the politically corrupt bandwagon and conform to the programming.


Well said Neo , Percise and to the Point . A Fraud


Socialism leads to authoritarianism because u must force people to go along with what a few political elites dictate. If u don't go along with the collective, u are DIVERGENT.


It get's even more ridiculous there.

Private healthcare covers more, and is worlds apart than what government ever 'creates'.

That was until the 'affordable' Care Act was created.

And the horror stories are numerous, and easy to find.

Kaiser Permanente is the 6th highest campaign contributor to Barack Obama, clocking in at $588,386 (Source

Aaand, having been browsing CoveredCA.com to get healthcare before the deadline or get fined, I came to find that...Most of the insurance policies have Kaiser medical networks. Take a look. Shortly after, I opted to stay out of private healthcare forced upon me - The fine is actually cheaper on a salary of 24k/year (Lower middle class). Besides, employment healthcare benefits week-to-week are STILL cheaper than working with Government-Private Healthcare.

Just food for thought. Thanks for reading guys.


Don't worry the Rubpublicans will offer a soulusion in the 16 election cycle and spin it so you believe it is better!

abeverage
YES INDEED! We should have had that SOCIALIST ROMNEY CARE...


Don't worry the Republicans will offer a solution in the 16 election cycle and spin it so you believe it is better!

I totally agree with that.

It will be so whn the republican president push this new health care act, everyone will be like "it has to be better than Obamacare"..

That is enough for people to eat it up.

The whole label of ACA as obamacare is a smear campaign by republicans.

posted on Apr, 10 2014 @ 09:30 AM
link
Gosh, I wish I understood the OP's point... Or that there was an article to explain the OP's opinion, because I am confused as to the position. Perhaps you could flesh out your post a little for the confused among us?


this bill was designed to kill the american economy by off shore bankers
after the us has collapsed they then come in and buy it all up for kraft dinner....
without the cheeze packs

posted on Apr, 10 2014 @ 09:37 AM
link
America had to have already been ruined for this to happen.America was "ruined" long before, people just didn't notice because it was a slow decline. A small loss of rights here, a small loss of rights there, not enough to get people to stand up and say no. After that the government realized they could get more brazen with things like the patriot act. People were just too compliant. Now it is to late.

The patriot act was there so Obamas friends in a couple of the insurance companies could make more money. He was just returning a favor.
edit on 10-4-2014 by calstorm because: (no reason given)