Days after his induction into the WWE Hall of Fame and a return to the company after an 18-year breakup, The Ultimate Warrior has died, according to a statement posted on the WWE website. He was 54. 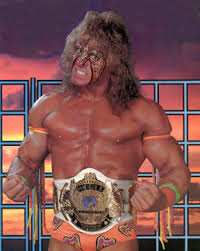 And yet another small piece of my childhood dies.

Thanks for being a kickarse entertainer.

Warrior was born James Hellwig, but legally changed his name to Warrior in 1993. He is survived by his wife Dana and daughters Indiana and Mattigan, who had accompanied him to the podium at the Hall of Fame induction ceremony Saturday night in New Orleans.

You know you love your job when you change your name to reflect your persona.


I remember the Ultimate Warrior. What a loss.


Another piece of my childhood dies as well.

Brings back good ol tv watching days as a boy. WWF, Jake the Snake, Undertaker, Hulk Hogan..... Ultimate Warrior was my favorite though.

Thanks for the memory and closure


The "power powder" became too much. That took longer than I thought, drugs are bad kids. Drugs are bad.


I thought he died like 10 years ago of a heart attack?


I thought he died like 10 years ago of a heart attack?

Maybe had one, but died today.

And drugs are bad, Mmmm K

posted on Apr, 9 2014 @ 03:09 AM
link
Though I never felt that The Ultimate Warrior was all that great as a wrestler, I've always recognized his appeal and ability to play off of the audience.

Regardless of his technical shortcomings, it's truly unfortunate to see someone of his stature in the business pass away, especially at a young age (and 54 is too young for anyone to die).

My condolences to his family.


I am shocked by the passing of the Ultimate Warrior. I loved his intro music. The Warrior wasn't a technical wrestler, but I liked that he had appeal. You knew when the Ultimate Warrior shaked during a match, his opponent was done. I don't follow the WWE anymore. but a bit of young Rosswelloldmexico is diminishing through the passages of time.

Thank you Jim Hellwig for the entertainment you provided when I was young. May you rest in peace in the squared circle upstairs.


That's what I'm saying, I swear I remember him dying a while back


I am speechless right now. I watched the Hall of Fame inductions the other night and was delighted by his speech and love he showed his daughters. R.I.P to a great entertainer.

posted on Apr, 9 2014 @ 09:10 AM
link
I always thought it was funny that he was supposed to be this big tough guy yet dresses like a girls bicycle. Either way I used to watch him when I was a kid so rest in peace buddy.

seems that my childhood heros are dying off god I am getting old
edit on 9/4/14 by freedomSlave because: (no reason given)


The Ultimate Warrior dying years ago was an old, weathered, urban myth


Fond childhood memories watching the WWF, remember staying up late and watching Warrior 'beat' Hogan at Wrestlemania 6 as a 12 year old...I was so happy (silly I know) just pure childish joy, same as the above poster, a bit of my childhood died today too...same when Andre the Giant died too.

posted on Apr, 9 2014 @ 07:32 PM
link
He finally made peace with McMahon and Hogan after all these years. Reminds us all how important it is to let go of bad feelings toward others and not hold any grudges.

posted on Apr, 10 2014 @ 10:52 PM
link
A lot of us looked up to him, admired him, missed him and were so happy to see him back and making-up with the wrestling community. His fans never left him and never will. I am so happy to had have him as my favorite wrestler all these years. I will miss you childhood hero.

posted on Apr, 11 2014 @ 02:21 AM
link
The past thirteen months that we as wrestling fans have ever had to endure. Just last year, the wrestling world and the wrestling fan lost wrestlers from Doink the Clown to Maurice "Mad Dog" Vachon. 2013 was also the year that the wrestling world lost perhaps one of its greatest characters, personas,managers, or storyteller of the industry in William "Paul Bearer" Moody. It seems that 2014 is off to the same way that 2013 started. We all know that King Mabel/King Viscera/Viscera/Big Daddy V Nelson Frazier passed away in February. We didn't think that this was going to happen to The Warrior now since he had just been inducted in the the WWE Hall of Fame. Like a lot of us that have posted in this thread, my brothers and I grew up watching Warrior, Paul Bearer, Doink on television every weekend. Whether it be the antics on the way to the ring or before the match or the way he wrestled. We all found something in the Ultimate Warrior that we could all love and that is what kept us tuning back in every week. Back in just to see what he would do each and every time.

I was ecstatic when I found out last year that he was going to be inducted into the WWE Hall of Fame. This meant a chance for myself and the rest of us to see something that we hadn't seen in twenty years. The Warrior on a World Wrestling Federation/Entertainment produced and a broadcast overseen by Vince McMahon, Jr. I think that whatever it was that caused this rift between himself, McMahon, and the WWF/E had came to a point where he just said that he was tired of this rift that had came between him and McMahon in not only their professional life, but in their personal lives as well. Whatever it was they talked about thoroughly that brought about them just putting their past issues and bygones aside and reconciled with each other. I also believe that Paul Levesque, Triple H, had a hand in getting them together so that they could reconcile with each other.

Another part of mine and my brothers' childhood died when we found out that he had indeed passed away. I mean, we all saw him both during the Hall of Fame induction and on Monday Night Raw the next night after WrestleMania. Just for him to collapse and pass away the next night right in front of his family was both shocking and depressing. Just to think that we saw him in what amounted to be his final days on Earth. Did he know something that we did not know or even begin to wonder about? Myself and several others believe that he may have been diagnosed with a terminal medical condition that he did not reveal to anyone, not even those in his family. If he did reveal his terminal illness to anybody, it had to have been revealed to Vince and Paul. With him revealing that and the fact that he was married with kids. They set him up with a deal where his family would be set for decades after his and Vince Jr's passing. If that was the case, only the Ultimate Warrior knows the reason behind it. A reason that we may never know about for years to come.

After Wrestlemania, he came on Raw and did a promo and it seemed as though he knew his time was up..


Wow,that is the first time I have seen Warrior out of costume...and after many years away from watching wrestling. He definitely knew...no doubt at all,that he was down for the three count. I definitely will not forget. RIP