Ah, the sweet smell of raw history. Archeologists excavating the Medieval town of Odense in Denmark recently uncovered some barrels of old poop. Estimated to be about 700 years old, the buried latrines are said to have kept their contents in "excellent condition."
Apparently, they smell just awful.

I think its an incredible find, now they really can see just what they were eating at the time - and they found a lot of raspberries.

posted on Apr, 7 2014 @ 03:00 PM
link
What is the normal time for poop to decompose into nothing? Maybe it was sealed in barrels to act as a sort of time capsule for future historians. It's almost dinner time. Can't talk too much more about this, or it's good-bye appetite!
cwm


Not quite what you'd might want to find on an arcaeological dig, but I suppose that it's going to give them something to get their teeth into, figuratively speaking - of course.

It should provide a wonderful insight into the diets of the people who produced all that poo, not to mention give biologists a field day working out why the smell stayed so pungent after all this time!

Should be interesting to find out why.

posted on Apr, 7 2014 @ 03:06 PM
link
Well this should shut up all the Danish people walking around and acting like their poo don't stink!


They must happier than an archeoscatologist in #.


Haha, be careful when others are eating - you dont want to ruin their appetite


Oh we danes surely do know that our poop smells - You can trust my words, just ask Arken


what a crappy find! LOL

This is pretty cool, Maybe it still stinks as bad because the smell had no where to permiate to as the barrels where barried underground which would keep them sealed and preserved for 700 years.

If there was no exporsure to air then there will be less of a chance that the biological substance in the barrels would degrate or break down over longer periods of time.

I had always wondered, and this will be an important lesson to survivalists here, what was used for toilet "cleaning" tools of self...
...

moss, leather and fabric which were used as toilet paper

Wow I've had some smelly poop but I don't think it would smell for that long.

posted on Apr, 7 2014 @ 03:18 PM
link
Crazy that it still stinks after so long! Talk about well preserved poop! I've always wondered what people back then used for TP and it sounds like they used moss, leather and fabric. Interesting but gross 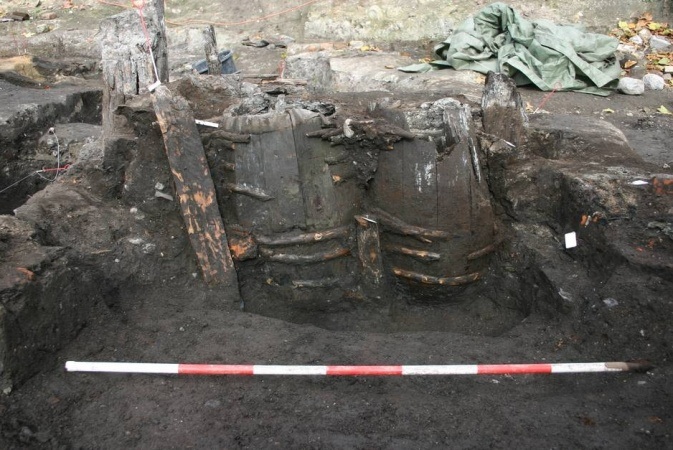 Why study old poop? To find out what people ate in the Middle Ages. "Preliminary results of analysis show that raspberries were popular in Odense in the 1300s. The contents also contain small pieces of moss, leather and fabric which were used as toilet paper," archeologist Maria Elisabeth Lauridsen told Discovery.


Amazing find!!!
And how interesting to know they used leather and fabric as toilet paper....I just assumed most people centuries ago used leaves or washed like the Romans used to.

I wonder if their faeces can also be analyzed to find out what kind of viral or bacterial diseases they had back then....

Thanks for sharing this!

Jennyfrenzy
Crazy that it still stinks after so long! Talk about well preserved poop! I've always wondered what people back then used for TP and it sounds like they used moss, leather and fabric. Interesting but gross

Why study old poop? To find out what people ate in the Middle Ages. "Preliminary results of analysis show that raspberries were popular in Odense in the 1300s. The contents also contain small pieces of moss, leather and fabric which were used as toilet paper," archeologist Maria Elisabeth Lauridsen told Discovery.

I have it on good authority that a( docken)sic, leaf works best.....
However the chances of reawakening some old/new parasite or virus must also be considered....
There may be a great poo virus that is being harboured in those drums....


Oh man and I just sat down to read the boards while eating lunch. Thanks, ypperst! lol

As far as how long it takes poop to decay, it actually can last for a very long, long time just like any other organic material. Corprolites have been found from everything from man (2 thousand year old corprolites were found at some Ancestral Puebloan aka Anasazi sites) to dinosaurs from several millions of years back. Give something just the right environment to slow decay, like being stuffed in a possibly airtight barrel underground, and you're going to find some seriously old poop.


It's OP's like this that remind me of why I love this place.

You just never know what you're going to find here.

And I'll even throw in a Febreze room deodorizer. Now where is that emoticon?...

I just saw an awesome TV show called Filthy Cities. In the London episode in the 1400s there were no sewers and they just cut a hole in the wall for a toilet.

In some streets in London the narrator states "human filth rained down on passers by"!

Not a street you'd want to walk down! You might get dumped on, literally.


Sure wouldn't want to be the one opening those well preserved poop drums!

posted on Apr, 7 2014 @ 04:37 PM
link
I'm not sure if I am more surprised that poop still stinks after 700 years, or that people were actually using latrines that long ago.

You learn something new everyday I guess.