posted on Apr, 7 2014 @ 02:24 PM
link
As part of the “Who do we think we are?” survey published by BBC today these were the nations that we British felt held common values with most. 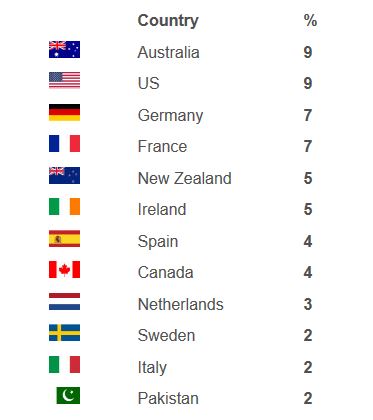 Can’t say I’m surprised by this, except that maybe Ireland would have been higher up there as our closest neighbours.

The US, Canada, Australia, New Zealand and Ireland are all bound to feel closest to us. Our common language and historical links will always hold sway in any survey like this. Plus of course the subliminal influence from movies, TV and music.

However it’s interesting to note that our European neighbours are now almost as highly regarded as sharing similar values. Whilst it often feels Britain has become more Americanised (probably beginning after the end of World War II) it is also true that we have slowly developed a more European outlook as well. This is despite the protestations about the European Union from certain people.

Perhaps most interesting of all was that our nationality is considered less important than our interests, views, outlook on life and even our age group. The growth of the internet has seemingly made us feel more globally connected but we feel less connected to our own nation.

This I was not surprised by either. We are hardly the most patriotic of nations unless we are taking part in an Olympics or the Monarchy is putting on an event of some sort. In most sports we compete as 4 separate nations and globalisation has changed the way we work and take our leisure time.


So what do you think?

And for non-Brits, who do you feel are the nations with similar values as your own?

yeahsurexxx
well as a Swede i'd say Norway, Denmark as the closest.

I wonder how the U.S. feels about countries we've invaded.

Better yet I wonder how those countries feel about the U.S.


When did the English invade?

I'm sure that your refering to historical events, that quite a lot of English people weren't alive for... so it's a bit short sighted to talk about "invasion" when it didn't happen for many people, and many of them weren't involved.

As for feeling any commonality with other nations, I stopped believing in "nationality" a while ago. The idea of being a national of an imaginary area on a map is just as insane as deciding to have a bullet through my brain.

I am me. I am not, American, British, French, Australian, Irish, or anything else-ish.... I am. That is all.

Why should we reduce ourselves to mere labels?? Just a thought.

Perhaps we should let the immigrants have our shells of whats left nations and go somewhere together and rejoin our bloodlines/familial ties and rebuild a new land together for us.

Had the sharia invasion not wrecked Uk I would be clamoring to get there. And, if it wasn't for the third world invasion from the south, America would have me looking to bounce either. And Australia has also been wrecked by it.

As if some outside force is pushing all us into seperate corners, as we are basically in corners of the world.

Where should we go and rejoin/rebuild?

Seriously? We're the same as the French to you?
edit on 7-4-2014 by ColCurious because: (no reason given)

I wouldn't agree with that at all.

Outside of the British Isles, has to be Australia, with Canada a close second.

I'd be happy with just Australia and Canada.

I don't feel any affinity at all with France and Germany, or any other European country - how the hell have they ranked so highly?

If English becomes widespread throughout Europe, I'll feel more connected to my neighbours on the continent; I might even forget about the colonials.

posted on Apr, 7 2014 @ 03:21 PM
link
That's funny because Australians and Canada have always considered themselves to be very close in culture, values etc.

I have to call BS on this report.

Britain and the US? The 2 war mongers of the World who are joined at the hip? The only problem in Canada right now is Harper kissing Obama Butt and he won't be around next election.

yeahsurexxx
well as a Swede i'd say Norway, Denmark as the closest.

If it makes you feel any better, your nations invaded England millenia before the reciprocated.

I feel very close to Mexico, personally. May sound stupid, but if you knew any regular Mexican people, they are among the hardest working and most friendly people I know.

Other than that, US culture is tied closely to UK and Aussie. I have yet to meet an Aussie that I didn't like, that much is for sure.


The survey covered Northern Ireland, Scotland and Wales as well as England. And if history is correct our ancestors from Scandinavia invaded here long before we invaded North America and Australia. Oh hang on we didn't actually invade.
edit on 7/4/14 by mirageman because: (no reason given)

Seriously? We're the same as the French to you?
edit on 7-4-2014 by ColCurious because: (no reason given)

I almost spit soda when I read that!!!!


LOL, well from an American view, I think much higher of the Germans than the cheese eating surrender monkies...er um I mean the French.

posted on Apr, 8 2014 @ 01:12 PM
link
I'm really surprised not to see Japan on the list. I mean, they alternate between extremely polite and extremely barbaric, they drink a lot of tea and they really taught us a thing or two about stiff upper lip during March 2010. I don't think I've seen desperate people form an organised queue for bottled water before that.

Seriously? We're the same as the French to you?

I almost spit soda when I read that!!!!


LOL, well from an American view, I think much higher of the Germans than the cheese eating surrender monkies...er um I mean the French.

Well thank you! And right back at you.