It's Springtime, now it's time again for tornado season. 1 Touched down not too far from me

posted on Apr, 3 2014 @ 07:40 PM
link
Well, Spring is here, and my area is getting hit with its first batch of severe storms at the moment. There's been tornado sightings in a few spots across North Texas in the past hour.

Local news stations are saying there's a tornado moving through Farmersville, and another was spotted a few minutes ago near Princeton.

Plus, there's a few more storms developing to my West, and those are going to hit us pretty soon to.


ETA - Here's a picture of the hail from a bit East of Denton. From Fox4 DFW 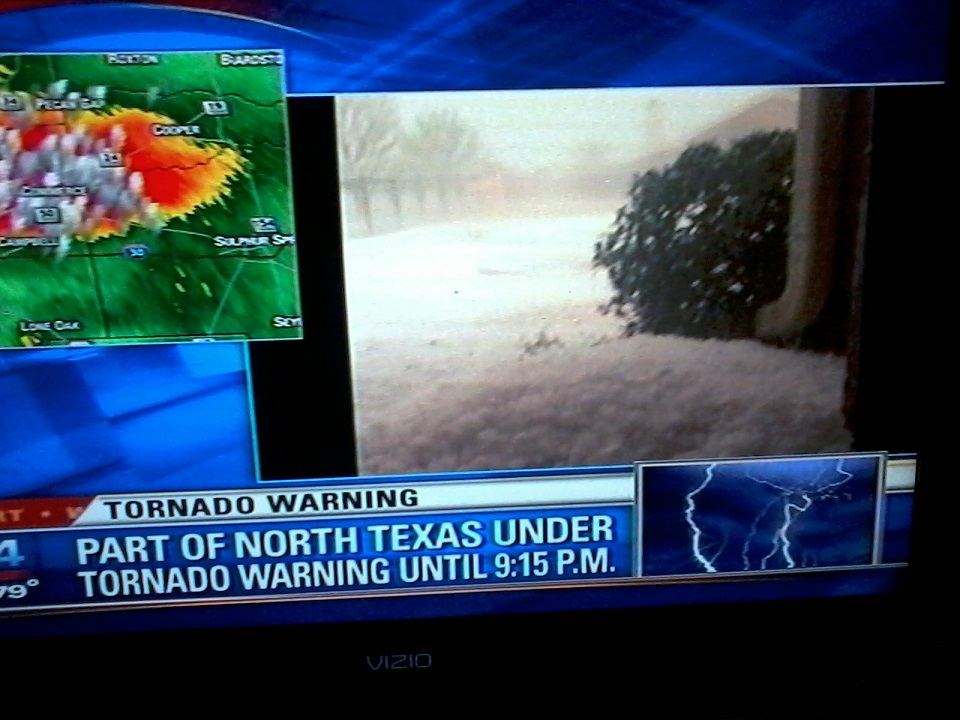 I used to live in Coral Gables (South Miami). Every year we had to expect the unexpected.

I didnt want to have the yearly stress of possibly losing everything I had or rebuilt. I loved it Florida though and love to visit the Keys and Clearwater....but live there?

Nope. Never again. There will always be tornados and hurricanes. God. They even have their own YEARLY SEASONS!!!

Its just no longer worth worrying every year. Not in tornado and hurricanes and flood states.

Be safe! No risky photography!!!

I do like to sit outside and watch the storm clouds, but if I do see a tornado coming for us, Im running in and ducking and cover. Also, im running inside if it starts hailing to. University of North Texas in Denton had slightly larger than baseball size hail falling around the campus and totaling cars and windows, more than once today. This is the 3rd batch of storms we're currently in from the past couple hours.

Yup, it's about time for hurricanes to. I'll give it a couple weeks until one starts developing off our coast.
edit on 3-4-2014 by buni11687 because: (no reason given)


Getting hit right now by me in St.Charles Mo. Taking cover for now bbl.


Getting hit right now by me in St.Charles Mo. Taking cover for now bbl.


Starting to get hit with hail at my house. Im guessing the power's going to be out soon. Stay safe.

posted on Apr, 3 2014 @ 08:08 PM
link
A little update from local news stations about the tornado that's currently in Farmersville (Collin County) - there's been a few injuries and wind speeds up to 150 mph


Tornados have gotten so bad over the last decade that folks don't worry about tornado season other than will it be a record season. Record size, record speed, record destruction.


Tornados have gotten so bad over the last decade that folks don't worry about tornado season other than will it be a record season. Record size, record speed, record destruction.


That's what Im hearing via local news already. "How many records will we break this time???"

Im guessing we'll have a few more records broken this year. Already had hail the size of apples earlier today. Give it a couple more months and we'll have even bigger

This comes from a bit East of Denton, from the local Fox news station.


I'm torn on this one...every year. I love watching and tracking storms (Can't do it like I used too though). And yet hate seeing the destruction they leave behind. But I have been fortunate in helping people in a time of need just by doing what I do as a hobby.

mysterioustranger
Why do we want to live in places because "its so pretty there"...when you could lose everything you have...possessions, family photos, property...EVERY YEAR??????

Name one place on earth where it is totally safe?

From either natural and man made disasters?

It's hitting us now.

I got the weather radio charged and on. The severe thunderstorm was just downgraded. But we are flash flooding like crazy.

I've got a long night ahead of me while the family sleeps.

Be safe everyone. I had my 15 minutes of tornado fame back in 05. Personally I hope it stays that way.

That's what's going on here now to. The storms and tornadoes have passed for the night, but we got a ton of rain for the area. I guess a few states got some of their first spring severe storms for this year today.

Well, I guess now it's time to wait a week or 2 until the next batch hits us.


That question seems to only pop up when it comes to tornadoes. No one questions the mudslides in Washington, earthquakes in Cali or "Superstorms" in NY, even though those places are far more dangerous to live....
Nice King Crimson references, btw.

posted on Apr, 4 2014 @ 06:28 AM
link
I guess one good thing about southern Mi we don't really get the natural disasters like other places. I'm sure there has been a tornado or two but the last one I remember was at least 25 years ago. Took out my friends house.

About 10 years ago the river rose, no biggy. I felt the tiny vibration of an earthquake,again about 25 years ago.

Can't remember any mudslides ever, no water shortages. There was a forest fire in the U.P. last year though.

Staying out of Detroit helps avoid the man-made disasters

posted on Apr, 6 2014 @ 10:57 AM
link
i'm in central texas. i have been saying that this spring is going to bring more severe storms than the last few years. more hail and more tornadoes. be prepared. the summer will have some flooding (bouts of very heavy rain) and then we'll hit a horrible dry spell that will really be bad for our already extreme drought. the last couple of years have been rather quiet as far as bad weather. we'll make up for it this year. (of course, i could be wrong but this is my "prediction" judging by wind patterns since february).