Largest Quake in 34 Years of 4.8 Rocks Yellowstone Amid Ground Uplift and Seismic Swarm

posted on Mar, 30 2014 @ 03:33 PM
link
This quake seriously put to the test many seismometers at Yellowstone, and some of them clipped, from the looks of it.

I have been watching carefully the seismic swarm happening near Norris, and had been noticing average magnitudes and the frequency of them increasing as of last night. I was about to email some contacts about it, but then thought... "nah, they know". So I went to bed.

I wake up to see this.

The University of Utah, a YVO member agency, sent out the following press release about a magnitude 4.8 earthquake that occurred this morning at 6:34 AM MDT.

The University of Utah Seismograph Stations reports that a light earthquake occurred at 06:34 AM on March 30, 2014 (MDT). The epicenter of the magnitude 4.8 shock was located 4 miles north-northeast of Norris Geyser Basin in Yellowstone National Park, Wyoming. This earthquake is part of a series of earthquakes that began in this area on Thursday, March 27. As of 8:15 am today, this series has included at least 25 earthquakes in addition to the main shock, with the largest of magnitude 3.1. The magnitude 4.8 main shock was reported felt in Yellowstone National Park and in the towns of West
Yellowstone and Gardiner, Montana.

This quake occurred during a period of ground uplift that is happening at the Norris GPS:

Now in the past, what has typically become evident much later, is that when swarms include these higher magnitude quakes, they are believed to have been generated from magma intrusion, rather than anything hydrothermal (water). Combined with the uplift in the area, this almost certainly is related, but we will wait to see what the experts say.

I've emailed a contact or two to see if I can get any additional comments.

Considering that this is the largest quake the park has seen in so long, I will be very curious to see if they rule it as tectonic, and not associated with volcanism. But seeing as it occurred in the middle of a long running swarm, and near the area of uplift, and at 6.8 km depth, I just can't see how that could be so.

The swarm is still ongoing, but hadn't seen anything that big or even close since the 4.8. Here is what that looked like at a couple of the stations, both in Spectro and waveform: 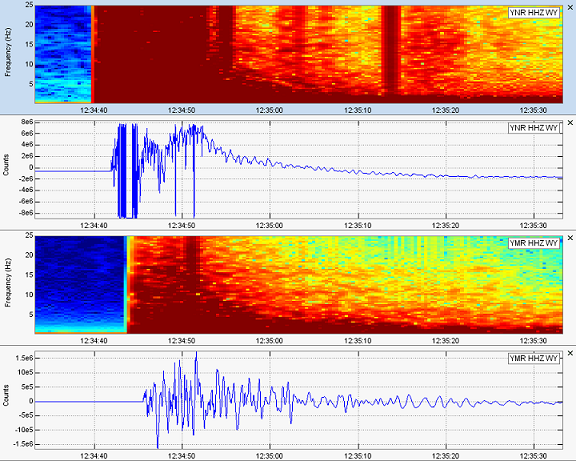 But with a quake that big hitting in the middle of a swarm and uplift, yeah, you can bet certain people are at work on this Sunday.

A USGS field team is in Yellowstone and will visit the area near the earthquake's epicenter today. The team will look for any surface changes that the earthquake may have caused, and for possible effects to the hydrothermal system at Norris Geyser Basin.

Based on the style and location of today's earthquake, at this time YVO sees no indication of additional geologic activity other than continuing seismicity.

Yep. Glad to see they are on it right away. Will probably be a bit before there is any additional info, as they analyze data. Temperature measurements and gas emissions will surely be high on the list.

In the meantime, the seismicity has quieted down a bit. A lot, actually. It's as if it was all leading up to that big quake, and then the rest is just tiny aftermath quakes. If it's magma, it's like it broke whatever was stopping it.
edit on Sun Mar 30th 2014 by TrueAmerican because: (no reason given)

I looked in the Fragile Earth forum, didn't see anything other than in the Quake Watch thread, so went ahead and posted. I didn't check the home page until just now. That's in the "Other Current Events" forum- not the usual place to look for these things, in Fragile Earth.
edit on Sun Mar 30th 2014 by TrueAmerican because: (no reason given)

posted on Mar, 30 2014 @ 03:40 PM
link
Starred and flagged. Yellowstone is a place that has always fascinated me. The problem is that the volcanic system there operates on an internal clock that's so long-term that we have no idea what's 'normal' there and what's not.


The biggest Yellowstone quake in forever, and you're asleep at the post! You'll never live this down!


Well hell, I watch it just about every waking moment I am not at work. I guess I'll just have to stay up and never sleep from now on. Ever.


Well, I would at least say you're dedicated, no one can deny that. But it seems to me you also need to quit your job, buy shares in coffee beans, and quite possibly manage to stay alive for a few million years as our lives are but a blink on Yellowstones timeline. I'll just quietly hope you don't get to see it blow it's top because I enjoy the sunshine down-under.

Died back down. Yay.