The digital unwrapping of the Egyptian priest Neswaiu

posted on Mar, 22 2014 @ 02:24 PM
link
Visitors of Stockholm's Medelhavsmuseet can now digitally unwrap the mummy of an Egyptian priest, Neswaiu. He lived in the third century BC at the temple of the god Montu in Thebes, now modern day Luxor. 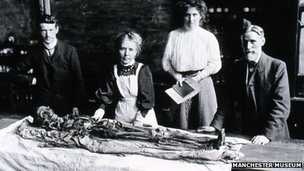 In 1908 in Manchester, some 500 people gathered in a lecture theatre to see prominent Egyptologist Margaret Murray supervise the unwrapping of a body from the Tomb of the Two Brothers from Manchester Museum's mummy collection.

As Egyptology and archaeology evolved, the destructive practise came to an end, but it didn't mean researchers and the public were any less curious about what lies within a mummy.

Using the table, visitors can virtually open the two coffins and then unpeel each layer of the mummy from his highly decorated cartonnage (the mummy's outer layer) down to his skeleton. They can also cut a cross-section through the multiple layers of the coffins and body. 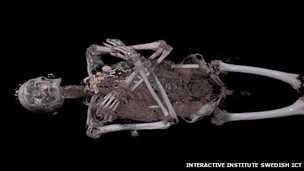 The results for one of their mummies, the Egyptian priest Neswaiu, are now on show in the form of a digital autopsy table in an "embalmment room" beside his real mummified remains and coffins. 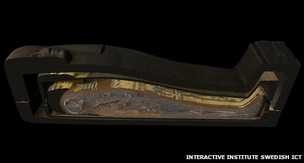 Neswaiu lived in the third century BC at the temple of the god Montu in Thebes - modern-day Luxor. His remains were gifted to the Medelhavsmuseet in 1928 when it first opened.

"We know that his mother's name was Takerheb and we also know that he belonged to the upper classes of Egyptian society because he could afford an expensive mummification. Not everybody could," said Sofia Häggman.

"He also has a gilded cartonnage, he has two coffins and he has a lot of amulets on his mummy, small pieces of jewellery that would aid him into eternal life."

Researchers have tried to see what was inside his mummy before. His stomach was opened in 1962 and a tissue sample removed and X-rays have also been taken previously. But the digital autopsy has added much more detail to their understanding.

"He was healthy, pretty muscular apparently. He lived until he was 50 or 60 years old which was comparatively old in ancient Egypt and he might have died from an infection in one of his teeth which affected the bone and could have caused blood poisoning," said Ms Häggman.

What Neswaiu doesn't have any more is a brain - that was not preserved. Humans, the Egyptians believed, thought with their hearts.

This is so awesome!! I want to unwrap a mummy! Stockholm has been added to the bucket list.


I often wonder why anyone feels they have the right to desecrate these graves. Is there a certain time frame that must pass before they can dig up your bones and have at it? What do they think they'll discover? It just doesn't seem right for some reason. Interesting? Eh!


They've discovered the Egyptians put more interest in to the heart than the brain. I am fascinated by history, these mummies were excavated in the early 1900's, not recently. As far a desecration...this is a virtual unwrapping of a mummy from the 3rd century BC.


They've discovered the Egyptians put more interest in to the heart than the brain. I am fascinated by history, these mummies were excavated in the early 1900's, not recently. As far a desecration...this is a virtual unwrapping of a mummy from the 3rd century BC.


I know what it is. What is the fascination in
unwrapping" them? Maybe this mummy was excavated in early 1900 but it's still done. I understand archaeology, but messing with the bones of the dead? For what purpose? And again, 2000 yrs ago makes it ok but 2 yrs ago no? To think these people went thru all that trouble to make a crypt for the millennia and they get dug up because someone is curious.