The Joy of the Pharaohs

page: 1
27
<<   2  3  4 >>
log in
join
share:
Skyfloating
+8 more
posted on Mar, 21 2014 @ 03:45 PM
link
In another thread someone told me that an Egyptian tour guide showed them a relief of a Pharaoh ejaculating, along with what looked like a sperm. So I looked up whether I could find a picture of that in the Internet and I did here. I also looked up whether sperm can be seen with the naked eye, and it cant. Apparently sperm would need to be a hundred times bigger to be seen with the eyes. So while I am glad to see the Pharaohs enjoying themselves, I`d be curious to find out how they knew what sperm looked like, supposedly without having microscope technology.

looks like hands up for donation time and it must have been an important donation if it was worthy of recording. There is a lot of evidence that the Egyptians knew about microscopic life, but glad to see this new evidence as it points to many other aspects of what might have been happening back in the day. Wonder how many descendants he had?

edit on 21-3-2014 by ancientthunder because: alignment


Is it just me, or does the area in question seem a brighter white than the rest of the area?

Very intriguing to think the Egyptians could see micro sized things. I wonder if they had glass back then?


Looks more like the Ankh symbol all bent out of shape than it does sperm...


But, that's not as fun as talking about Egyptian love juice, so never mind.

posted on Mar, 21 2014 @ 04:00 PM
link
Well it is obviously A Coincidence there is no possible way the Egyptians had the technology to create microscopes anymore than they had electricity!

As always it can't possibly be what it looks like even though it is the only time I have seen that symbol and near an (um hmm) ejaculating erect penis.

There is no way it is a sperm anymore than below is an Electric light bulb! Nope it is a Lotus with a snake flying out of it, not an electrical current that bites like a snake, surrounded not by a glass shell, but a fragrance that takes on the shape of a light bulb being held by a...ceramic insulator!
WAIT WHAT??? How is something you smell being held up by anything? That makes sense? LOL 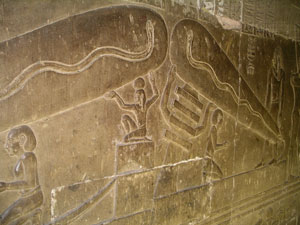 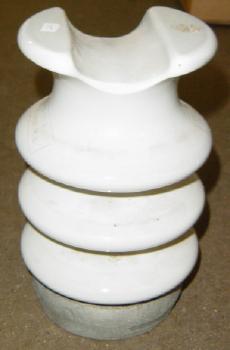 In any case, its interesting.


Curious to know if to the etching on the member in your photo looked all scratched like this one does?

posted on Mar, 21 2014 @ 04:13 PM
link
After thumbing through many more relief photos I've yet to see that symbol again. You would think that, if it were a symbol rather than an artists depiction of sperm, it would have to be repeated somewhere else on the walls of Luxor Temple.

We know with relative certainty that Egyptians didn't have microscope technology (that being said there are A LOT of things regarding ancient peoples that we are "certain" about that are being debunked on a regular basis), so where else in nature could they have possibly given an idea of what human sperm could look like? Tadpoles?


Is it just me, or does the area in question seem a brighter white than the rest of the area?

There seem to be several white patches on the whole relief.
edit on 2014 by Skyfloating because: (no reason given)

cosmikDebris
After thumbing through many more relief photos

I only found two on Google Images. Where are you finding these many photos?


The image looks like it's been altered. Compare it to this one here.

Unless you can find the same picture pre-alteration you can't really discredit the photos authenticity.


The image looks like it's been altered. Compare it to this one here.

What would be the motivation to add sperm? Maybe to add to the "Egyptians knew and could do about anything" crowd...

Ever think that the ankh is actually the depiction of a sperm? The male-centered version of the "Spirit of Life"?


It's the Pharoah offering to the God of fertility Min, plenty of examples of this see another one below. I think what is being taken for a spermatoza would be perhaps the upper hieroglyph from the word beneath, it certainly isn't seen in other examples of this iconography, could be a lotus bud, sometimes these also get mistaken for light bulbs. 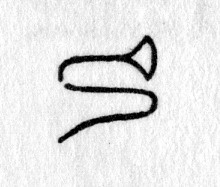 The Nimrud lens or Layard lens is a 3000-year old piece of rock crystal, which was unearthed by Austen Henry Layard at the Assyrian palace of Nimrud, in modern-day Iraq.[3][4] It may have been used as a magnifying glass, or as a burning-glass to start fires by concentrating sunlight, or it may have been a piece of decorative inlay.[3]

ohh, they may have had their ways of seeing things...especially the pharoah...like the vikings had sun stones

any how according to some sources i think that might be an incarnation of my buddy "our lord amen" with the two stone tablets of laws on his head
edit on Fripm3b20143America/Chicago19 by Danbones because: (no reason given)


ooops
en.wikipedia.org...
nice pic at link
edit on Fripm3b20143America/Chicago32 by Danbones because: (no reason given)