Materialism should be labeled a religious belief

posted on Mar, 20 2014 @ 01:36 PM
link
There's this back and forth between materialism and idealism but the fact is materialism has no basis in reality according to current scientific understanding.

Materialism is the belief that matter somehow randomly forms into the world that we see. Even when you look at the definition it's labeled as a philosophy.

the philosophical theory that regards matter and its motions as constituting the universe, and all phenomena, including those of mind, as due to material agencies.

There's no evidence that matter has an objective existence of the cup sitting on my table or a tree I see when I look out of my window. There's only 2 things that give these things existence, the mind and mathematics.

In fact, Quantum Mechanics tells us matter is like play dough. It exists as a wave of probabilities until the mind and mathematics give it form. Mathematics allows the Mind to understand and predict the nature of reality down to the smallest levels. Materialism will have believe that mathematics just describes the random interactions between matter. This isn't the case at all. The mathematics puts constraints on how matter can behave and this is why we have the laws of physics.

When someone drops a ball and it falls to the ground, it's not because any random interactions of matter. It's because the laws of Gravity tells matter how it will behave and the mind observes and understand this.

This isn't just to belittle the role of matter, but it's obvious that matter plays a secondary role to mathematics and the mind.

posted on Mar, 20 2014 @ 01:51 PM
link
As per materialism it also occurs to me that the ONE thing responsible for all societal achievement--including "science"--is that weightless, massless wonder we call "consciousness." The most astounding phenomenon we know is non-materialistic, eh? Go figure. Then there's paradox..."material" my butt.


Who are "materialists" worshiping? Who do they pray to? Which power to they believe is controlling everything?

If you can't name a superhuman controlling power, then its not a religion no matter how hard to try to bend the definition to fit your preconceived notion.

If no "gods" or higher consciousness/matrix exists, as the materialist suggests, then worship is worship, no?

posted on Mar, 20 2014 @ 02:43 PM
link
I would be inclined to call it a mild form of mental illness. After all, the extreme forms of materialism are hoarding, and that is classed as a mental illness, no?

preoccupation with or emphasis on material objects, comforts, and considerations, with a disinterest in or rejection of spiritual, intellectual, or cultural values.

Either definition, mine or yours, is a valid conclusion.

posted on Mar, 20 2014 @ 02:45 PM
link
The problem I have is that we (or at least I) do not have very good tools to intent->manifest things I want in the quantum reality (excluding limited Reiki).

The so called intention->manifestation seem to be very low leveled and to be able to achieve temporary synchronicity between two minds to achieve simple telepathic messages seems to be very hard and time consuming (especially with ego projection distortions).

So materialism is basic evolutionary psychology.
Nothing religious about it.

Side note - someone brought up extreme hoarding. That's different. That's a disorder.


re·li·gion
riˈlijən
noun
1. the belief in and worship of a superhuman controlling power, esp. a personal God or gods.

So no, not a religion.

posted on Mar, 20 2014 @ 03:01 PM
link
I posted on the inflation thread about ''anti knowledge'' (gossip / celeb culture /corporate and government lies / banking system /unsubstantiated religious beliefs etc) being parallel to knowledge, it is an interesting concept. 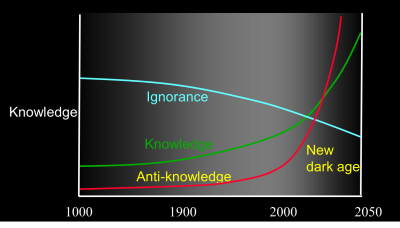 There's Buddhist that don't worship a super human controlling power. This goes for Taoist also. There's a reason why you didn't post the full definition of Religion.

: the belief in a god or in a group of gods

: an organized system of beliefs, ceremonies, and rules used to worship a god or a group of gods

: an interest, a belief, or an activity that is very important to a person or group

posted on Mar, 20 2014 @ 05:40 PM
link
There appears to be some confusion in the thread -- the OP is talking about the philosophy of materialism, not physical materialism ("hoarding") or consumerism.

In philosophy, the theory of materialism holds that all things are composed of material, and that all emergent phenomena (including consciousness) are the result of material properties and interactions. In other words, the theory claims that our reality consists entirely of physical matter that is the sole cause of every possible occurrence, including human thought, feeling, and action.

Contrasting philosophies include idealism and other forms of monism, dualism, and pluralism. (Source)


Much of modern atheistic thought is rooted in a ancient form of materialism, Epicureanism (which, to avoid further confusion, has nothing to do with food, lol.)


I agree with you about matter. It hasn't been properly defined. The same goes for physicalism.

There's only 2 things that give these things existence, the mind and mathematics.

You have left the evidence, friend, and have merely postulated your own beliefs where others have stood. This is no different than than what you are writing against, and I fear we have entered the realm of double-standards and even superstition.

The most astounding phenomenon we know is non-materialistic, eh? Go figure.

Stupidity is another astounding phenomena that is "non-materialistic", but it is nonetheless performed by physical things. Go figure.

Outstanding job of arguing my point and demonstrating yours.


So should many other things... man made global warming, the Theory of Evolution, Liberalism, and many, many others.

Outstanding job of arguing my point and demonstrating yours.


How much does consciousness weigh again? What "material" does it consist of? Ghost in the machine. Of course material things exist too, so your argument isn't very coherent. Try to type a message on your computer (that was created by consciousness, btw) without your non-material consciousness.

That's quite the magical powers you have there. At least you don't have to take responsibility for yourself. Let your consciousness do the work and the heavy lifting.


Did you even think about that before you wrote it? I'd say consciousness has everything do to with taking responsibility for one's self. It's still non-material though.

How much does consciousness weigh again? What "material" does it consist of? Ghost in the machine. Of course material things exist too, so your argument isn't very coherent. Try to type a message on your computer (that was created by consciousness, btw) without your non-material consciousness.

Words
...your ghost in the machine analogy is the weakest analogy I may have ever come across. Name one ghost in any single machine that has ever existed, and it might make sense.


You'll have to take up the "weakness" of that with neurophysiologist and Nobel Prize winner Sir John Eccles who described the brain as "…a machine that a ghost can operate."

Quantum Physics seems to finally be shedding some light on what "science" once knew. What I mean by that is that Philosophy is the father of the scientific method. When the materialists pulled so blindly away from philosophy, we lost the greatness of the "Alchemists." The alchemist (no, I don't refer to the turning lead into gold-type per se) being more rounded (science, philosophy) and now being re-birthed--hopefully--by quantum discoveries.

Sir John Carew Eccles, AC FRS[4] FRACP FRSNZ FAAS (27 January 1903 – 2 May 1997) was an Australian neurophysiologist who won the 1963 Nobel Prize in Physiology or Medicine for his work on the synapse…Eccles was key to a number of important developments in neuroscience.
en.wikipedia.org...(neurophysiologist)

A couple more quotes by Sir John as relates to this OP:

The materialist critics argue that insuperable difficulties are encountered by the hypothesis that immaterial mental events can act in any way on material structures such as neurons. Such a presumed action is alleged to be incompatible with the conservation laws of physics, in particular of the first law of thermodynamics. This objection would certainly be sustained by nineteenth century physicists, and by neuroscientists and philosophers who are still ideologically in the physics of the nineteenth century, not recognizing the revolution wrought by quantum physicists in the twentieth century.

― John C. Eccles, The Wonder of Being Human: Our Brain and Our Mind

There is no, "Theory of the Mind" as of yet, and one might say that it's the materialists--who by their "handicap"--have limited themselves to ever having one.