"Pulse Flow event" planned for 23 March, 2014 on the lowest stretch of the Colorado River

posted on Mar, 17 2014 @ 08:34 AM
link
In an attempt to resurrect the ecosystem of the Colorado River delta, an international agreement has been reached to allow a significant dam discharge to flood the lowest reaches of the river channel, mimicking the long-vanished annual surge of spring snow melt.


The Colorado Delta was once one of the planet’s great desert aquatic ecosystems, boasting 2 million acres of lush wetland habitat. For millions of years, it received a huge spring flood as the winter snows melted in the Rocky Mountains and the resulting flows coursed south. The flood waters spread across the delta before emptying into the upper Gulf of California.

That yearly flood cleansed the river channel and floodplain, recharged groundwater, aided the reproduction of native cottonwoods and willows, and sustained the overall delta ecosystem and its extraordinary bird and wildlife habitat. It also connected the Colorado River to the sea, where fisheries depend on the mixing of saltwater with fresh water for their spawning and rearing grounds.

I'm happy to learn of this. Dams do provide needed electricity, but this area has other, less environmentally harmful options, such as geothermal. It's nice to know a small effort is being made to mitigate the destruction the series of dams on the Colorado have caused over the decades.

I do wonder if this increase in water volume will influence the southern Imperial fault zone/Gulf of California rift zone, near Mexicali? Could this flooding trigger a large quake?

It has been shown that flooding can "lubricate" faults, and that flood control may be partially responsible for the "lull" in big quakes along the southern San Andreas. Link

Additional source ABC
edit on 3/17/2014 by Olivine because: (no reason given)

My first questions is, is the damage already done?

If the dam has been there for some time, then I can see a situation where animal/plant life that this flooding would normally help, having already sustained to much harm to easily "spring back" from the lack of extra water.

About the earthquake potential. This is an interesting, yet obvious point. I would think the surge of water would be akin to hitting the area with a giant mallet. All of the extra weight surging back onto the plates. I'm no geology professor, so I cant really say. I hope this thread stays updated so I can see what happens. :-)


Good to hear this is happening. Loooooong overdue but it is a start.


I'm sorry this seems like a eco response to allow the corporate farms access to water despite the drought.

posted on Mar, 17 2014 @ 09:38 AM
link
And this will kill billions of insects, plants, and other lifeforms which have established homes along the river. If god wanted dams she would have built more beavers. On the other hand, having been given one of those multi-faceted human minds, I will look forward to watching the video of the release.

Olivine
I do wonder if this increase in water volume will influence the southern Imperial fault zone/Gulf of California rift zone, near Mexicali? Could this flooding trigger a large quake?

It has been shown that flooding can "lubricate" faults, and that flood control may be partially responsible for the "lull" in big quakes along the southern San Andreas. Link

Additional source ABC
edit on 3/17/2014 by Olivine because: (no reason given)

Hum... you know, I wonder if that's one of the reasons the 1906 San Francisco earthquake happened?

See, back in 1905, the Salton Sea was accidentally created. It's one of the things I use to reinforce that mankind can drastically alter the earth, and it occurs to me that such a large volume of water flow could have contributed to increased stress on the nearby San Andreas Fault. Granted, San Francisco is a good ways from the Salton Sea, but still...

andr3w68
My first questions is, is the damage already done?

If the dam has been there for some time, then I can see a situation where animal/plant life that this flooding would normally help, having already sustained to much harm to easily "spring back" from the lack of extra water.


Well, it is an experiment, and no one knows for certain if the delta ecosystems will bounce back, but there is reason for optimism:


I'm sorry this seems like a eco response to allow the corporate farms access to water despite the drought.


I think you may be confused about what is happening. This event will flush the watershed in an attempt to improve the environment. Corporate farms aren't getting a drop, unless they illegally siphon water off.

The flood is one consequence of a five-year agreement signed in 2012 as part of the U.S.-Mexico Water Treaty. This section of the treaty, known as Minute 319, mostly deals with issues such as how the countries will share and store water, but it also permitted an experiment to send a pulse of 34 billion gallons (130 billion liters) of water coursing down the Mexican extent of the Colorado River, a stretch drained dry by overuse upstream in the United States.

This agreement paves the way for collaborative management of the Colorado River between Mexico and the 7 U.S. states that draw water from it. They will share surpluses, jointly conserve in times of drought, and encourages storage.

Water was released from Lake Mead a few days ago, and today (I still haven't found an exact time) the Morales Dam will be opened to allow the water to flood the river channel.

The pulse will start slowly Sunday, when officials lift the gates at the Morelos Dam, west of Yuma, Ariz., releasing about 700 cubic feet of water per second. It will peak Thursday when about 4,200 cubic feet per second will rush through the dam. Over eight weeks, an estimated 105,000 acre-feet will be released.

If all of the water is not pulled down into the soil, it's possible (but not likely) that the Colorado River could reach the Gulf of California in about 2 weeks.

This what the mighty river looks like beyond the Morales Dam prior to the pulse event--just a trickle. 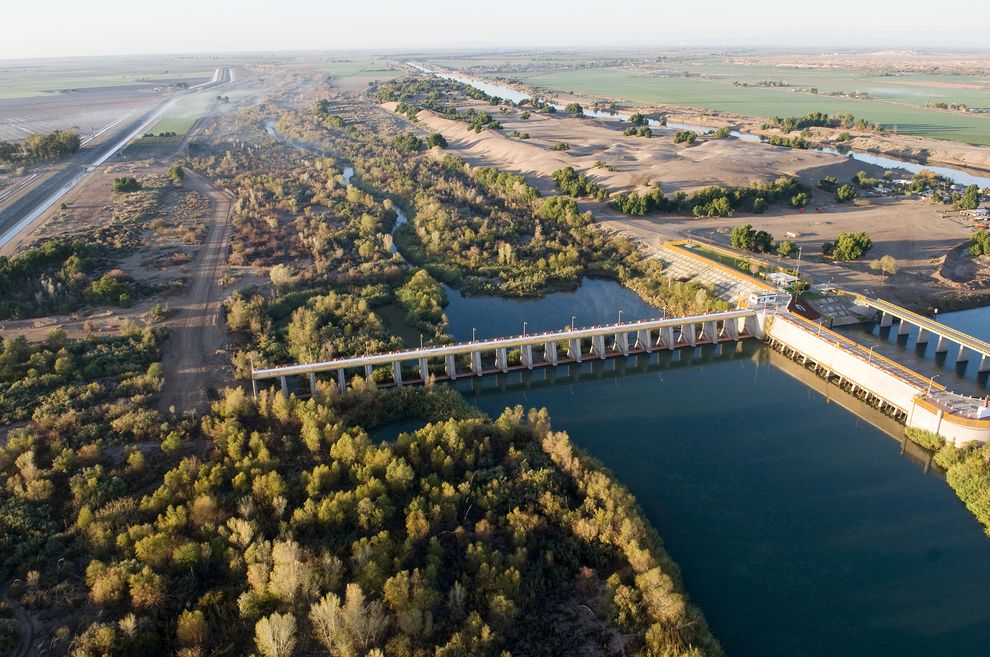 posted on Mar, 23 2014 @ 08:51 AM
link
We've had similar 'experimental environmental releases' here in Oz and they always have a beneficial effect on river life and become mandatory forever thereafter. The way the generation facilities can negate the loss of storage for main existing generation plant is to install a mini-hydro machine that runs off the environmental release. The typical agreement works out to be maintaining a specific minimum flow or level at a nominated downstream monitoring site

So the 700 cusec flow quoted is approx 20 cumecs which is a piddling flow in hydro terms IE barely enough for an average main turbine to 'break away' from standstill. The larger 'pulse' figure equates to approx 120 cumecs which is around what you'd expect at load on a single medium size hydro machine to get some perspective on the volumes involved from the generators' point of view. 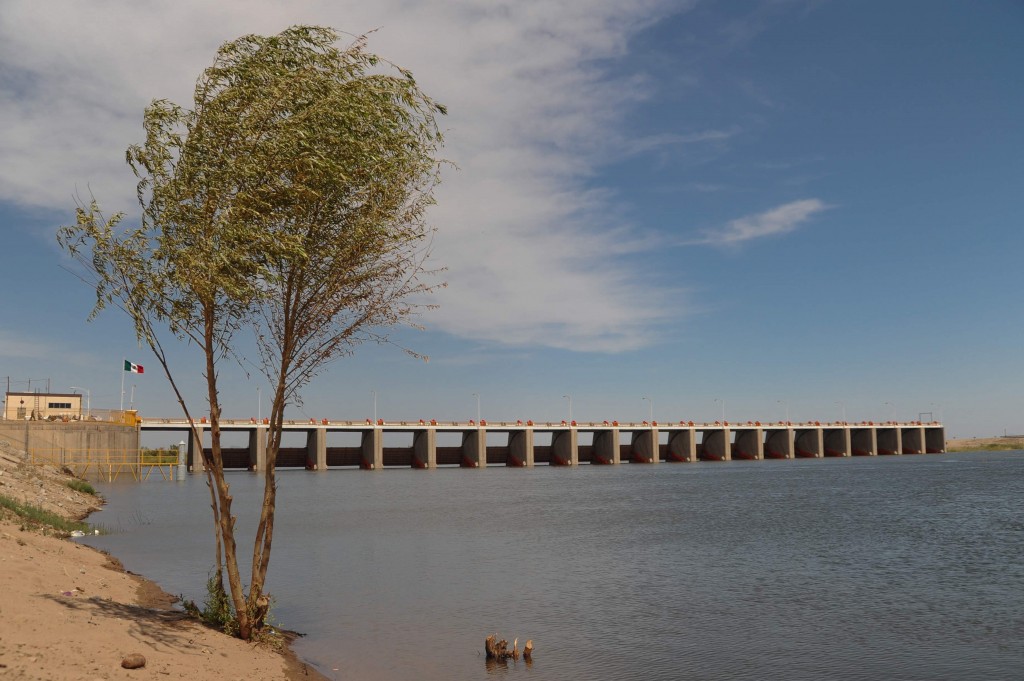 This is the Colorado River below the Morelos Dam near the peak of the pulse flow (taken on Thursday, 27 March, 2014)
Photo from Nat Geo

More from the Los Angeles Times on the 27th:


Osvel Hinojosa knew that an infusion of water would bring the Colorado River delta back to life. But in just a few days, a U.S.-Mexican experiment to revive the delta environment has exceeded his expectations.
The water is running deeper, faster and wider than anticipated in a channel that was once bone-dry. Hinojosa has spotted hawks, egrets and ospreys flying above the newly flowing water. He's even seen beavers.


I hope we find a way to keep some of this water running toward the Gulf of California in perpetuity.

But i also noticed after they did this , the county started Installing water Meters to control Water restrictions

posted on Sep, 17 2014 @ 08:59 AM
link
The Sonora Institute put together this video narrated by Robert Redford, documenting the initial impact of the March pulse flow event. It was published in late July.
The reaction of the locals was really joyful. Enjoy.