With a voter turnout (79.09%) that exceeded every US Presidential election since 1900, the people of Crimea have spoken:

Ukraine's leaders have called up 20,000 men for a newly-created National Guard as despite the so-called "truce" Russian APCs and Tanks are rolling. Pro-Russian supporters are burning books in Donetsk after storming anti-Russian buildings. The White House is already out rejecting the vote (before the final results are released). 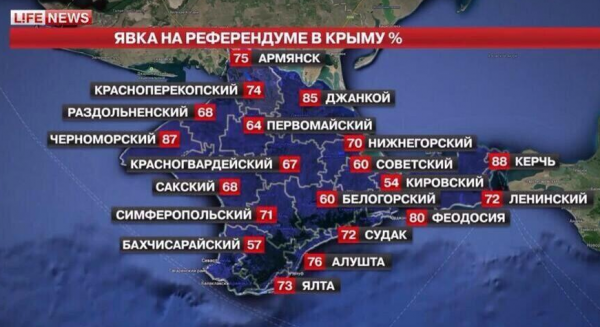 Obama and Kerry, your move.

It should remain such until directly asked in the UN by one of those parties.


It's not Obama and Kerry's move...it's their financial backers.
Great excuse for another arms build up ala Reagan first term. His congress was democratic so blame falls equally. First trillion dollar budget I recall. Then, the hammers and toilet seats. The Pentagon has been unchecked ever since. War is a business. Perpetual war is perpetual business. War is peace.

posted on Mar, 16 2014 @ 02:27 PM
link
I bet the politically oblivious couple Obama/Kerry are utterly flabbergasted that the people would overwhelmingly vote Pro-Russia. But to anyone knowing Putins Machiavellian moves, its no surprise at all. He knew beforehand that Crimea is pro-Russia and yearning to return.


I just hope none of the bush family had had anything to do with the voting system!

I suppose the next thing we'll hear from the US administration is "Voter fraud!"

All those dead people and illegal aliens voting against US interests.

What a waste of money!

benrl
This is an internal matter between the People of the Ukraine, Crimea and Russia.


If truly 'internal' it wouldn't include 'Russia...

posted on Mar, 16 2014 @ 02:34 PM
link
But I hear Obama has an idea - the next presidential election will be carried out with foreign militia on the streets, and all media that doesn't support him banned. And the choice will be a) Obama b) Satan. He'll win a new term no problem. And Putin showed him how Way to go!


benrl
This is an internal matter between the People of the Ukraine, Crimea and Russia.


If truly 'internal' it wouldn't include 'Russia...


It is a problem between a set group of parties, any party outside that would be external was my inference.


That North Korean leader Kim Jong Un won his first parliamentary election with a clear 100% of the vote might not be remarkable, but who he chose to cast his vote with certainly has sparked interest amongst Korea-watchers.

posted on Mar, 16 2014 @ 02:39 PM
link
Well, I guess that's that as they say. It's all over but for the idiots in suits at press conferences to make a logical outcome into a mess to scorch the rest of the Ukraine. Heck, these folks are a 5 or so hour drive from the outlaying suburbs of Moscow. It's a shock they chose this way? The Crimea is where the Communist Elite partied and vacationed....and retired.

Now lets see if Putin wants to make it a good and proper international crisis by moving outside what cultural realities may cover with happening. Ukraine as a whole may as well be Europe for a good part of it, I'd think. Even his popularity has limits..lol.

Hopefully Kerry and Obama take defeat well. We haven't seen them outright stomped on a big foreign policy demand before. There's always been "but..but..but.." room. Not much this time with the demands in the air and the Monday suggestion, however it got going, for deadlines and such.


Russia invited to an election deciding whether or not to leave their mother country and join Russia....


With those numbers, I hope the West including Harper tones down its rhetoric. Ukraine needs to regroup and rethink their policies and moves, imo. I would like to see everyone else just keep low and let Ukraine recover.

posted on Mar, 16 2014 @ 02:40 PM
link
I just can't help but think Crimea is voting to move back in with Mom and Dad cos it's a tough world out there and they're close to living on the streets, The interpretation is all mine and could very well be bass ackwards

benrl
This is an internal matter between the People of the Ukraine, Crimea and Russia.

It should remain such until directly asked in the UN by one of those parties.


Ukraine have already asked for our help and there have been emergency UN meetings.
They gave up nukes because we promised to protect them from exactly this kind of thing.
Russia signed the agreement saying they wouldnt do exactly what they are doing now, so they broke their promise, and we said that if they did what they are doing now, we would protect Ukraine, and we are not.

Both sides have gone back on their word and broken the agreement.


Russia invited to an election deciding whether or not to leave their mother country and join Russia....


As opposed to the neo-nazis that established themselves in kiev? Yup.


Yeah, I'm not surprised you'd support a Russian Puppet instead eh?
Wait, wasn't this thread about people deciding for themselves...?