posted on Mar, 15 2014 @ 09:56 AM
link
There’s a lot of bogus and misleading information floating around about MAS 370. Here are some clarifications to some of the crazy media statements. Just some facts for clarification (from someone who works in the business…)

1. Transponders CAN be turned off from the flight deck. There probably is a credible need to have a discussion about whether this should be possible, but the facts are they can be turned off.

2. ACARS (the in-flight telemetry system) CANNOT be turned off from the flight deck. Turing ACARS off is quite difficult actually and involves precise knowledge of the electronics (including location) on-board an aircraft (Boeing 777-200 in this case).

3. A transponder disappearing off of a regional ATC (Air Traffic Control) “Center” is a big deal, and generally causes a flurry of communication. It is not simply ignored as if nothing happened. When a commercial airliner has filed a flight plan from point A to point B (especially an International flight which will cross multiple countries), this flight plan is distributed to all of the regional ATC facilities which will handle the flight along its route. This includes “Ground”, “Tower” “Departure Control”, (regional) “Center(s)”, “Approach Control”, “Tower” and “Ground” (on the far end). If a transponder disappears from any one of those control elements before it is schedule to it causes a flurry of radio calls to the aircraft and telephone calls between the respective control facilities. Again, it is NOT just simply ignored as some irrelevant piece of information; people know about it, and those people DO something about it. They don’t just sit back in their chair and say “Hmmmm….oh well!” and move on to something else.

5. A commercial airliner cannot descend “40,000 feet” in one minute (60 seconds). It just CANNOT do this. Any report that says this happened is simply wrong. A descent rate of 40,000fpm could not even be accomplished with a nose down powered dive. And, if anyone ever attempted such an act the airframe would structurally fail and break apart well before this descent rate was ever approached. Simply put; it didn’t happen. The data, or the source, is wrong. Period. (Note: high performance military aircraft might be able to accomplish such a feat, but commercial airliners cannot.)

6. A commercial airliner, like a Boeing 777-200 (which MAS 370 was), reflects a significant primary radar signature. A “primary” radar signature is different from ‘secondary’ radar which monitors the transponders (noted above). An aircraft the size of a 777 at cruising altitude can be “seen” by primary radar from hundreds of miles away. A un-announced radar contact the size of a triple 7 would be a big deal to just about anyone, especially one which was about to overfly your territory.

posted on Mar, 15 2014 @ 10:15 AM
link
Can't this be said on one of the already existing threads? How many threads does this situation require? Surly not one per idea or theory.

posted on Mar, 15 2014 @ 10:15 AM
link
7. The chances of a non ‘type-rated’ pilot successfully landing a Boeing 777 at an unfamiliar airfield is next to zero. A commercial ATP rated pilot type rated in large twin-jet operations (but not a 777) might be able to land a 777, but it would likely be a pretty hard landing if even successful. A non-pilot could not land a 777 successfully. Period.

8. MAS 370 was fueled for a 2,500 nautical mile (nm) flight. Do not confuse this with what her absolute maximum range would have been. Commercial airliners are required to be fueled with considerable fuel ‘reserves’. While not legal to intentionally use these reserves under non-emergency situations, these reserves would extend the range of MAS 370 to nearly double the scheduled range (or roughly 4,500nm).

9. Large movements of flight controls on the flight deck will usually disengage the Auto-Pilot function on an aircraft. Returning an aircraft to straight and level flight on Auto-Pilot requires a detailed understanding of how the flight controls on the aircraft work. Maintaining straight and level flight (at night) with an inexperienced / untrained pilot without Auto-Pilot would be difficult if not impossible.

I will continue, but I don't think it will be long before it becomes overwhelmingly evident that we, the World, are not getting the straight / whole story about what happened to MAS 370...from anyone!

There are a lot that share what you do but please continue with your understanding of things . I have already gained some facts to only confirm what I suspected but the more facts we have about the blatant conflicting facts are much welcomed .....peace

posted on Mar, 15 2014 @ 10:46 AM
link
Based on the seriousness of how this is taken, one has to expect that air forces would be scrambled to investigate at once, yes? If they subsequently cannot find it, then what does that say about the coordination and transmission of information? There has to be a serious weakness there in my mind anyway.

posted on Mar, 15 2014 @ 10:52 AM
link
From all the info I have seen on ATS,MSM is this :They are not telling us anything! Yes I believe it was a hijacking, biut there has to be a lot more to the picture then we will ever see.
Just like a UFO case.

posted on Mar, 15 2014 @ 10:53 AM
link
10. An aircraft might be able to ‘buzz’ around relatively anonymously in the South China Sea by Malaysia or Thailand, but one that gets well out over the Indian Ocean is going to be carefully monitored by numerous countries. Not the least of these countries is India and the US/Britain (from Diego Garcia). Diego Garcia houses some of the most powerful radars on Earth (and for good reason too). In fact, an unannounced aircraft which gets within 5,000 nautical miles of Diego Garcia is going to have alarms going off in Washington DC and London.

11. It is true that cellular phones do not work well, if at all, far out over an ocean. However, if MAS 370 passed back over the Malay peninsula like is now being suggested, those same cellular phones would have immediately re-established contact once back within range. To speculate that every single cell phone could have been successfully confiscated (from persons, luggage, etc) is unrealistic. These cellular phones would have provided a wealth of information, even if no one was using them to call.

Flyingclaydisk
...To speculate that every single cell phone could have been successfully confiscated (from persons, luggage, etc) is unrealistic....

This could actually happen. "Everyone! You have 5 minutes to produce a cell phone, if you do not, you will be shot in the head immediately!"

The hijackers have a small laptop spoof cell-tower that a phone will try to connect to if it is still active. This lets them know if any were on in the cargo hold or if any passengers held on to one.

posted on Mar, 15 2014 @ 01:22 PM
link
12. Dramatic heading and altitude changes like those being described suggests there was likely some kind of an altercation or disturbance on the flight deck. That the flight did seem, from the latest reports, to stabilize and resume somewhat of a chaotic, but coherent, flight path suggesting someone was actively in control of the aircraft afterward.

13. If MAS 370 was still intact enough to fly, decompression of the aircraft (rapid or otherwise) would not have disabled the emergency oxygen systems on board. Consequently, some passengers, if not all, would have likely survived such an event.

14. That MAS 370 climbed above FL450 (45,000 feet) would suggest the aircraft was not under direct control of a licensed / qualified pilot at the time this took place. The service ceiling of the Boeing 777-200 is 43,100 feet. ~45,000+/- feet would be above the Service Ceiling certified for the aircraft. At this altitude pressurization inside the fuselage would begin to diminish over time, but there likely wouldn’t be any significant damage to the pressurization system nor the pressure hull of the fuselage at this altitude. The most likely effect would be the pressure equivalent inside the cabin would change from roughly 8,000ft to 10,000ft. Some occupants might get dizzy, but only very elderly or infirm people would lose consciousness

posted on Mar, 15 2014 @ 01:28 PM
link
Since this thread is about clarifications, would someone explain to me where I missed the boat on state secrets in that I thought cloaking was one of them. I need the blanks filled in between that and how a Texas company dealing in cloaking has plants in Malaysia and China? If Western technology is so easily accessible to those overseas, why the need for anyone to steal the plane?

posted on Mar, 15 2014 @ 01:43 PM
link
15. A decompression event (rapid or otherwise) which rendered the crew and passengers unconscious would run contrary to any explanation of later course and altitude changes.

I’m going to insert a couple opinions here so I won’t attach an item number to them because they are speculation on my part….

A suicidal pilot would not fly for hours until the aircraft ran out of fuel to commit the deed. Once he/she had made up their mind, they would fly the aircraft into the water or the ground.

No pilot in command of his faculties would intentionally head west southwest from Malaysia out over the Indian Ocean. (see item above) It would be a certain death-wish. 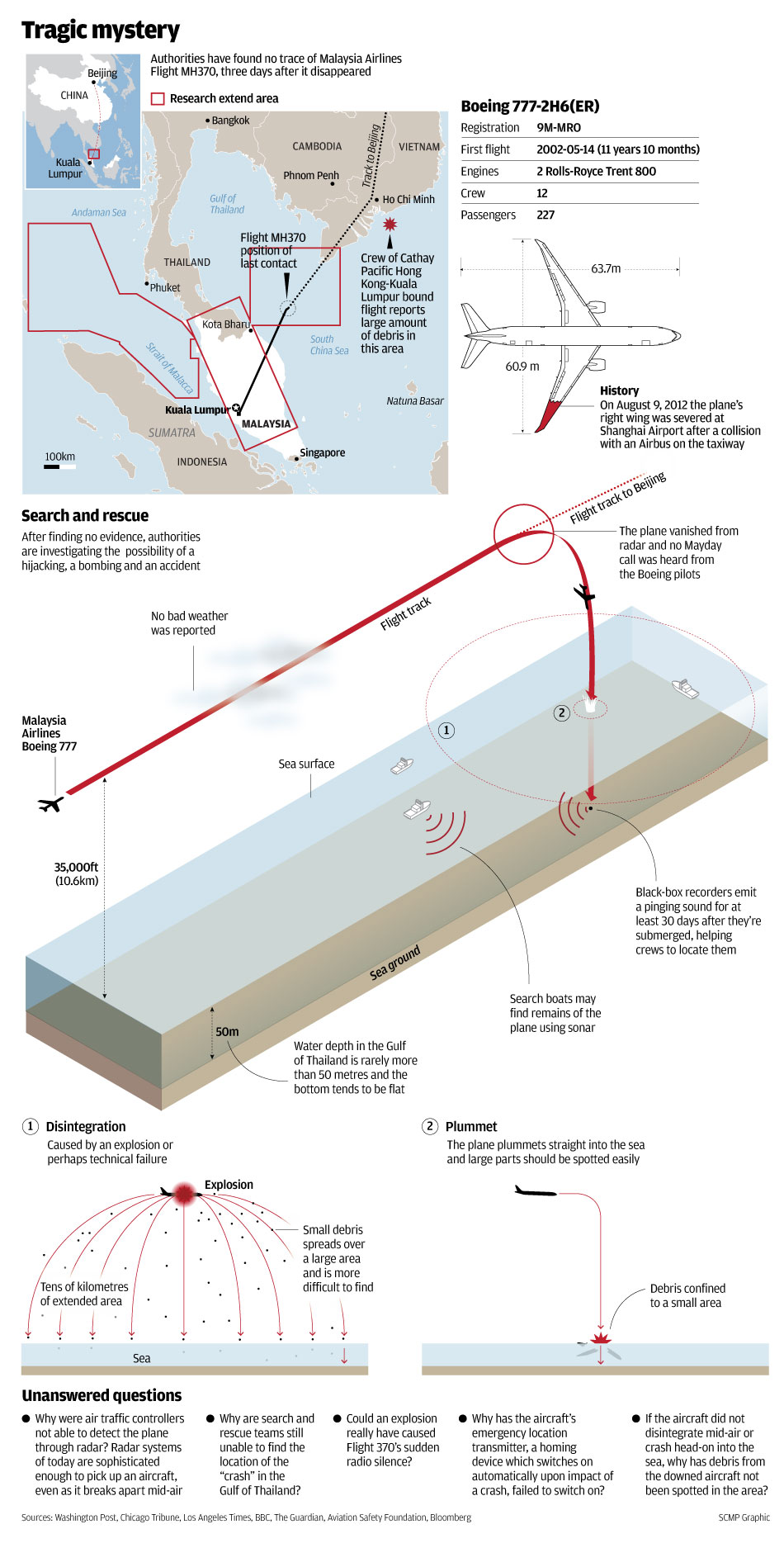 Ok, that it, I have nothing nice to say. Need to get away from this.

Thanks for the add!


Thanks
I like the first infographics - It got -2000 for elevation, what purpose ? I dont know

Pics auto deleted, probably due to bandwidth spike. What can I say.


A very detailed and in-depth well thought out debate with excellent graphics. I applaud you.
A lot of my questions answered


Nice to have someone who knows what they're talking about!!!

posted on Mar, 15 2014 @ 04:36 PM
link
Just to add, there are 2 new search locations, they are
From North Thailand Sea up to Kazakhstan for North corridor
North of Indonesia to Hindi Sea for South corridor

ACARS are confirmed been shut off before the plane change route.