Has anyone else noticed - thinking for yourself is being disregarded for what's popular.

posted on Mar, 15 2014 @ 10:31 AM
link
i read the topic and just thought about mobs w/ pitchforks
only now they'll probably all have ipads too


Yes, absolutely. MANY times. One big example for me is when people express certain interests or opinions, and then when I try to have a normal everyday conversation with them by asking them what they enjoy about so-and-so or why they believe in such-and-such, they tell me they don't know, they're not sure, etc etc... So when I try to question further, they get angry and refuse to talk about it. Now, I have to point out that during this process, I'm not being condescending in the least. Here's an example of conversations I've actually had:

Me: Oh, I see you're interested in Christianity; would you like to talk about it?
Them: Um, sure
Me: So do you consider yourself a Christian?
Them: Yeah
Me: Ok, well what are your core beliefs?
Them: I don't know
Me: Well could you think about it and tell me?
Them: Um no, I don't have to explain myself

That could of course be explained by psychology. The person could be afraid of offering an opinion or a belief which is in contradiction to another person's, and by refusing to discuss it they are thereby avoiding potential conflict. Or, perhaps they claimed to be a Christian in order to achieve a sense of belonging they enjoy from their family and friends, but aside from that are not really invested in the religion. Or maybe they're just that unintelligent that they think claiming to belong to a religion is the height of involvement in it... A scary thought.

But my experiences with this topic get worse.

I'm starting to become convinced in those holographic universe/matrix/virtual reality theories and that some people aren't controlled by conscious minds, but rather computer programs that aren't written properly.
One conversation I had with my mother went like this:
Us: blah blah 9/11 blah blah
Me: Did you know the government had a plan called Operation Northwoods to carry out attacks against the US itself, including hijacking planes, in order to blame the events on terrorists?
Her: That's not true, people on the internet made that up.
Me: ...No, look, you can read all about it right here. It's public knowledge.
Her: (After looking at it) No, that's not true, the government wouldn't do that. People made that up on the internet.

It was like her mind just turned off and was running on some autopilot program. It's scary.

posted on Mar, 15 2014 @ 11:16 AM
link
Yes, I've noticed it too, and I don't even talk to many people.
I have actually had a "friend" recently ask me for advice and then proceed to discount my years of hands on experience in the matter, because that wasn't what she read on Facebook. I have ceased to even exist to many people because I refuse to jump on the bandwagon. It's horrible, things just aren't true if they aren't on Facebook.

I'm giving up. I won't sell myself out just to keep friendships that obviously aren't.
Thanks for bringing attention to this. I have never heard the Jank reference, but again, I don't talk to many people.
ATS is fast becoming the most interaction I have with people outside of my home.

posted on Mar, 15 2014 @ 03:51 PM
link
The collective egoic mind is totalitarian.
Excuse me for being a jank yank and saying I don't think people have thought for themselves since the conditioned egoic mind took over humanity and people now mistake their opinion for themselves and defend it as though being wrong is death.

I've failed at repeating what I think is BS ever since I was born so you can guess I never managed to land a big diploma.

Not for myself at least. Or for any of us who can walk in the meta and think at the same time. I'm concerned for the herd, the go-along-to-get-along type people. Do we owe them anything. Should we spare some mercy for them. Have they ever been anything more than an impedance to success? 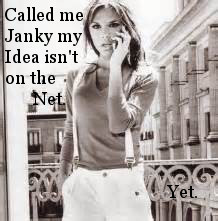 Perhaps this is why Authority has passed laws making it a crime to tell someone to kill themselves. (over the net mind you, not in person.) Because people in custody of their own meta understanding, could constitute an extinction level threat to the masses of gullible Corporate drones and followers. I'm concerned about them, not how they treat me.

Do we owe people who have mortgaged truth for the iPhone a goddamn thing? They have consumed resources yet have failed to evolve to their full potential. Worse, we find them being used more and more as ideological storm troopers to force compliance.

If ever there was a group of people that screamed out to be protected from themselves, it's those who have stopped thinking and started letting the iPhones do the thinking for them.

This is all thought-provoking indeed. But what's the root cause> Do I really blame or thank those who bring us into the world and raise us? Maybe. They are who pretty much really get us started and decide whether we stand a chance or not. Don't hand your kid the answer...make the kid figure it out...without a computer. There are tools. And then there are tools.
edit on 3/15/2014 by ~Lucidity because: (no reason given)

posted on Mar, 15 2014 @ 04:47 PM
link
This is why diversity is all about looking different, not about thinking different.

No one really wants to hear from the person who has that different opinion on anything these days. It makes them uncomfortable; everyone really likes group think. And when the group can't come up with the answer ... that can be a very bad thing.

posted on Mar, 15 2014 @ 05:02 PM
link
Thinking for oneself will make one unpopular.
Humans feel separate and isolated and feel the need to fit in.
That is why it is said that one must not look to the world for peace and love.

“I have told you these things, so that in me you may have peace. In this world you will have trouble. But take heart! I have overcome the world.” John 16:33

posted on Mar, 15 2014 @ 05:17 PM
link
What the OP is describing is the "Lower Primate Committee Thinking Experiment". I swear it was a real experiment I read of years ago, but google is only turning PETA type animal testing pages.

So from memory, a bunch of monkeys in a large room. In the middle of that room is a staircase, and hanging at the top of the staircase is a ripe bunch of bananas. Whenever one monkey goes for the bananas, the researchers spray all the monkeyswith cold water.

Eventually, the monkeys collectively attack any single monkey that tries to get the bananas.

Next, they swap out a couple of monkeys, put in new ones. New monkeys go for bananas, get attacked, and learn the rules. They keep swapping out monkeys until there are none of the original monkeys left who have experienced the cold water, yet still no monkeys take the bananas. The researchers could all be home for the night, on vacation, or moved on to other experiments, and it could be perfectly safe go get those bananas, but the society never allows it.

You have to wonder if that's what the Jewish no pork thing is all about.
edit on 15-3-2014 by The Cusp because: fat fingers


When you brought that up about the internet searches only turning certain things up is another problem of relying on the internet for all the answers.

Google, Bing, Yahoo!, etc. could all push an agenda they want by simply removing all information they deem to be a threat to their agenda.

It's always been this way though. On the news this morning they showed how the attention span of Americans have decreased from 12 seconds a decade ago to 8 seconds in today's world.

The theory that we are being dumbed down isn't so much a theory as it is a fact anymore. It's all one giant psy-op.

The Cusp
So from memory, a bunch of monkeys in a large room.


Yip the conditioned collective egoic mind.
If you are free from your past conditioning ( and do not fear the"future") are just Now you can still use memory but not get stuck in the monkey room.

posted on Mar, 15 2014 @ 05:59 PM
link
Best way to get at information is everywhere. Both in the field and in the library and in-person and online and wherever you can get it. If you start isolating yourself to only some things then you can't take advantage of the rest.

Information is everywhere. We have to be receptive and critical and persistent.

I also think it's important to get into the habit of validating things you read or see or hear. Don't assume. If someone tells you tomatoes are bad for you because of XYZ, you should validate it, no matter how much you trust them. Some of hte most intelligent posts I've seen on ATS come from people who verify what they read BEFORE posting about it. Important things can be missed otherwise.

I oftentimes do not do the things I suggest here. I am a lazy guy. It takes a lot of work to validate things or to look deeper or to look everywhere. The consequence is sometimes I just do things on my gut feeling. It's like faith.
edit on 15-3-2014 by jonnywhite because: (no reason given)


You can see that at work, at times, here as well.
The stigma "skeptics" enjoy being a prime example.

In my humble opinion it's a left over from our hunter gatherer days when group cohesion was REALLY important.


Well thanks, that was a good description of the other viewpoint.

There are a lot of advantages to the internet being able to provide everyone with information.
edit on 15pmSat, 15 Mar 2014 19:35:11 -0500kbpmkAmerica/Chicago by darkbake because: (no reason given)

You have to wonder if that's what the Jewish no pork thing is all about.
edit on 15-3-2014 by The Cusp because: fat fingers


Well thanks, that was a good description of the other viewpoint.

There are a lot of advantages to the internet being able to provide everyone with information.
edit on 15pmSat, 15 Mar 2014 19:35:11 -0500kbpmkAmerica/Chicago by darkbake because: (no reason given)

There is nothing wrong with using the information on the internet or any other source. The problem is with lack of discernment and thinking about what your source is. And that is where the lack of critical thinking comes in. Like anything, you have to assess the quality of the information you are getting.

People don't think about why Wiki isn't the best source; they just use it.

People don't think about why they might want to question what they see on any of the news nets; they just parrot it.

And the worst of all - People look a thing up, and it's disposed just that quickly. They no longer have to actually acquire and own/master the information for themselves. They have mistaken having ready access for having mastery and knowledge.

The Cusp
What the OP is describing is the "Lower Primate Committee Thinking Experiment". I swear it was a real experiment I read of years ago, but google is only turning PETA type animal testing pages.

click the second link in that search page for a PDF file. It's safe, I just can't link it it up here. That will lead you to this:

That experiment is used as a model to help companies change. Too bad it doesn't work too well for people when they're off the clock.