What percentage of Americans get government assistance?

what percentage of americans get government assistance

And then see what it says. Any guesses?

The reason I am pointing this out is that I am continuing to see the effects of a bad economy on my friends and I, and I was just wondering, based on how many educated people I know who are getting assistance, how many people are.

We must be getting low on ideas today. Another thread by Thurisaz inspired this one, and his was inspired by Obama telling people to "prioritize" their budget by cutting out cable and cell phone services so they could afford his health care.

Thurisaz mentioned the idea that living on the government's dollar makes you their property, an idea I expound on in his thread "Basic's Card
edit on 14amFri, 14 Mar 2014 07:35:32 -0500kbamkAmerica/Chicago by darkbake because: (no reason given)


The following link from The Heritage Foundation is tracking our nation's citizens' dependency on the government as a growing threat.

The 2013 publication of the Index of Dependence on Government marks the 11th year that The Heritage Foundation has flashed warning lights about Americans’ growing dependence on government programs. When discussing dependence, one must make a careful distinction between different kinds of dependence.

According to Yuval Levin, the editor of National Affairs:
We are all dependent on others. The question is whether we are dependent on people we know, and they on us—in ways that foster family and community, build habits of restraint and dignity, and instill in us responsibility and a sense of obligation—or we are dependent on distant, neutral, universal systems of benefits that help provide for our material wants without connecting us to any local and immediate nexus of care and obligation. It is not dependence per se, which is a universal fact of human life, but dependence without mutual obligation, that corrupts the soul.[6]

The 2013 Index of Dependence on Government

Unfortunately, that is true - now, I want to make the clear distinction here that I want no name-calling of the people who are trapped in the dependency machine. The issue is that the alternative, having ways to get out, is not necessarily there - sometimes, it seems, on purpose or out of neglect by the government.
edit on 14amFri, 14 Mar 2014 07:41:31 -0500kbamkAmerica/Chicago by darkbake because: (no reason given)


It is bad for your own work ethic/self worth to live off the dole but, more importantly, it isn't free money, it comes from taxpayers and a huge proportion of it never actually finds any people in need.

Therefore, not only does it not perform its stated function, the cost of the failed attempt harms the economy.
edit on 14-3-2014 by greencmp because: (no reason given)


My argument is that people do need the benefits. However, that is because the system is designed on purpose for them to need the benefits. A subtle difference, but a major one nonetheless, because it means that focusing on systematic changes would be worth-while.

Of course, I agree with you that there could be more efficiency in hand-outs - but really, I think it is pretty efficient already. I actually don't think efficiency in distribution should be focused on to the point where economic growth is forgotten. Any system can be efficient, but without new energy sources, cripple itself eventually.
edit on 14amFri, 14 Mar 2014 07:49:51 -0500kbamkAmerica/Chicago by darkbake because: (no reason given)


Indeed, I do recognize that people do need help sometimes.

I think it is better for people to be charitable locally and directly.

As a rule of thumb, the CBO attributes only 40% of federal dollars budgeted for the needy as reaching their target. I do not give them that much credit, I think it is closer to 15%.

I believe that what is left of the aid is distributed in a way which perpetuates dependence psychologically, symbolically and actually.
edit on 14-3-2014 by greencmp because: (no reason given)

Therefore, not only does it not perform its stated function, the cost of the failed attempt harms the economy.
edit on 14-3-2014 by greencmp because: (no reason given)

posted on Mar, 14 2014 @ 07:52 AM
link
Last year. I actually was trying to figure out which state has the highest percentage of people on welfare/disability, but I couldn't find any statistics that I would hold as proof. I was curious and wanting to know myself, but along the way down that rabbit hole I was distracted and started researching something else! Based on what I did see, Hawaii seemed to have some oddly high numbers, but again, I'm not sure if I believe what I read. I would like to see someone with more time than myself put together a chart showing these statistics.

*I know there are people who're hurt, sick or just need a little help, but welfare needs to end and a new system put in place. There also needs to be something done about people getting disability. It's apparently easy to get it if you act crazy.
edit on 14-3-2014 by Fylgje because: forgot to add something


I can definitely see the benefit in a healthy, self-reliant community of families, churches, small businesses and the like. Think of the family - it is a structure that can protect itself. The same thing with a community church (regardless of religion). Both of these are in direct competition with the Government for the services they provide.

If you weaken the family and the community to the point where everyone are strangers, you have easy pickings for the government to come in and offer "assistance."

What I see as the liberal goal is a country full of individuals with no attachments to each other who have their needs met by the system, and they really do function kind of similar to slaves, however with a higher quality of life.

Fylgje
*I know there are people who're hurt, sick or just need a little help, but welfare needs to end and a new system put in place. There also needs to be something done about people getting disability. It's apparently easy to get it if you act crazy.
edit on 14-3-2014 by Fylgje because: forgot to add something

I think the real issue here is that society needs to be more open and more open-minded, even at work. People have gotten used to making a hissy-fit at the smallest sign of an eccentric or unique person, and this does make it hard for people who think for themselves to get work.

When I went to college, I would often approach and talk to people, because I was a bit different, and some girls got it in their mind that it was "creepy" and I was constantly being reprimanded for eccentric behavior.

I did well for myself, of course, but not for lack of hardship resulting from quirks or whatnot. So my point is, I don't think eccentric people feel safe at work, and with good reason.
edit on 14amFri, 14 Mar 2014 08:06:25 -0500kbamkAmerica/Chicago by darkbake because: (no reason given)

I wasn't sure if anyone would check.


I don't know about other programs, but here is a chart for food stamps from 2013 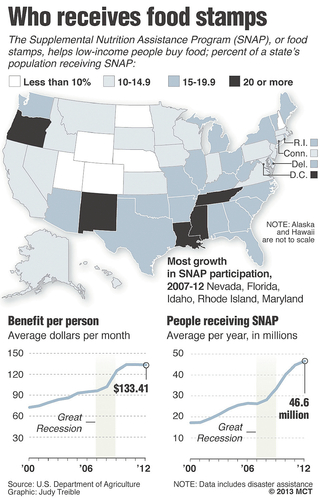 But I do know that my ex-wife gets food assistance, cash assistance, they pay for at least part of her housing.

She has a nicer car than I own. She is currently trying to gain weight so that she can get a free gastric bypass operation... courtesy of Medicaid.

Oh, and even though she doesn't have a job, and hasn't ever paid me a cent of child support, she somehow managed to pay for breast enlargement surgery.

Why do I bother holding down a job??? (other than pride?) 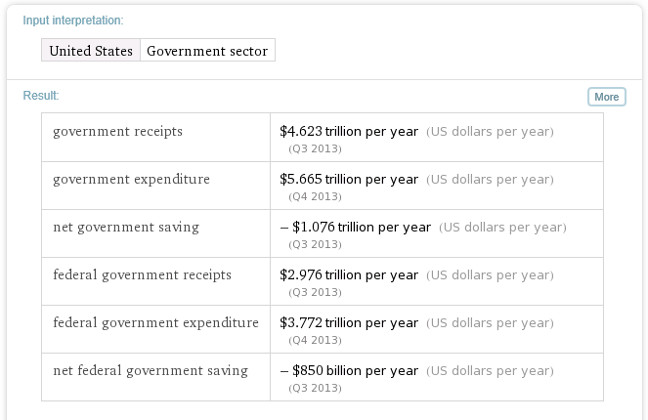 Well, seeing as the Government itself is the largest recipient of government assistance...to the tune of 1.076 Trillion per year...


The REAL question should be, What percentage of ILLEGALS get government assistance?

posted on Mar, 14 2014 @ 09:20 AM
link
We have a major problem with this economy we have created where we don't produce enough of the things we need. There are some well paying jobs but this small percentage cannot support all the people. We need to start producing toasters, blenders, and other items we need instead of importing them to stabilize the economy and work force.


I'm not sure what that percentage is but I expect that it will continue to grow unless we figure out how to rebuild and retain our manufacturing base. Or at the very least, redirect our efforts towards more labor intensive endeavors like infrastructure maintenance & repair. In some cases, (like our nation's electrical grid) a total rebuild may even be necessary.

We're going to need to re-structure our tax system as well. Here's what I'm talking about;

A while back, I was watching an episode of "Real Time with Bill Maher" when one of his guest brought up an interesting little fact that we as a nation are going to have to address and the recent IPO valuation of the "Candy Crush" game is a perfect example of what she was talking about.

In case you hadn't heard, the maker of the Candy Crush game is placing an Initial Public Offering valuation of his game at 7.6 billion dollars, which is probably a little high but that's not the point.

This is the point; In the "old" days, the only companies that had valuations anywhere near this level were huge companies like General Motors, Ford, General Electric, etc... all of which employed huge numbers of people who in turn paid taxes on their individual incomes.

Today, we have just the opposite. We now have more and more companies, (namely internet overnight sensations like "Candy Crush") with huge valuations and almost non-existent payrolls, at least by comparison. And we wonder how 85 people got more wealth than half the worlds population!

Couple that with our current top marginal tax rate of around 38%, (which nobody pays) and you have a recipe for disaster. Hell, in times past our top tax rate was as high as 90% and even when Carter was POTUS, it was around 70%. I just don't see how we can continue on this path of lowering tax rates while eliminating jobs.

Regardless of what Fox News would have us believe, what we have today are "Wealth Creators," they are NOT "Job Creators" and we need to figure out a way to deal with that fact.


The REAL question should be, What percentage of ILLEGALS get government assistance?


I would argue the simple fact that when a subsidy is provided, costs go up and quality goes down. Eliminating federal social welfare programs will solve that problem too insomuch as it can.

posted on Mar, 14 2014 @ 11:28 AM
link
I've see a growing number of people need some kind of help. But I've also seen a very large number that call on the help but don't really need it. They're good at finding loop holes or out right lie to pull more money to them. I know one person that some how manages o have two homes in two different states has a high paying job and can still some how get food stamps, I've not figured out how.

My families been lucky and haven't needed any help but it gets harder every passing year.