I see the cycle of something larger and smaller. A new measure for me.
If alternating between every other one starting and ending with the respective points of a straight line and those of a sphere composed of infinite points into every direction, an exact instance of infinity can be measured. Think about that.

Anything measurable is potentially alterable.

These are the exact measure of a portion of an infinitely winding "direction" or point into or from two others. They Show us the exact parting point from a straight line like x, y and z coordinates on a graph.

In two points to "reality", creation and destruction respectively, we find dimension and depth by parting from both. In measuring both and seeing the "form" of the straight, measured line composed of two points in all things, we also find an infinite center point between two points in a line. Now we have yet another point or rather direction ...to part from or wind into.

So by seeing the line, measuring it, and learning to part from or towards its two points (directions) completely, we can know the measure of a curve into infinity. We can choose the direction of infinity once infinity is a single point to us.

That is this pattern as I see it.


This is the best intro to Fractals I have seen.


Excellent post. Have you tried applying this theory to frequencies and their observed effects in this world?

A rectilinear figure is said to be inscribed in a circle when each angle of the inscribed figure lies on the circumference of the circle.


That all right angles equal one another.
- Euclid's Elements
- Book I
- Postulate 4.

Anything measurable is potentially alterable.

These are the exact measure of a portion of an infinitely winding "direction" or point into or from two others. They Show us the exact parting point from a straight line like x, y and z coordinates on a graph.


Winding is a fascinating subject. One that took the old timey physicists by surprise. It was during the laying of the Atlantic Cable. Well ... one of the early attempts anyway. Carl Friedrich Gauss (Gauss himself) developed knot theory while at sea trying to figure out why the cables kept breaking. It assigns integers to windings. Minus one if counter clockwise and plus one if clockwise. With this one could determine if any knot was actually entangled.

Some knots are not actually entangled and can be pulled apart. 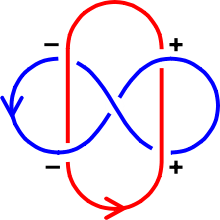 The two curves of the Whitehead link have linking number zero.

tadaman
These are the exact measure of a portion of an infinitely winding "direction" or point into or from two others. They Show us the exact parting point from a straight line like x, y and z coordinates on a graph.

What you discuss at the end of the quote above. I'm not sure how much it formally exists yet. A third dimension to knot theory. Say a gravity axis. In the laboratory of my mind I render up a cluster of six long lines, all attached at the same point, and spinning so that each one is equally spaced from the other and stretched out straight. If the spin suddenly stopped, wouldn't the six lines coil up away from, and perpendicular to, the point.

Observationalist
I'm with ya on this one, I see numbers as vivid patterns, capable of creating complex blooms and simple structures.
You should check out my thread,www.abovetopsecret.com

This was my "ah ha" moment that brought deeper meaning to the numbers I use to hate.

I appreciate you sharing.


HEY !! you're back.I think I answered one of your post when I first became a member.You were definitely onto something with your investigating the calculations of 37 which I was not aware of at the time.The quality of 37 and how it spins out sums is amazing.Here is just a small "37" teaser.

It starts with gematria (Hebrew) and isopsephia(Greek) which are when the letters of an alphabet equal numbers(It can be done to any language).Hebrew gematria started about 300 B.C.E.

Jacob was born about 2,000 BCE(who later was called Israel).He had many misadventures and eventually married and had 12 sons by 2 wives and 2 of his wives maidservants. There was a very definitive pattern to many things about the Sons and their "names".

Leah was Israels 1st wife and was the 1st to have kids she had 4 in a row
Reuben,Simeon,Levi,Judah
Then since Rachel his 2nd wife wasn't having any kids((and she was the hot one) Rachel had her maidservant give it a go and she had 2 sons
Dan, Naphtali
Then Leah's maidservant had 2 more
Gad,Asher
Then Leah had 2 more for the team
Issachar,Zebulun
Then Rachel had the final say with her last 2
Joseph,Benjamin

So the count was Leah 8 Rachel 4..Leah WON!!!! okay not really...however it was somewhat of a contest.After each birth the mother named their child(almost out of spite!).The names had meanings however more importantly those names were also NUMBERS!Names are significant in that they are the nature and character of the thing/person named.The word names meanings were important however it was the numbers that are the real meanings and purpose(even if the purposes aren't know).

Here's how it developed.Joseph the 1st born of Rachel was hated by his brothers(except Benjamin).They faked his death and sold him into slavery to the Egyptians. He later rose to be 2nd in charge to the Pharaoh and saved all of the Tribes of Israels ass (and then his brothers hated him even more!) but that's another story.In the process in Egypt Joseph gave his "birthright"(he didn't need it) to his two sons Manasseh and Ephraim.

Now there were officially 13 "son heirs" to Israel.About 400 years later when Moses led them they went back to 12 when the tribes of Levi(which was now 4 sub tribes one which Moses and Aaron were in) became the priest and had no inheritance.

The Israelites made what is called an ephod for the priest to wear when he stood before the ark.On the breastplate were the 12 stones representing each tribe of Israel.They were arranged according to birth order(omitting Levi and Joseph and adding Manasseh and Ephraim).It was arranged from the "priests" left to right in 4 rows of 3
3-2-1
6-5-4
9-8-7
12-11-10

Now comes the cool part!Here are their gematria numbers.

This may look arbitrary and to the Israelites it was.They had no idea those names meant numbers also.They followed a very similar pattern when camping in the wilderness for 40 years but ...that's another story and numbers.

The sum of all these numbers are 3700...which of course is multiple of 37(37x100) it goes deeper... the order is very significant. Remember their mothers had no idea when they named them what these numbers were and they were not altered at a later date.

That is not just an ordinary number .It is also the number of a very significant name.....Jesus(whose real Hebrew name (transliteration) is Yahoshua.The New Testament was written in Greek.The Greek Isopsephia reveals the number of his name.(btw christos is a title name not a family name).

That is 7 of 12 names.4 of the 7 are Rachel's(she wins!! even though she died giving birth to Benjamin)

btw 296 is the key to all of these patterns....which is the gematria of "earth".

The symmetry and sums are unmistakable as patterns.They are not coincidences neither were they contrived by the Israelites and again ....this is only the calculations with 37 are inextricably tied to many many things.This is NOT numerology or Kabbalah or any mystic BS.Numbers don't predict events nor are they incantations.They are objective "signs" for what things are.


Nice work Rex, I appreciate you posting. We need to talk.

For those who are wondering where all this came from! the 37 number does have a unique roll. Here is a video on it.


And the pattern at work

I imagine the discovery of numbers to the ancient civilization must have been mind blowing. My approach is to feel like I'm discovering numbers for the first time. I try to stay objective and see the numbers as numbers first, I'll let others add the significants. Personally 37 has some significants, and Rex just blew me away.

edit on 14-3-2014 by Observationalist because: Added break


Nice work Rex, I appreciate you posting. We need to talk.

And the pattern at work

I imagine the discovery of numbers to the ancient civilization must have been mind blowing. My approach is to feel like I'm discovering numbers for the first time. I try to stay objective and see the numbers as numbers first, I'll let others add the significants. Personally 37 has some significants, and Rex just blew me away.

edit on 14-3-2014 by Observationalist because: Added break

Yes!! 37 is freakay! and yes the significance in most numbers aren't known.The key to understanding them is in a ratio.37 is just the number 37 by itself..it's all the factor patterns that create a web...of LIFE!!....and no ...I'm not getting mystical (said the LEAST mystical person on the planet).

The most significant number sequence which produces the most significant ratio is the Fibonacci number(Fn) sequence and it's sister sequence the Lucas numbers(Ln)...which sum the Golden ratio phi/Phi that EVERYTHING in the known physical universe from atoms to DNA to spiral galaxies... is created from....and YES Fn and Ln sum 37(8+29=Fn6+Ln7 and 3+34=Fn4+Fn9 and 55-18=Fn10-Ln6) in ways I have not even begun to explore.k..so keep on mathing and K.I.S.S

It speaks of the relationship of the Fibonacci sequence and the Golden Ratio to the solar system. It speaks to fractals as well in the method applied.

Here is the abstract.

The linear recurrence equation: an = an-1 + an-2 with the starting conditions: a1 = a2 = 1 generates the familiar Fibonacci series: 1,1,2,3,5,8,13… This paper will use the first twenty terms of the sequence to demonstrate a close match between the Fibonacci series and the dynamic relationships between all the planets, and two dwarf planets in the Solar System. The average error across the twenty eight data points is demonstrated to be under 2.75%. The scientific implication of the result is discussed.

I thought it was well done. Give it a read.

On a side note: Its just a matter of time before space travel is made easier in terms of navigation when we finally start to see a pattern to the dispersal of matter int he universe. Once we see the structure we can understand the design.

I imagine that not only is all the matter of the universe dispersed in such a way that a pattern can be seen but also in the structure to life itself.

The Fibonacci sequence, golden ratio, phi....all of these sacred numbers to creation are once again being spoken as a language. They are all suspected by many of being all things. Here the overall structure is starting to be revealed to us as a species.

This is the best intro to Fractals I have seen.