Does someone remember the name of a cartoon I used to love? Black panther featured.

....I remembered that I've never asked ATS to help me remember the name of a cartoon program I used to love.

It was a woman who would change into a human superhero man (I think that's what it was, or the other way around?) and she would have a black panther with her on her crime fighting deeds. She would dress all in black for her role as a superhero. It was semi-dark, and had very good storylines and psychological insights.

Does anyone remember it (or maybe I'm the only one who doesn't and it's a recognized classic)? Thanks for any help with this.


Yahoo said it was cyber six?

I could be wrong though.

Go to Wikipedia: A Carton called BLACK PANTHER on BET Network. Info is there. May be the one...
en.wikipedia.org...(TV_series)
edit on 09-22-2013 by mysterioustranger because: (no reason given)


Thanks, isn't it though. This character was white (darn if I can't recall if it was a woman who was a man when in costume, or the opposite), but had a black panther as a companion.

I am thinking it's Cybersix as well. Look familiar? 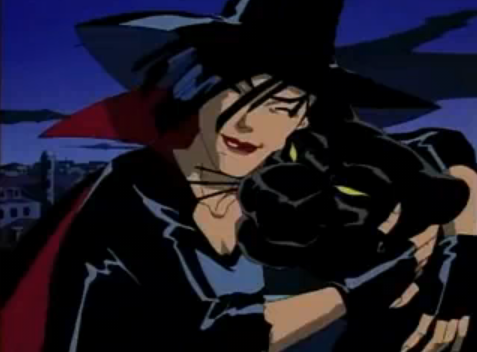 Don't hate me, it was funny and you know I'm just playin around. And I get a free pass because I have African American family members and I love them. So there. Haha

posted on Mar, 13 2014 @ 08:44 PM
link
That's it, I'm pretty sure. Yes! Thanks everyone! Cybersix. I don't remember it being so Japanese in drawings and villians, but I watched a few minutes of the first episode and that sure looks like it.

Thank you very much. And like I said, it probably has a billion fans and I just missed any mention of it after watching a few episodes long ago (then it was taken off the air where I lived). I'll youtube an episode here, what a great opening song! Here is episode one:

I'm probably going to watch all 13 episodes in the next day or so. The song at the start brings it all back.

Here's the Wikipedia page. I didn't consciously know almost any of the history, just the general feeling and emotion of the show. And it is a woman who goes as a man during the day, as a high school teacher.

The heroine of the series is the eponymous character, Cybersix (more properly Cyber-6), a leather-clad, genetically-engineered superhero who by day masquerades as a male high school literature teacher, and by night battles the monstrous biological weapons of her creator. She is aided in her adventures by her younger brother Cyber-29, who was reborn in the body of a black panther known as Data-7. The extended cast includes Cybersix's colleague and love interest Lucas Amato, a student named Lori who is in love with her male guise, and a young streetwise boy named Julian, among others.

Nah, that's nice you gave a good guess. I was never into some of the cartoon characters, and Black Panther was one I missed. Sounds interesting though, and worth a look too.