25 Maps To Help You Understand Your World 2. This map shows (in white) where 98 percent of Australia's population lives. 3. It may not come as a surprise but more people live inside the circle than outside of it. 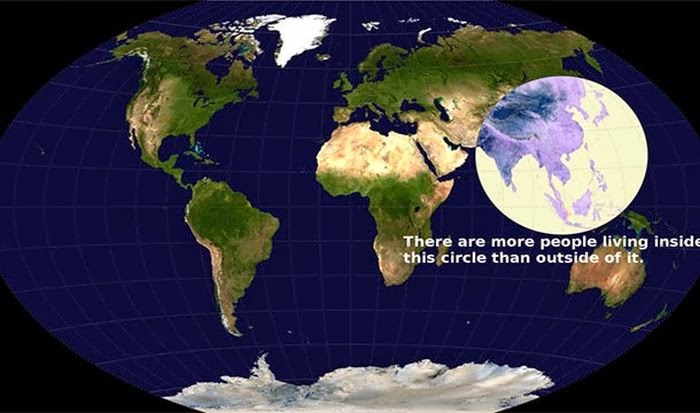 4. This map shows what is on the other side of the world from where you are standing. For the most part it will probably be water. 5. Apparently you can't get Big Macs everywhere. This map shows (in red) the countries that have McDonalds. 6. This map shows the countries (in blue) where people drive on the left side of the road. 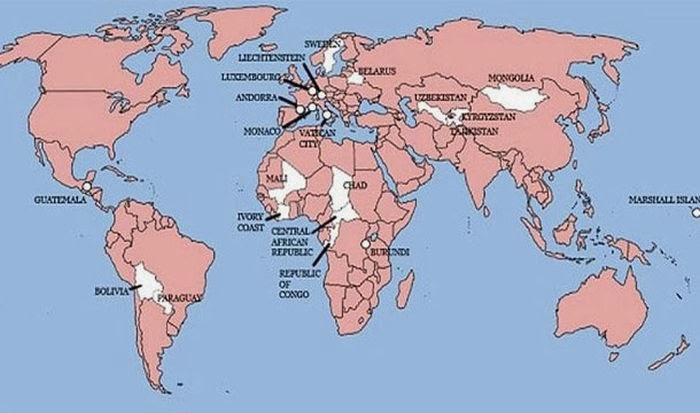 8. The line in this map shows all of the world's Internet connections in 1969. 9. This map shows the countries that heavily restricted Internet access in 2013. We can add the U.S. with the yellow.

10. This map shows (in red) countries that were all Communist at one point in time. 11. This map shows (in red) the countries that don't use the metric system. 12. This map shows (in blue) places where Google street view is available. 13. This map shows (in green) all the landlocked countries of the world. 14. And this is what the world would look like if all the countries with coast lines sank. 15. This is a map of the all the rivers in the United States. 16. And these are all the rivers that feed into the Mississippi River. 17. This is a map of the highest paid public employees in the United States. 18. This map shows how much space the United States would occupy on the moon. 19. This map shows the longest straight line you can sail. It goes from Pakistan all the way to Kamchatka Peninsula in Russia for a total of 20,000 miles. 20. This is a map of 19th century shipping lanes that outlines the continents. 21. This map shows (in navy blue) every country that has ever operated an aircraft carrier. 22. This map highlights the countries (in red and orange) with the most skyscrapers. 23. This map shows (in red, orange, and yellow) the world's largest donors of foreign aid with red being the biggest donor. 24. This map shows the most photographed places in the world. 25. And this map shows all the places where you can get eaten by a Great White shark! I actually did learn something. And I feel like I actually do understand the world a little better.

We need another that shows all the countries with tyranical leaders

7. This map shows countries (in white) that England has never invaded. There are only 22 of them


They did not claim to be an Empire for nothing.!. Very impressive for a small island... So much history... They were busy bees that's for sure. Guess you have to figure which end of the sword, cannon, or rifle you were on to appreciate Great Briton.


Great OP! Thanks for putting this together.

I've always loved maps and have a particular affinity for antique maps. I've collected a number of them and have gotten a number of others interested after seeing some of my favorites which I've framed and hung in various rooms of my house.

I thought all of these were interesting but I particularly liked the US grafted onto the surface of the moon. Really gives you some perspective of both.


Thank you but I can only take credit for copy and pasting from e-mail. I just thought this was pretty cool. BTW I think my favorites are the ones showing populations.


You wouldn't have any spare treasure maps, would you?


Yeah but from what I understand it is guarded by treacherous demonic forces. You are welcome to the map but yee been warned. 
You wouldn't have any spare treasure maps, would you?

Feast your eyes on this treasure map, matey!

Of course now that we've posted our maps on ATS, every landlubber and his brother knows where to dig.

Another good compilation from buzzfeed, some repeats -27 pictures that will change the way you look at the world-

I like the vegetation one they have here where it shows what areas get frosted over.

"40 more maps to help you understand the world"

I was surprised by the map of Africa from a missionary.

Cool thread OP. I like these types of maps. The one that trips me out the most is the US superimposed on the moon. I always think of the moon as being much larger than it really is.
edit on 1320140320141 by Domo1 because: (no reason given)


Very cool thanks. I wish I had those links when I started the thread. It is late here so I am off to bed, but I may download then add post the pics here in the morning.


Not sure if you'd be game but I was thinking perhaps we could scour the web for even more of these and maybe make a thread where there are links to albums with maps organized by economics, religions, human rights, languages and whatever else we think would be a cool category. Would also be able to insure we don't have repeats like the ones I linked to.

I'll help, but you post it since it was your idea to plop maps in one place. I think it would be a fun and informative project and with certain maps in one place it seems a little easier to digest than going from economics to population size to rivers.

I have too much time on my hands. I think it would be a fun collaboration, lemme know. Shoot maybe we could even start a thread and let other members volunteer to gather specific types of info maps.

posted on Mar, 14 2014 @ 02:37 AM
link
Very interesting maps indeed. As for map 6 about the left and right driving of the road - here in Africa we actually mostly drive on what is left of the road

posted on Mar, 14 2014 @ 03:11 AM
link
Thanks a bundle for such good maps, much appreciated.
Your post prompted me to skim through my two Readers Digest atlas of the world, most interesting, geology, mans explorations, our place in the universe, food production, much more.


I love it! Original (a big plus) yet interesting! Now check out Mongolia - there is a strange country for you. One of the ones never invaded by Great Britain, either - and very isolated! Shows up in a lot of interesting ways on the maps. Between China and Russia
edit on 14amFri, 14 Mar 2014 04:19:27 -0500kbamkAmerica/Chicago by darkbake because: (no reason given)