posted on Mar, 13 2014 @ 06:26 PM
link
No, I'm not being flippant.
With the new news that flight MH370 sent signals to a satellite for four hours after it disappeared, it would be pretty easy to draw a circle on a map encompassing the total area the flight could have made it to.
Then, excluding the Ocean, let's start looking at and discussing areas within that circle where a plane could potentially land, safely, either without authorities noticing, (which may be impossible) or in such a place where authorities would keep there mouths shut, (because they want the plane, or who or what is in it.)
I will attempt to do this later, but I'm at work right now, and just wanted to throw this out to the skunks, so they could get to work.

posted on Mar, 13 2014 @ 06:31 PM
link
We cannot simply dismiss the ocean. Upon losing signal from the transponder, the flight still possessed enough fuel for approximately 6 hours of flight. The satellite data suggests the plane was still sending data for 4 hours after the transponder went offline. In theory those 4 hours could've been over a body of water, and the plane could have potentially crash landed in the ocean (i.e. Indian Ocean).

Furthermore, it has been suggested on MSM that the flight had enough fuel for 2500 KM of air travel. Therefore, current search efforts are combing over an area with a diameter of 5000 KM. That is quite the search area, hence why search efforts have been fruitless thus far.
edit on 3/13/2014 by Pistoche because: (no reason given)


Absolutely, let's keep searching everywhere.
But just for the sake of argument, let's assume someone stole the plane and landed it somewhere....
1.) Where could that be?
2.) Where would be the most likely to "allow" that to happen, or "miss" that happening?


Thanks, I don't know what LRO means, but thanks for looking...

posted on Mar, 13 2014 @ 06:37 PM
link
In reality, the plane should be tons easier to find as i`m those reports include location data, considering altitude was include......be able to point direction and during those four hours............if `they` really wished us to know, they would release the raw data to overlay and allow some real number crunching for probable locations.......


That's what I thought,
How could you land a jet somewhere without "everyone" knowing?
An object falls from space, bigger than a pencil, and everyone knows about it.
So the fact that a jet disappears (at least in this theory) seems impossible, unless you knew how to make it seem like it disappeared.

Then there's the fact that eyeballs on the plane would probably be noted by now.
As in, "I saw a plane land in a field on such and such island while drinking my sex on the beach, thought it strange then, didn't think of it till now..."

posted on Mar, 13 2014 @ 06:48 PM
link
Agreed, and this might be pessimistic, but....the powers know how to fly it remotely, where to fly it to avoid civilian radar and cell towers, they also know where to fly it to for a covert landing away from prying eyebals.......to avoid that, `da plane boss, da plane`.......my gut is looking at northwest australia, a lot of american activity there and lots of desolate territory..........


Edit-and to throw off trail, we havea radar contact in opposite direction to get hunters heading away from true direction....then a few sat images that turn out to be nothing just to muddy the waters even more
edit on 13-3-2014 by pointr97 because: (no reason given)

pointr97
In reality, the plane should be tons easier to find as i`m those reports include location data, considering altitude was include......be able to point direction and during those four hours............if `they` really wished us to know, they would release the raw data to overlay and allow some real number crunching for probable locations.......

ACARS (Aircraft Communications Addressing and Reporting System) reports to the Rolls Royce engine health center do not contain location. They are burst transmissions giving engine health data. And Malaysian Airlines did not subscribe to the Boeing service so no reports were successfully gathered.

posted on Mar, 13 2014 @ 07:04 PM
link
Possible scenario, The plane was hijacked... The only airfield it could have landed at without being detected at night is Quetta Airfield, Pakistan.. Not far from Afghanistan... Flying alow enough to avoid radar detection... 1000 meters, means greatly decreased fuel economy, therefore it would have ran out of fuel and crashed in the Arabian sea if this was the case. If it did land Government agencies wouldn't say because they would be organizing a covert operation to recover the aircraft and the passengers if they are still alive.
edit on 13-3-2014 by Snerty because: (no reason given)


The Wall Street Journal first reported that U.S. investigators suspect that the engines kept running for up to four more hours after the plane reached its last known location. The paper later corrected its report to say that this belief was based on satellite data, not signals from monitoring systems embedded in the plane’s Rolls-Royce engines. The Malaysian government denied the initial report.


One senior administration official said the data showing the plane engines running hours after contact was lost came from the Aircraft Communications Addressing and Reporting System, or ACARS, a way that planes maintain contact with ground stations through radio or satellite signals. The official said Malaysian authorities shared the flight data with the administration.

So Malaysia has denied the fact the engines were still running, there was a form of communication between the aircraft and satellite. But the US government is saying that it is true and Malaysia provided them with the flight data. WTF Malaysia!


If we can find out who (if anyone) sold the airline and tech stock short just before the disappearance....That would provide some clues.....Any of you know how to do that?

IF the plane were taken; WHY? If they just wanted to the plane for the monetary value, it would have been a whole lot easier to steal one that wasn't full of people.

This leads me to think that they wanted the people.

So WHY the people? Hostages? Or because of someone specific on board? But WHY?

No one is claiming responsibility. That makes me nervous. Most terrorist organizations would be taking the credit immediately and be making their demands.

Makes me think there is something bigger....IF that is what is going on.

SO...what key government or political tactical location is within range? (if the jet were to be refueled.) That IF it were landed in the above mentioned radius, re-fueled.....where could it go 'under the radar'?

I am thinking mass suicide/murder by flying the plane into something. Fukashima? (I am just thinking out loud now)

The silence is the most unnerving. I hope and pray these people are alive, but if they ARE then something very sinister is going on. 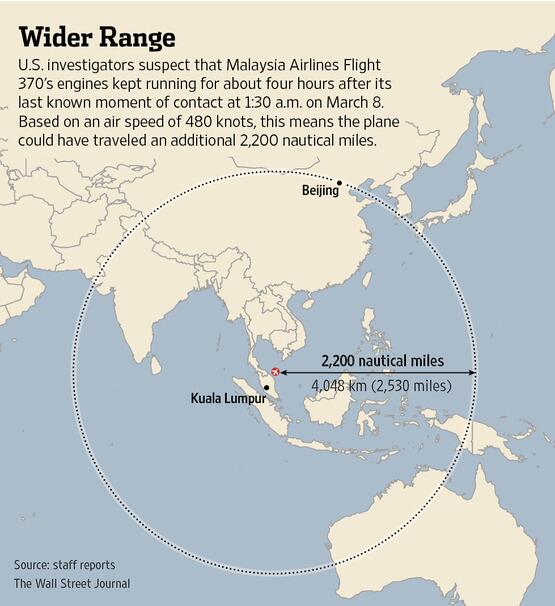 There are thousands of islands in this part of the world.


I personally keep returning to the 20 people onboard that worked with "cloaking" capabilities.

WHO would want that technology? WHO would be able to utilize it when they had it? And WHAT do they want it for?

posted on Mar, 13 2014 @ 07:40 PM
link
What baffles me is that with all this technology they have today. Could they not equip airplanes and such with a waterproof 500+ meter GPS tracking device just in case of such a scenario? Hell, even if I lose my cell phone I can track it, wipe out the phone, and lock it, even without a SIM card in it. As long as it's on. I'm sure we can figure out ways to make blast proof GPS devices, plug them into the front and rear of every plane, done.

posted on Mar, 13 2014 @ 07:42 PM
link
There are plenty of private islands for sale or lease in this region,
www.privateislandsonline.com...

All a terrorist organization would need to do is build an airstrip big enough to land on.

It was probably hijacked and flown to a U.S airbase there to be used in a future "terrorist" attack.


I personally keep returning to the 20 people onboard that worked with "cloaking" capabilities.

WHO would want that technology? WHO would be able to utilize it when they had it? And WHAT do they want it for?


Fly a cloaked airliner outfitted with an EMP device and once the plane is in the center of any technological dependent country detonate it. Then sit back and wait for that country to destroy itself from the inside out. Later you move in and "reconstruct" that country to your liking.

WHO wouldn't want that technology? It's a game changer.
edit on 13-3-2014 by TheLieWeLive because: (no reason given)