Contemplating the Capacity of Our Ancestors

posted on Mar, 13 2014 @ 02:38 PM
link
We are all, at times, guilty of not giving ourselves enough credit. Just as frequently, we neglect to recognize the ingenuity, resourcefulness, and sheer ambition of our ancestors. The magnificent pyramids of Giza and several other locations around the globe, the Colosseum and Pantheon of Rome, the Great Wall of China and, more recently, the Taj Mahal - these marvels are a mere few of all the wondrous architectural products of mankind's past, and for millennia these structures have been regarded as symbols of what our species can imagine and accomplish. Similarly, our predecessors created objects without which life as-we-know-it would be quite different indeed. In China gunpowder, the compass, paper, and printing were all invented before the tenth century A.D.; each having unfathomable significance in today's world. It is thought that as many as one million years ago or more, prehistoric man acquired the ability to control fire. Today, it seems that science has leaned more toward improving old designs and making improvements on old inventions, but that is certainly not to say there's no more left to learn, and on a universal level the sum of all we know is surely just the tip of the iceberg.

Ancient inventions and architecture are under constant scrutiny, and it seems like new discoveries are happening at an ever-increasing rate. Case in point, consider how long of a time was between the stone ages and the bronze age, then the bronze age and the iron age, then the iron age and the industrial revolution, and finally the industrial revolution to present day. Human evolution, both physical and intellectual, is happening on an exponential scale. These two graphs chart the size of the human brain over time and the progression of human population.

Being, what we typically consider ourselves to be, an "advanced" species, we naturally find ourselves questioning just how did our ancestors do it? How did they, for example - without modern astronomical technology and understanding, place their megaliths in arrangements that correlated with stars and constellations? How did they manipulate the materials they used in such magnificent ways without modern tools - or perhaps, even, tools more advanced than our own? What influenced ancient art and architecture and how did they complete such gigantic projects that would take us extraordinary manpower and lengths of time? 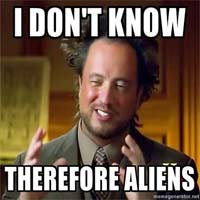 There are tons of posts on ATS about the influence of extraterrestrials on human history (or the argued lack thereof) - it's a topic with which both believers and skeptics have a field day. The fact of the matter is WE DON'T KNOW whether or not aliens aided ancient humans. Let's put that discussion on the back burner for a moment. I brought it up as a testament to the current state of mankind's reasoning: that which we do not understand is frequently chalked up to something unearthly, paranormal. The irony is that extraterrestrial life is something we understand even less than the mysteries of antiquity. I'm only human of course, so I'm no exclusion. Personally, as a result of what I've learned and have experienced, my beliefs regarding our ancestors' relationship with aliens, and the fruits thereof, lie in what I consider to be a "happy medium". I think the biggest factor here is that ancient humans were far more in tune with the natural world than we are today. They lived immersed in nature, whereas the modern day Average Joe works 40 hour weeks in an office job, then goes home and eats a microwaved dinner while watching wrestling. Not very conducive for self development, and definitely not helpful to humanity as a whole.

Regardless, it is undeniable that our forefathers achieved wonderful things. By forefathers I mean "forepeople", because of course we have ancient women to thank too. In fact, if ancient man had found a way to reproduce without women (something China seems to be hopeful for, frankly) we would have warred ourselves to death in a hurry... but I digress. For the sake of examination, and also because of the lack of evidence to the contrary, lets assume that everything mankind has accomplished has been a product of nothing more or less than our own efforts. Doesn't it feel good to not ponder those imponderable questions for a moment?

I'm tired of typing and seeing as how this is a "discussion forum" - how would a day in the life of an ancient be different from ours? Were they happier than we are in this golden age of technology? Are you one of those who thinks E.T. built the pyramids? Is it so unlikely that ancient man alone could have been responsible for the pyramids, Stonehenge, and Puma Punku, even though today we can build skyscrapers that reach to the clouds? Do you think our technology is too advanced for our morals (nuclear technology being applied to warfare, etc.)? Are we going to continue to evolve or are we going to take a turn in the opposite direction?

posted on Mar, 13 2014 @ 04:42 PM
link
You wrote "how did they complete such gigantic projects that would take us extraordinary manpower and lengths of time?", but it's easy to forget that it took ancient peoples 'extraordinary manpower and lengths of time' to build their works as well - we just don't realize it or gloss over the herculean amount of effort they put into creating their art and architecture. It took over 200 years just to build Notre Dame Cathedral. It took a work force of over 100,000 to build the Great Pyramid. We look at a completed masterpiece (or it's ruins) without quite grasping it took decades or even centuries of a sizeable workforce to complete.

Blackmarketeer
You wrote "how did they complete such gigantic projects that would take us extraordinary manpower and lengths of time?", but it's easy to forget that it took ancient peoples 'extraordinary manpower and lengths of time' to build their works as well - we just don't realize it or gloss over the herculean amount of effort they put into creating their art and architecture. It took over 200 years just to build Notre Dame Cathedral. It took a work force of over 100,000 to build the Great Pyramid. We look at a completed masterpiece (or it's ruins) without quite grasping it took decades or even centuries of a sizeable workforce to complete.


I feel like my having been unclear resulted in meaning being lost in interpretation, sorry. I certainly didn't mean to take away from how long it took them or the manpower required, to the contrary I think we fail to acknowledge that ancient construction sites were often manned by every able-bodied person in the area - as well as the fact that some cites took more than one lifetime, which is uncommon of modern architecture... most architects today care a lot about being able to see the finished product.

Actually one of my core ideas was the fact that they put forward AT LEAST the same effort we do today - and perhaps more.

we'll figure it all out...probably happen here at ATS...

the more pieces of the puzzle you have, the more you find
edit on Thupm3b20143America/Chicago51 by Danbones because: (no reason given)

eta
thats how they shot the sun the moon and the stars and lined up and leveled thier buildings
edit on Thupm3b20143America/Chicago04 by Danbones because: (no reason given)

Danbones
well now, we know a little more about it...i did a thread about ancient harbors and a few people said they couldnt exist because they would all be silted up by now..
then i checked and found out siltration rates are 15 to 40 cm per 1000 years...thats inches per 1000 years


On a flat ocean floor.

Lower portions will, of course, fill in when sediment is washed over them.