Associated Press
THESSALONIKI, GREECE – A Greek archaeologist says she has discovered 20 new burials near Macedonia's ancient capital in northern Greece, and some could tentatively be associated with the early Macedonian kings.

Excavator Angeliki Kottaridi says two of the poorly preserved graves excavated in a cemetery between 2012-2013 "might perhaps be linked" with Alexander I and his son, Perdiccas II.

Both reigned in the 5th century B.C., a century before the most famous ancient Macedonian king, Alexander III the Great.

In a statement Thursday, Kottaridi said the graves at Vergina — believed to be ancient Aegae — were looted and largely dismantled in antiquity. Surviving finds included vases and a sword.

A rich burial excavated decades ago at Vergina has been linked with Phillip II, father of Alexander the Great, although many experts disagree.


Not much else about. I thought I'd pop back in and post this. Another interesting find. I'll post more as more becomes available. Always cool when there is another find of this sort and from the period in question. 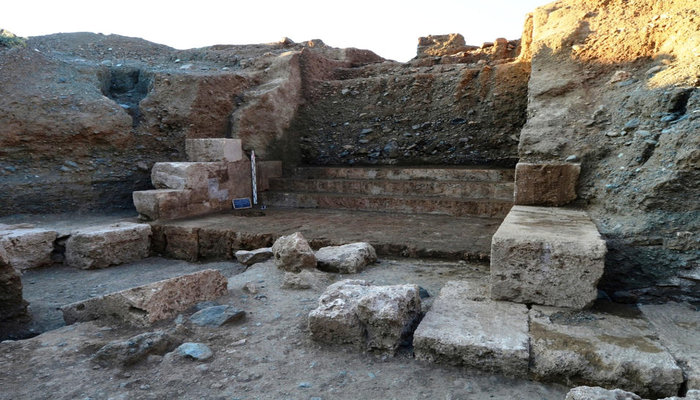 The Temenid burial cluster was found in one corner of the Aegae cemetery. Although looted and partially destroyed, the monuments are impressive evidence of funerary architecture and include portraits of the royal family.

Three of the royal tombs are cists and two are Macedonian. According to the excavator and director of the 17th Ephorate of Prehistoric and Classical Antiquities, Angeliki Kottaridi, one tomb is particularly important, as it shows a large underground room with white walls decorated with painted garlands, fronds, flowers and ivy leaves.

Among the finds were impressive ceramic funerary objects which date back to 420/410 BC and an iron sword believed to belong to King Perdiccas II (454-413 BC), who had fought hard during the Peloponnesian war to keep his kingdom independent.

Another Macedonian tomb with Doric columns was discovered, next to the Ionic tomb excavated in 1987. Its facade is similar to the tomb of Alexander IV, son of Alexander the Great and Roxanne.

Archaeologists are linking the tombs with the Temenid dynasty, the kings of Macedonia, because of their size and shape and the impressive funerary objects found in them. Moreover, one of the graves may have belonged to Cassander himself or to one of his sons, who were also members of Temenid dynasty.

The new findings were presented by Mrs. Kottaridi on March 13, during the 27th meeting covering Archaeological Works in Macedonia and Thrace.