synopsis for those who have connection / bandwidth blocks on y-tube:

" the vid quite succinctly makes the argument that people who demand that their religion " be respected " hold creeds and dogmas that are mutually exclusive to other religions and condem , threaten or demean all other adherents , [ essentially boiling down to ` my way or the highway - or worse ]- where as true respect must be mutual further many dogmas from religions demanding "respect " cast sections of society as second class - or disposable - what happened to respect ? "

so want respect ? why should I respect you if you will not reciprocate the favour ?

ignorant_ape
if you disagree - please give reasons , not dogmas

synopsis for those who have connection / bandwidth blocks on y-tube:

" the vid quite succinctly makes the argument that people who demand that their religion " be respected " hold creeds and dogmas that are mutually exclusive to other religions and condem , threaten or demean all other adherents , [ essentially boiling down to ` my way or the highway - or worse ]- where as true respect must be mutual further many dogmas from religions demanding "respect " cast sections of society as second class - or disposable - what happened to respect ? "

so want respect ? why should I respect you if you will not reciprocate the favour ?


It can be best said, if you are not part of the solution then you are part of the problem.
"why should I respect you if you will not reciprocate the favour"
If you don't appreciate someone just don't associate with them. It is not productive to put up walls because people are slower learners than others so this attitude is kind of a trap to get stuck in. Respect is not something that can be handed out like candy. You either live by it or make excuses.

posted on Mar, 13 2014 @ 04:52 AM
link
the cross in my av , which Creighton Miller has discovered the real use of is the key to the death of the monothistic abrahamistic religions
www.viewzone.com...

our lord amen was menes the first pharoah of the united upper and lower egypt
archive.org...
a lot of people have died on that cross
jesus never existed and was not one of them

think of the people that have died and who had their murders justified by false religion
i respect that there is no forgiveness for murder in that degree...and for what
land money power...and pedophile priests..no forgiveness in heaven if there is no heaven

if ones "religion" actually works.. it's a bit like an electrician who happens to be taking a lunchbreak
along comes some punk kid with a lightbulb and bunch of wires that doesn't actually do anything
meanwhile this kid is making a lot of noise and drawing a crowd..

..if you're that watching electrician, the possibilities are near endless

posted on Mar, 13 2014 @ 05:07 AM
link
Tough to argue against those points.
The paradox of the human condition seems to be a requirement of needing some sort of outside control, be it religion or government to give us a code of conduct in our daily affairs with others.
I can't stand those coexist bumper stickers for some reason.

posted on Mar, 13 2014 @ 05:10 AM
link
Completely agree because the Abrahamic faiths have ZERO respect for anyone else.
Women, gays non-believers, free thinking, logic and reason and many more are all attacked, chastized, subjagated and ostracized by these religions.
Their archaic, patriarchal ramblings have no place in a modern, intelligent, tolerant society.

Respect works both way and organized religion is the single most bigoted thing on the planet
Spiritualism and a personal relationship with god and gnosis are what it is about, that is where it is at.
edit on 13-3-2014 by stargatetravels because: clarity

ets
reminds me of the movie "I come in peace " with Dolph Lundgren..
the alien keeps saying that line just before he jams this big spike into peoples skulls to suck out the brain candy
now there is a religion that demands respect
edit on Thuam3b20143America/Chicago04 by Danbones because: (no reason given)

posted on Mar, 13 2014 @ 06:09 AM
link
I cannot respect your religion because I don't believe it is true, in fact I believe that it is an outright lie and harmful to you and its followers. However I will always respect you and your intellect. I will not demean you for believing what you believe, nor do I even feel like I should. I will not discuss your religious beliefs in a flippant or derogatory way and will approach any such discussion with an open mind and attitude of "what can I learn from this". What would you rather, that I respect your religion or respect you?

To ask me to "respect your religion" is to ask me to accept that your beliefs are as valid as mine, even though they may be diametrically opposed. My beliefs do not allow me to believe that two opposing beliefs are equally valid or of equal value. You may or may not disagree with my belief, that does not lessen your value in my eyes. Perhaps we could have a discussion about it. That would be nice, we might learn something from each other, in time even change what we believe.

Having said the above, I have no idea what your religion is, it might be the same as mine, I am just making a point. 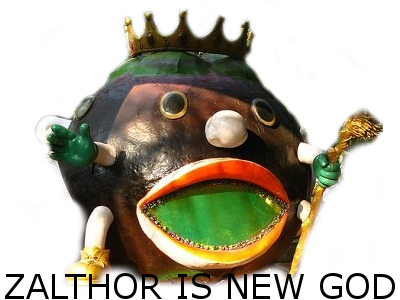 posted on Mar, 13 2014 @ 06:12 AM
link
Haven't watched the vid, but its so very true that "demanding respect" is a self-defeating notion. I can earn respect. I can give respect. But when I start demanding respect, something is amiss. Regardless of topic...religion is just one of many topics in which this applies.


I think the video brings up some good arguments and discussion topics, but has little other value. For a start, it does not make clear which religion we ought to be respecting, since at no time is the religious belief held by the author of the video, mentioned by name.

If what this actually is, is some sort of atheism awareness video, then I have to protest. Atheism is not a religion. It is an absence of it, specifically speaking. There is no faith, there is no mythology in atheism. It has no ritual, positive or negative, and no message to impart, no teaching to insert. I can respect that some people choose to ignore religion, choose to avoid faiths, beliefs, and ideologies based in them. God knows there have been incidents in history which make having a belief look like a part of the problem, but to call an absence of faith a religion is to speak from ones colon.

I heard that atheism will shortly have an actual church, and I protest once again, since the fact is that atheism has no need of such a thing. And that is not just my own opinion, as a Christian, but the opinion of most of the atheists I know, some of whom cannot stomach religions preaching about looking after the needy, while maintaining vast, and largely pointless buildings which serve no legitimate purpose other than as status symbols for the organisations which have hijacked ancient beliefs for their own, materialistic purposes.

I do not believe that Christianity, for example, ought to have Church buildings, because Christ broke bread with his followers in their homes, and modern believers ought to do the same. With that in mind, atheism has no need of a palace in which to seat it's power, since it is not a religion in and of itself, and so has EVEN LESS of a need for such things!

The worst thing about religions is not the people who believe in their teachings, but the things done by vast numbers of people, in concert, in the name of their chosen gods, usually after the words of their particular holy text have been edited, or twisted, to support some horrific plot or scheme, by the leaders of the organisation which professes (falsely, more often than not) to represent the deity of choice. Leave these things aside, and people left to their own devices' unguided, absent cults of personality and so on, would not be such horrific jerks about everything.

Do not get me wrong, I respect real atheism. I respect it, because the people I have met who hold to it, have been kind, honest, decent, loving, and respectful toward all persons. They are in short, good people. I respect them because their reasons for avoiding faith are the same as my reasons for avoiding organised versions of my own religion. I do not go to church, because I believe that faith is about the every day, and that no centralised power has the right to build or maintain purpose built structures in the name of God, rather than using ALL donations to house the poor, heal the sick, and defend the weak. In this, we have much in common, myself, and atheists. But no atheist worth a damn would call their manner of going about their business, a religion.


it all depends on what you mean by "respect".....I really don't care what your religion is, believe and worship whomever, and however, you feel like. it's when it interferes with the life of others, that you are going to get a fight.

I see a lot of people showing no respect for others, but demanding people respect them.....seems a bit hypocritical to me.........

If this is how some act towards others who might have a chosen faith, its no wonder they dismiss you.....

I know a lot of people, from many different religions..........and I have to say NONE of them fit the bill you guys have labeled SO MANY people with.........

IF thats the case, I have to think that its a great possibility that the MAJORITY of the people in different religions dont act like so many seem to like to make them out to be.......

And its just the trouble makers and intolerant fools........that are getting the attention......

Remember tolerance goes both ways, atheists, agnostics and other people dont have a monopoly on that......regardless of how justified you may want to seem.........

And lets throw out the ignorance as well here........stop blaming religions and start blaming the actual people.........

Me.... STFU YOU BUNCH OF NOISY TWERPS, my voices are telling me to watch the simpsons. Boobs. So what. Get lost and get me a coffee. I hate you because you're smelly. and now I wanna sleep so GO AWAY.


so want respect ? why should I respect you if you will not reciprocate the favour ?

If replying straight to the OP post and not reading the thread yet...I have a question based on this.

Is respect for others in life given for their benefit, or for yours? Do you respect someone's belief because it makes them feel better and your thinking is to their self image and esteem...or is respect shown to others for the fact it's the decent thing to do and it makes us all better people, in our own lives, to extend that?

After all..respect is free to give and easy to spread. Nothing lost in the effort, IMO.


I dunno but you just made me wet my long skinny jeans.

If that is a good thing, ALL HAIL ZALTHOR !! Oo