He seems to *suggest* that people need to be better at their budgets (ironic huh? especially for somebody that has come to be known as the biggest binge spender politician of all time).

He also seems to be "targeting" low income people?

But maybe he has a point?

Does anybody see themselves as a "guilty" party? If so, how do you feel about Obama "telling" you this?

This is a few days old, but it’s amusing nonetheless. Barack Obama appeared in a town hall for Spanish-language media on March 6th to discuss ObamaCare and promote enrollments, and got challenged by a viewer on the economics of it for low-income Americans who are now forced to buy comprehensive health insurance. On a $36,000 annual income, the requirement to buy the broad policy rather than something a little more economical — say, hospitalization coverage combined with an HSA, a strategy which is now all but illegal — makes it impossible to comply. Pshaw, Obama replied. Why, all those low-income folks need to do is stop spending money on luxuries like cable television and cell phones!


This also seems to "confirm" that health insurance rates are much higher than expected (and promised).


Guess he can stop passing out Obamaphones to those who haven't signed up yet....yeah that would work, huh....


Isn't it supposed to be the "affordable healthcare act"?

Sheesh, if this is affordable in his opinion I'd hate to see what isn't!

Dianec
+3 more
posted on Mar, 12 2014 @ 10:50 PM
link
From a legal perspective he needs to be careful. Someone is going to cancel their 20.00 per month emergency cell phone and end up in trouble because they couldn't call home for help in an emergency - ending up dead or disabled. In America - you can sue for anything so I wouldn't put it past someone - "she had one but Obama said I should stop paying for such things". That would be another McDonald's coffee thing but he wants to be the authority figure - he may just get what he asks for in time. Stick to the important stuff and leave personal home budgeting to the citizens.


His comments aren't really aimed at the poor so much as the lowest of the middle class. The poor can get Medicaid and obamaphones so they have that little bit extra for cable. It's the working upper poor and lower middle who get screwed, again.

signalfire
+8 more
posted on Mar, 12 2014 @ 10:55 PM
link
Maybe he's got a point. Everyone I see is looking down at a fancy Smart phone, and seems to have the money to buy cable tv plus the extra packages. Many don't seem to be cutting back on the miles they drive or what kind of car they drive. The restaurants are still full of people ordering steak, and I still see it sold in the stores, so someone is buying it.

And how many people now think it's normal to have a cell phone on every person in the household that's over four years old?

What's all that cost? I'm honestly asking, because I don't have any of that or never did. I especially am not going to pay for cable tv when all they do is either lie to me, or try to convince me to be an active member of the sickest, most consumer oriented society in the history of the planet.

It's one thing to not want anything to do with some POS bill barfed out by people who wanted to 'pass it so we can know what's in it'; it's another thing to say you can't afford to have health insurance because you can't cut back anywhere in your budget.

He said "cut our spending and prioritize"...from someone who submitted no annual budget for 5 years as POTUS?

I don't see how this is targeting the poor, they get subsidies on their health insurance. Someone making 36,000 a year would be considered middle class, 300 month for three people is a very fair price. I pay half that, make less, and thats with my employers contribution. I would have no problem paying that amount if I was pulling in what the person asking the question was, not to mention, Obama probably is right about budgeting. If you pay for a bunch of status symbols instead of keeping up with your health your priorities are out of order. I wonder how these people would fare if health care was taken directly out of their paychecks or in other taxes like in first world countries with universal health care. I guess they would all be bankrupt.

I hope everyone loves "the change we can believe in".

Next he will be telling us that milk and bread are a luxury and all we need to survive is a bowl of rice and a healthy glass of flouridated water. After all the Chinese have been doing it for centuries, without the flouride of course.

American politics is a friggin joke.

Well he's sounding like the bootstraps Republicans he used to deride. Let's see how his constituency takes it


Your right - a lot of people have some high end phone and/or cable yet live off of welfare or can't afford to feed their family so head to food banks and the like. I certainly don't get it but this is not all people. Not even close. Most of the people I know have older simpler phones and still can't afford 330.00 a month in insurance. They do not live off of the government but live paycheck to paycheck. He is generalizing quite a lot in his statement. I would like to see him squeeze into some of the budgets I'm aware of. There is no room and these people don't have cable nor fancy phones. First hand knowledge. He has effectively made living off of the government more appealing than working for a living and I can prove it. Again - one spoonful at a time.

Dianec
That would be another McDonald's coffee thing

You are misinformed. The lady who sued for the 'McDonald's coffee thing' suffered THIRD DEGREE BURNS. That means right down past skin to the underlying tissue. The coffee was almost boiling hot, 180-190 degrees. You can't drink it if it's over 120 or so.

She required multiple skin grafts and was permanently disfigured by the burns, and further attacked by all the wrong-thinking morons who thought she only sued because she could, and for no legitimate reason. This after the doctors didn't think she would live...

Her lawsuit led the way for closer controls on at what temp the coffee is held in restaurants and may have saved many more people from what she suffered. She's a hero and a victim.


Guess that was a lie too. No?

posted on Mar, 12 2014 @ 11:18 PM
link
He might have a point. But only if all of congress and the federal government give up their cable tv and cell phones, to pay for a deduction in their own paychecks, to fund obamacare. Then I might consider it.

Though dropping cable tv means people will no longer be subjected to that brain-fungus known as reality tv, and be forced to leave their homes and actually face reality, as well as get some interaction with human beings. Which might in turn cause them to realize just how thin the illusion hangs, and decide the current way of doing things is completely unacceptable. And thus decide to riot and change things. Which means total destabilization of everything.

I wonder, what would happen if, let's say, all broadcasting in the world was knocked out by some phenomenon, so that while we still had electrical power, plumbing, infrastructure, ect, the fastest and most sophisticated long distance communication device was the telegraph, and the newspaper is now the only source of news. You could still watch like dvds, you would just not have any broadcasted tv or internet. What do you think would happen to our current society, still functional in the technical sense, just not with anything but primitive communications. We would no longer have tv to watch, or the internet to play on. No phones, whether land line or cellular, are operational, except to play mini games on. What would our current society develop into, without the endless electronic propaganda like tv, radio, and internet ads and programs.

I'm willing to bet there would be drastic changes in attitudes, values, and such. People would be forced to interact face to face much more. Body language would become more important. I also believe the current system would not survive, because it relies on the constant bombardment of impersonal propoganda through various media. A war for minds. Without it, people will once again become more aware of reality.

So, maybe ditching the cell phones and cable tv will be better for everyone. Or maybe people are so far gone they will simply go insane wehen deprived of the mind drug, and overthrow the system in blind panic and withdrawals, no longer able to cope with reality. Either way, a win.

Snarl
+8 more
posted on Mar, 12 2014 @ 11:20 PM
link
Having to pay for health insurance 'the old way' was bad enough. This way is stoopit. My son and I just spoke, and he was pretty disenchanted at the $1000 bill he got in the mail. Yep ... He hasn't gotten to the point where he's met the up-front cost and every penny is coming straight from his pocket for now.

When are people going to realize that it's not about insurance ... the healthcare industry in the US is just a rip-off. Ever wonder why a country 'going commie' used to kill all the doctors and lawyers at the outset?

Speaking on a town hall style "meeting", Obama mentions that people seem to place healthcare at a low priority until they get sick and then it's a bigger problem.

Why do you think that is?
Maybe they still believed all the B S. 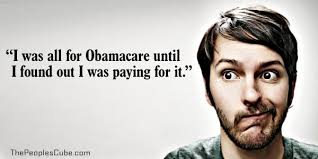 My Friend Their Coming for you! 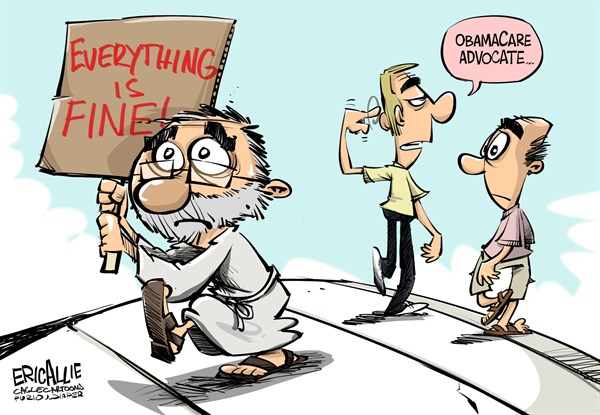 
Pshaw, Obama replied. Why, all those low-income folks need to do is stop spending money on luxuries like cable television and cell phones!


The Hell? I'll just blind myself with a hot poker and jab darning needles in my ears.

I'll be completely blind and deaf so I can't go anywhere. Then I won't need any cable, cell or Obamacare.
edit on 12-3-2014 by intrptr because: spelling