And Up from the Deep Came a Bubbling... 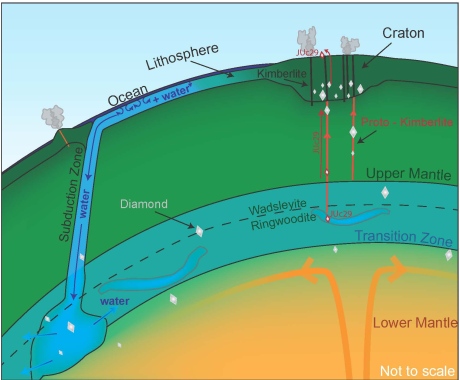 A dirty, $10 diamond with a prize inside has helped reveal that there are vast quantities of water stored deep inside the Earth.

The diamond formed in the "transition zone" around 410 to 660 kilometres below our planet's surface. Analysis of a mineral grain trapped inside it suggests that it came from surroundings that were about one per cent water, report researchers led by University of Alberta geochemist Graham Pearson. They published their findings online in the journal Naturetoday.

If the sample is representative of that part of the deep Earth, the amount of water there could be "about the same as the mass of all the world’s oceans combined," wrote Hans Keppler, a geophysicist at the University of Bayreuth in Germany, in an analysis article.


I find this very interesting… that there is so much water within the ‘transition zone’ deep within the earth. I also find the thought rather disconcerting. That the water is there and can flow like the tides means that there could be large floods under certain conditions. I just hope it stays put for the most part. The rains and melting glaciers is enough to worry about, imho.

What are your thoughts on this new discovery?


There is another story around from a month or so ago that researchers found pockets of water deep under the crust of the earth that was fresh water . In the piece that may be from the same source you have they stated that there was more fresh water down there them what we have on the surface .Kind of reminds me of the Genesis flood story of the fountains of the great deep being opened .The diamonds in this story might explain the Kimberlite pipes where diamonds are found .I can think of the one in Africa and the one we have up in the arctic ...interesting story eh

edit ..it would mean that diamonds are not created they way we were told .I think that what we call fossil fuels (oil) is not what they had told us either .
edit on 12-3-2014 by the2ofusr1 because: (no reason given)

This is news, and I am surprised they are just now discovering this.
Let's just hope T.Boone Pickens doesn't try an buy it all up!


"If that weren't replenished, then the interior of the earth would just become a dry desert," he said. "So it's part of what we call the water cycle."


Makes me think if we start harvesting this water we should be careful not to remove enough so that it's function becomes impaired. Dry plates do not sound good.
I am curious of the quality too and if any of it has been tainted? What kind of micro organisms may reside there?
A nice find indeed, for all of us!


My thoughts exactly... the old biblical notion of opening the 'fountains of the deep' suddenly makes more sense, doesn't it? It also might be another explanation for the disappearance of some land bridges.


It puts me in mind of the novel Flood by Stephen Baxter:

Published in 2008, Flood is the work of hard science fiction by English author Stephen Baxter. It describes a near future world where deep submarine seismic activity leads to seabed fragmentation, and the opening of deep subterranean reservoirs of water. Human civilisation is almost destroyed by the rising inundation, which covers Mount Everest in 2052. Baxter issued a sequel to this work, entitled Ark, in 2009.

My thoughts are that this deep source water lends credence to the Expanding Earth hypothesis as it demonstrates that there are processes occurring deep within the earth of which we are completely unaware.

Think I'll do a bit more research and see if the deep source water has isotopic ratios similar to the earth's oceans, because scientists have no idea where all the water came from. There are theories of comet or asteroid bombardment, but I think the water all came from within the earth from the same processes as set forth in this paper:

Geodynamic phenomena are attributed to Excess Mass Stress (EMS). The basic idea is that the Earth expands and not due to a heat but to a stress engine. Below the depth of about 100 km in the Earth’s interior, electromagnetic and nuclear forces, not heat and gravity, are considered to dominate. Excess Mass (EM) is the product of transformation of cold plasma (electrons, protons and positive ions) into bulk matter, within the outer core, through electromagnetic confinement, resonance, laser clustering, shockwaves, and controlled nuclear fusions.


Wow, now there's a novel that is going to be on my required reading list. In the description, it says that the idea for the story is based on the idea that there are vast oceans of water deep within the earth. The science has just caught up with him.

Thank you for that.

posted on Mar, 12 2014 @ 02:41 PM
link
I could be wrong.. but it appears in the upcoming movie Noah that the water is shooting straight up from the ground.


No... you're not wrong. Watch until the very end of this trailer...


I don't see why it should not be there... after all, Mars does indicate water was plentiful there. That and water being prevalent throughout the known universe.

posted on Mar, 13 2014 @ 01:24 AM
link
There is a theory that accounts for the amount of water to create a worldwide flood.
Hydorplate Theory proposed by Walt Brown

The Hydroplate theory asserts that before the Flood, approximately 50% of the water in present oceans was contained in underground reservoirs, a huge underground body of water about 10miles under the surface. One huge supercontinent would have covered the surface of the Earth, including some small mountains and small oceans


1) A shell of granite surrounded the Earth, resting on a layer of water under great pressure. Below the water was besalt rock (or whatever is pre-melted oceanic rock).

3) This rupture phase widened to about 800 miles width shooting up rocks, sediments and water (some into space, giving birth to comets, a whole other topic)

4) The removed crust created a vacuum to be filled. This caused the Mantle to move to fill the vacuum. This movement began in the Atlantic.

6) This sucking down of the Pacific caused the Pacific plate to be sucked into the Earth (already detached along the mid-oceanic ridge). Also created the trenches, extensive volcanic activity and Ring of Fire.

7) As the Atlantic rose the plates started to slide away from the rising ridge in both directions in the Atlantic.

8) As the moving plates slowed and piled up on themselves, they thickened and created the present continents which are about 3 times as thick as the original granite shell

It was also discussed on a thread here on ATS back in 2007. Link

posted on Mar, 13 2014 @ 01:36 AM
link
Maybe this is where you get petroleum from. Suck up methane clathrates into subduction zones, add water, heat, pressure, and time in the transition and voila! Crude oil.

That makes the toilet my new barometer

When i dared to double post i had 5 people complaining... quite interesting really hmmmmm


Pretty nice discovery, it does hold up evidence that there could be large untapped reservoirs of water under the crust of Mars.

posted on Mar, 13 2014 @ 05:05 PM
link
I'd say the Earth's core is hot, not because of tidal forces with the moon (although it contributes some), but a much much bigger and ongoing version of the Oklo natural reactor. Water makes a good moderator to help keep things going. It's why helium and radioactive gases seep out in some places. (And at times more than what slow decay should account for.) Convection currents in the molten materials containing metals keep the magnetic field going. Our planet has a pretty live core compared to other terrestrial types in the system.

Mainstream science still doesn't say the Earth's core is a fission reactor, but I don't consider that idea anywhere near as far out as the hollow Earth or those oddball "intelligent design" theories. Evidence of water being that deep is something that would help support it.

A recently deciphered 4,000-year-old clay tablet from ancient Mesopotamia — modern-day Iraq — reveals striking new details about the roots of the Old Testament tale of Noah. It tells a similar story, complete with detailed instructions for building a giant round vessel known as a coracle — as well as the key instruction that animals should enter “two by two.”
The tablet went on display in the British Museum on Friday, and soon engineers will follow the ancient instructions to see whether the vessel could possibly have sailed.
It's the subject of a new book, “The Ark Before Noah,” by Irving Finkel, the museum's assistant keeper of the Middle East and the man who translated the tablet.

well if a musket ball ever starts the next flood here is what you do...

That makes the toilet my new barometer


i really hope the next biblical flood doesn't happen that way...

That's in the same direction and out beyond where they are fracturing rock to deep inject combined millions of gallons of toxic goop...right?