posted on Mar, 12 2014 @ 03:37 AM
link
Just cannot believe what I just read. apparently the two blondies were invited to join the pilot of the missing plane on a previous flight in the cockpit to chat while the pilots were smoking inside. First these two girls are totally retarded for not having mention what went on during tht flight to the authorities right after it landed, it might have saved a lot of lives. Secondly, just wow...makes me wonder what goes on in the cockpit next time im 35 000 ft in the air with my life in the hands of people I do not even know. On top of it, the airline had been warned about a potential for critical fault on the plane. 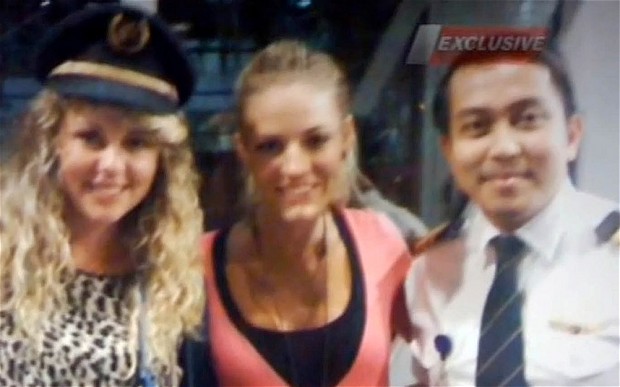 So basicaly any "hot" western blondy would have had access to the cockpit on that plane...


One of the pilots of the missing Malaysia Airlines flight liked to entertain female passengers in the cockpit, it emerged on Tuesday, as it was disclosed that US authorities had only recently warned of the potential for a critical fault on Boeing 777 aircraft.

posted on Mar, 12 2014 @ 03:46 AM
link
Seems like a desperate attempt to discredit the pilot
dig up dirt on someone to appeal to the people who wouldnt otherwise be interested in an aviation story.

so he liked women and smoking and was proud of his status as airline pilot ,The point of this story is what? to put the blame on a possibly dead man.

And then you insinuate that "any hot blonde had access to the cockpit" .wow

posted on Mar, 12 2014 @ 03:50 AM
link
I think you will find this has been common place since airplanes went commercial.

It never made planes disappear before.

posted on Mar, 12 2014 @ 03:51 AM
link
We can speculate all we want with this little tit bit of info.
Is it possible for a women's high heel getting stuck in the transponder causing it to turn off..
Or maybe a butt cheek jamming the steering thing' y, causing the plane to veer of course.


Are you serious??? Do you not realize what it implies to let passangers in a cockpit at 35 000 ft in the sky? and smoking on top of it!

For the discriditation part, it could be that aswell. Funny thing is that the picture seems to have been taken in the airport and not in the cockpit. But regardless, to let passengers in the cockpit is copletely against regulations and safety of everyone onboard. Someone just posted a thread about terrorists with bombs in their shoes to blow up the cockpit doors of planes, hell, on that plane the door must have been unlocked while there was a party inside.
edit on 32014Wednesdayam331Wed, 12 Mar 2014 03:53:47 -0500America/Chicagov53 by Golantrevize because: (no reason given)


When i was young ,it was common place to visit the cockpit ,and smoking on a plane was common ,They even had ashtrays in the armrests.He didnt let them take control ,disconnect the autopilot and enter a stall . And did you say that the photo was taken in the airport not the cockpit? show me a photo with the blondes joining the mile high club with the crew whilst flying and then there may be an issue

Are you serious??? Do you not realize what it implies to let passangers in a cockpit at 35 000 ft in the sky? and smoking on top of it!

I'm not sure if you're being sarcastic or not... But smoking is not going to down a plane. In fact smoking used to be pretty popular in all airplanes. I still remember the ashtrays. Although you don't see many planes today that still have that lingering history in them, some do while you aren't allowed to smoke anymore, you can still see when it once was normal.

As far as letting passengers in the cockpit, definitely leaving the door open would be a security issue if someone wanted to take control over the flight. So you have that...

So basicaly any "hot" western blondy would have had access to the cockpit on that plane...

Sounds about right to me. Any hot western blondy would have access to my cockpit too if I were a pilot.....wait, I don't think that came out the way I intended it to.

Seriously though, this kind of behaviour is not surprising but also unprofessional.
edit on 09/15/2013 by silverking because: (no reason given)


What century where you born in ?


Try and get some aeronautics culture before you make a (propaganda) thread and make yourself look very ignorant. Up to year 2000 or so we all were allowed to smoke in planes, and before bush et al created 9/11 you could ask in any flight to be shown the cockpit, I have done it numerous times.


Ask the 100 dead on Varig flight 820 if im sarcastic about smmoking in a plane.


Ask the 100 dead on Varig flight 820 if im sarcastic about smmoking in a plane.


And thats why they disallowed smoking in lavatories afterwards, as said, try and become less ignorant before making any statements.

Obviously there is no answer but if they still ring, then they're still on/working.

Visiting cockpits used to be pretty standard... If there was a kid moaning about being bored, sometimes the stewardesses would ask the pilot if the kid could watch.

I think a bored child could be far more damaging than two adult women.
edit on 12-3-2014 by iRoyalty because: (no reason given)


I don't see how making the statement that you have to be a complete retard to smoke in a plane makes me ignorent whe you just confirmed that it is disallowed and dangerous. What are you? Tobacco representative or something?


I don't see how making the statement that you have to be a complete retard to smoke in a plane makes me ignorent whe you just confirmed that it is disallowed and dangerous. What are you? Tobacco representative or something?


No no, you dont have to be a complete retard to smoke on a plane, never said that. Perhaps you think more people are like you but no. Im pointing out your ignorance on the subject, not promoting tobacco...