A rampaging, 22-pound Oregon house cat with a 'history of violence' attacked a baby and trapped a family and their dog in a bedroom at their Portland home before being captured by police.
On Sunday, the cat, a black-and-white Himalayan called Lux, scratched seven-month-old Jesse in the face, according to Portland Police Bureau spokesman Sergeant Pete Simpson.
The baby's father, Lee Palmer, kicked the cat in the backside, which sent it into a rage, and Palmer, his partner Teresa Barker and their baby, along with the dog, retreated into a bedroom in fear.

How do you let a CAT "terrorize" you. If this cat has such a "violent" history then WHY keep it around a baby or why keep it at all?

The guy kicked the cat and thought it wouldn't be pissed? There are other ways to handle a cat that don't involve KICKING it! I wouldn't be surprised if this guy has been violent towards this cat before. The family says the cat is "well loved" and that is why it is still there. Um yea sure it is! Cats tend to act out for a reason! I bet the cat is not well loved like they claim. Poor kitty.

I honestly find this funny that a man let a cat "terrorize" him to where he needed to call 911. They shouldn't be allowed to keep the cat yet they are. So what will happen next when the cat "terrorizes" them again? Seriously these people are stupid. They say the cat has a tendency to be violent yet they worry about their child. Ok then GET RID of the cat! If either of my animals were ever violent towards my son, they would be given one chance to change and if not they'd be re-homed. Both my cat and dog love my son and the cat could honestly careless about him unless he is eating then she wants what he is having. lol

I find this story funny to be honest. Sure that might make me mean and heartless but come on it's a cat! It is obviously acting out for a reason! My sisters cat is MEAN as nails and it's because of how they treated it when it was little and even know. They were mean to it so of course the cat IS mean. I don't like walking near that cat because it has a tendency to attack. My sister thinks it's funny but she is an idiot who shouldn't have pets anyways because she doesn't respect them.

I bet this cat has the same issues. This poor cat needs to be re-homed and given to a family that will actually love it and not terrorize it to where it acts out!

Here is the youtube coverage of the local news report of it.


A flipped out cat can be extremely dangerous.

They don't look like much until you are attacked by one. They are really fast and if they want to hurt you, they can and will.

Sorry but I find this whole story silly and if I were that husband I"d be embarrassed to be cornered by a cat to where i had to call 911.

He shouldn't have kicked the cat!

Oh I know how mean cats can be. I've been charged by a couple but the guy asked for it by kicking it. He was a jerk to put it nicely. If the cat is so dangerous it's their own fault for keeping it.
edit on 3/11/2014 by mblahnikluver because: (no reason given)


I too have been attacked by a cat..... It kicked the # out of me....... Seriously.... was a stray in my parents house that somehow got in and when I went in to remove the evil beast it beat the crap out of me.... seriously clawed and bit me everywhere and the bathroom looked like Bates hotel bathroom... evil cats

HAHAHAHA I love the transcript from the video.

Cat's are evil. But I have to wonder what kind of dog this family has. What sort of a dog lets the cat go on a rampage and terrorize the whole family? They probably had a pomeranian or something. A german shepard never would have stood for that crap.

posted on Mar, 11 2014 @ 05:17 PM
link
We have three cats, and the one we have watch the most is our "recovering" feral Missy. She's basically stable in her attitudes and very predictable which is the only reason she's still around. She won't attack although she will strike out if you invade her space and she's nervous. She's also not the most gentle; tends to be mouthy.

But she won't attack. She and our son have figured out how to more or less move around each other over the course of the past three years, and we watch them carefully.

My parents, on the other hand, have a true terror on their hands. His name is Clyde, and he is apparently unpredictable and the only person who can manage him when he gets wound up is my dad. He is huge and pushes 20 lbs. And when he lashes out, he has no concept of gentle. He's been known to just outright go after you if he gets it in his head. Usually, my parents keep him shut up when the grandkids are around.

He got out once when my husband and I were there with our less than year old son, and he got into our room. My husband was worried he'd get our son, and having had several years of vet experience, went to remove him. Clyde got lose from restraint, and took it to my husband. We're not sure whether he actually bit or just clawed, but regardless, my husband left a trail of blood all down the hallway and stairs. His hand and arm looked like raw meat ripped open.

It was 3 am, and we were in the country, so we cleaned him up and didn't go anywhere. The next day, we drove home and just in the course of the 2 1/2 hour drive, the wounds swelled visibly and started streaking. He spent the afternoon in the ER getting treated for cat scratch fever and had to wear a giant splint for the rest of the week and tell people he'd had his @ss kicked by his in-laws' cat. He also had to take several courses of heavy duty anti-biotic in addition to the IV anti-biotics both that day and day after in the follow-up with our regular doc.

Seriously, aggressive cats are no laughing matter, and my husband really hates Clyde.
edit on 11-3-2014 by ketsuko because: (no reason given)


My brother had a cat that was nice as could be, then one day he came home and it attacked him when he came in the door. He had to lock it in the basement until after his wife got home so they could figure out what to do. They never did find out why it went loopy, but it was totally a different animal. I think it ate something that skitzed it's brain out. They had to put the cat down.

Here is a cat that hated the animal control officer that was handling it....
cats and leashes do not mix...lol

posted on Mar, 11 2014 @ 05:20 PM
link
We have a large feral cat population in the area. When i was a kid, and my sister an infant, a feral cat scratched her trying to get out of the van (it must have snuck in the night before while we were unloading groceries). My dad grabbed his shotgun and thinned the population considerably. We lived way out in the country back then.

A couple of years ago they got bad around my house. My oldest son was home, and was headed out to play tennis. A cat jumped him from the roof (i kid you not). He took that cat to task with the tennis racket. In any hand to hand situation, just about anyone on earth could likely win a fight with my oldest. Very effiminate, 5'3" tall, maybe 115 lbs. But give him a tennis racket....and he is a real badass. He won that fight with the cat using an epic forehand shot.


HAHA! omg. I'm actually more laughing, as the reporter was obviously working hard to contain himself.


It depends on why it happened. If there was a cause then you can eliminate it, but if it just got violent out of the blue, then it's going to be hard to eliminate the cause.

posted on Mar, 11 2014 @ 05:28 PM
link
Oh man the 911 call is the greatest!
Beyond great that you can hear the rat in the backround and as stated before the amazing RAAAAAAAAAAR! transcript.

My question is what was the size of the dog and couldn't it have handled the cat for them?
I agree that cats can hurt you, been on the wrong side of a couple, just have a hard time with being trapped in a room because of one.

Funny.
Poor cat though 22 lb not good for a cat that.


It has been my experience with cats and dogs that a dog WILL NOT mess with an angry cat 99% of the time. Usually the cat will turn on the dog and the dog goes running...why?

Because cats are bad asses when they are mad...lol 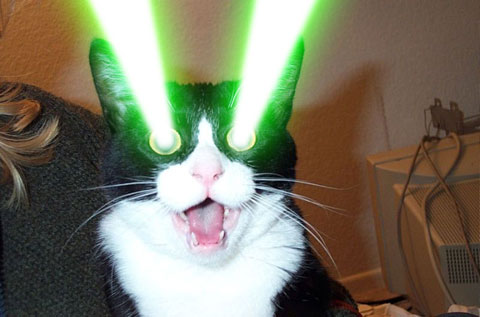 
If you have to call 911 on your cat, you shouldn't own it in the first place.


Well, I would be nervous afterward, especially with the baby in house, to wait for cat whisperer. There was no reporting on the cat being removed, so I assume it is being chalked up to an isolated cat attack. Oh, goodness. But nervous henceforward, yes.

I was half expecting a sinister background tune to the video.
But yes, your cat seems quite the evil feline.


If only I knew how to do that lol I just uploaded that video and it took me an hour of fumbling around lol.