The Mount rushmore of ufology

posted on Mar, 11 2014 @ 02:51 PM
link
What is your Mt rushmore of ufology? There are so many people that have contributed to that field of study.

posted on Mar, 11 2014 @ 03:12 PM
link
Very good question. I'd love to hear other people's opinion on this. My Mount Rushmore consists of the following four individuals:

Charles Hoy Fort (a legend; one of the earliest UFO researchers - researched UFOs even prior to WWII)
Erich von Däniken (wrote Chariot of the Gods and examined outside intervention on ancient human societies)
Stanton Friedman (I consider him to be the leading authority figure on scientific UFO research)
Art Bell (brought the paranormal to millions of homes around the world)

Honorable mentions to:
Robert Charroux (proponent of Ancient Aliens Theory)
Nick Pope (worked on UFOs for UK Ministry of Defence)
Philip J. Corso (wrote a controversial and popular book on Roswell that pretty much set off modern ufology)
Steven Greer (proponent of government openness and disclosure)
Morris Jessup (pioneer of ufology and covered the Philadelphia Experiment)
Bob Lazer (claimed to work at S-4 and provided valuable information about Area 51).
edit on 3/11/2014 by Pistoche because: (no reason given)

posted on Mar, 11 2014 @ 03:23 PM
link
Haha! Yeah. Not all just researchers, but I've gone for Nick Pope, cos he had a job to gain a great angle on the phenomena from the country I'm in, Betty & Barney Hill because, I don't know, when I think of UFO abductions I just think the names Betty and Barney Hill And Stanton Friedman, because he has an Abe Lincoln style beard. Also, extra terrestrials, because it's funny and the US gov will have to try and "cover it up". Let's hope they wash their hands afterwards If you mean which faces would be carved on an edifice dedicated to ufologists, I'd suggest Mike Swords, Jaques Vallee, J Allen Hynek and Jenny Randles.

They've all made me think and they come at ufology from very different angles. Hynek's been much less influential in the way I've thought about the subject and yet he can't be left out when he's been so influential on ufology in general and Vallee and Swords in particular.

For influence, I could toss in Bullard, Sagan, Clark, Moseley, Clarke, Hall and several others, but then we'd be talking about a Mountainrange Rushmore

Probably the best edifice to ufology would be something like Stonehenge - once great and now a collection of fallen megaliths. Or maybe a crime-scene where the perpetrators have left false trails and smudged all the finger-prints. A psychiatrist's couch? Or just a huge Rorschach-type billboard so everyone gets to see their own thoughts reflected?!

P.S. That's a woeful OP JRC. Put a thought in there next time huh?

Kandinsky
Probably the best edifice to ufology would be something like Stonehenge - once great and now a collection of fallen megaliths. Or maybe a crime-scene where the perpetrators have left false trails and smudged all the finger-prints.


Yeah, pretty difficult to come up with a selection of people who have significantly contributed to a field that has essentially gotten exactly nowhere in nearly 70 years. Where we know as much about UFOs now as we did in 1945.

posted on Mar, 11 2014 @ 04:04 PM
link
The following is my opinion as a member participating in this discussion.
Got to put Frank Edwards up there.

But there are so many people out there that just want to sell a brand and don't really care about the truth of UFOs and ETs.


I guess that would depend on how you define legit , or was that sarcasm , if not I suggest you read up on the good Dr .... I use the word good in the loosest possible way

Just a little of what he did. He didn't break the Kenneth Arnold sightings, but Arnold wrote a detailed account of it for Palmer's new Fate Magazine. Palmer went on to publicize the field for 30 years with his writings, publishings, and much more. He organized the first large UFO convention, in 1977, to celebrate Arnold's 30th anniversary of his sightings:

In the first issue of Fate, Palmer published Kenneth Arnold's report of "flying discs." Arnold's sighting marked the beginning of the modern UFO era, and his story propelled the fledgling Fate to national recognition. Through Fate, Palmer was instrumental in popularizing belief in flying saucers. This interest led him to establish the magazine Flying Saucers.

Check out the illustration used on that cover. Not to mention the article about the 20 Million Maniacs (Nathalie Merchant and her crew cut that number down to 10 thousand at some point...) 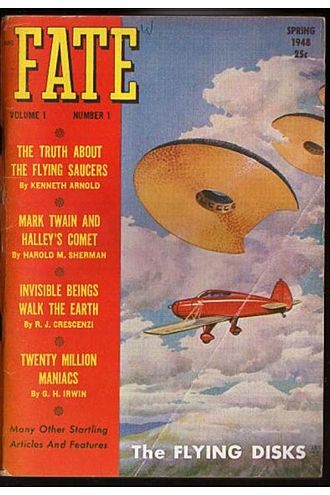 
People are judged on their actions , in Doc Greer's case actions really do speak louder than words.

I am delighted to have been invited by Sir Eric Gairy and the
Grenada Mission to speak to this committee on behalf of many of
my scientific colleagues about the subject of Unidentified
Flying Objects. Many years ago, in conversation with His
Excellency, U Thant, I was informed by him that protocol
demanded that a member nation first bring a subject up in the
General Assembly before any action on that subject could be
initiated.

Now, many years later, one of the smallest nations on the Earth
has courageously introduced the perplexing subject of UFOs to
the General Assembly, and thus made possible this meeting today....

Ufology needs another person like Vallee, in my opinion, if it wishes to pull out of its current downward spiral. Someone like Vallee, educated and intelligent, but not afraid to go against the status quo or challenge long held beliefs. I'm joking, some of the best UFOlogists are bearded old men Chip Friedman's head away and replace it with Hynek's if you want though.

I'd probably have to say...

1) Edgar Mitchell by default as a respectable Astronaut!

2) I like Bill Birnes quote a lot... So he gets his face on the Mount!

3) Steven Greer gets the nod from me... Disclosure Project has had a few hurdles to skip...
But as an overall attempt and with so many high profile/well respected members it's still an astonishing Documentary/Conference to see!
Especially for the newer UFO believers!

4) J.Allen Hynek I guess would stake a claim!


this is my favorite greer video, watch and tell me if you think he's a fake or not. and he makes pretty good money too. somewhere i read he charged 2500 bucks a head for this.

i always say it would have been more believable to have someone run across the field and fall down like they run into it followed by a loud bong sound. notice that no one is to point a laser but him. might point to something that show it's fake.but he says their dangerous.then on the inside tour nobody could film. i wonder why?

then you got his light being which is nothing more than a moth. when he was called on it, he took it down from his web site.
i've heard that he charged 800 to 1000 bucks to even look at that picture when he first put it out.

posted on Mar, 12 2014 @ 08:42 AM
link
My top 3 would be Stanton Friedman, Don Dondieri, and Nick Pope. All three know exactly what they are talking about, as well as highly intelligent.

Whatever you say. Personally I'll take the late real deal journalist Frank Edwards over Greer every day and twice on Sunday, especially if that's your criteria. Greer has done a thousand times more harm than good. Maybe unintentionally. Greer is the Poster Boy for why the subject is ridiculed and marginalized among most 'serious' journalists and members of the scientific community. IMO of course.


I tried to get Friedman's opinion on certain ufo related topics but he like a legit researcher declined giving an opinion about things he knows nothing about. A mark of a real deal researcher.
He would rather say "I don't know" rather than make s---- up to sell a book/DVD/subscription like other "researchers" would do.