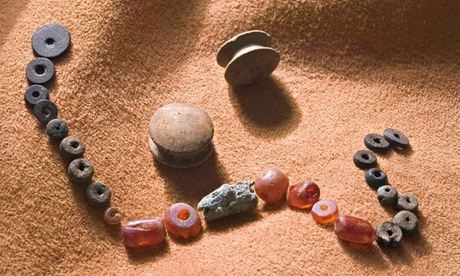 The discovery of her remains is rewriting the history of the bronze age moor. The bundle contained a treasury of unique objects: a tin bead and 34 tin studs, which are the earliest evidence of metal-working in the south-west; textiles, including a unique nettle fibre belt with a leather fringe; jewellery, including amber from the Baltic and shale from Whitby; and wooden ear studs, which are the earliest examples of wood turning ever found in Britain.

Example of an ancient lathe: 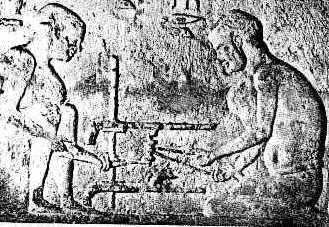 The Egyptian lathe is based on a stone carving which may be the earliest pictoral representation of a lathe. Artifacts as early as the 7th century B.C. have been found which appear to have marks consistant with having been turned.

For those that would be interested here is a link to a site on early wood lathes.


you are my new hero AD
sandf


Mystery of the Moor, was first intended only for local broadcast, but as the scale of the find became clear, it will now be shown nationally on BBC2 on 9 March.


This passed me by but I shall give it a watch on BBC iplayer later , the finds look stunning.

Here's a trailer for the documentary showing the artifacts.
www.bbc.co.uk...

And an in depth look at the Whitehorse Hill burial.
www.dartmoor-npa.gov.uk...

posted on Mar, 11 2014 @ 01:36 PM
link
hmmm...locally they did the beads by hand at least back to 1000 ad roughly so i would guess the egyptian lathe was in use in egypt after the main contacts we suspect happened around the time of king tut..

posted on Mar, 11 2014 @ 02:14 PM
link
How did they wear those wooden ear studs? They seem so big! Was it maybe by cutting a hole in the ear lobe and inserting the studs in the hole? Like they do in some African regions?

How sweet to read that she was buried with her jewellery carefully wrapped in fur.......our human spirit doesn't seem to have changed much.......our humanity.


Here's a link to the documentary on iplayer , it's available for a couple of more days and is only 30 min long , it shows the craftsmanship that went into the making of the jewelry by recreating the items using the methods it's believed the original craftsmen used.
The tin studded bracelet is particularly impressive and the documentary shows just how much work must have gone into creating it , at the end of the show they use a model to show how the ear studs and jewelry would have looked when worn at the time.
The wooden ear studs were worn as they are today , I have a couple of friends with similar studs in their ears.


Thank you! I'll watch it at the weekend!!
And yes, many people wear them nowadays but looking at the pic, they seem really big! lol