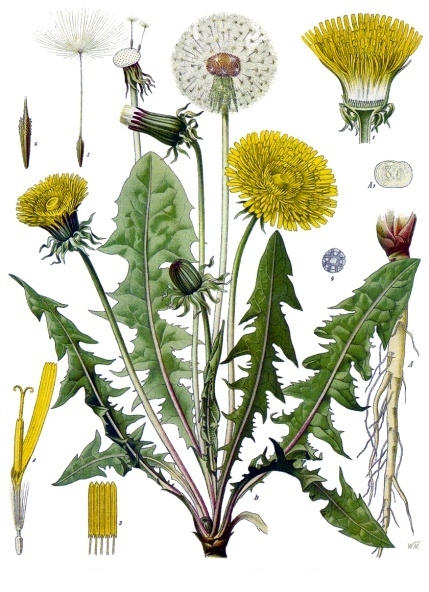 Being one of the most common weeds, Dandelion (of the family Asteraceae, formerly Compositae) is found in temperate climates all over the globe, and is one that "everyone knows" and one of the first flowers a child learns to love. A love that unfortunately often turns into hate as we grow older and a perfect lawn is more important than nutricious plants. However, dandelion (from Old French, dent-de-lion, "tooth of lion") is certainly not useless, whether as medicine or food. It also contains yellow and green pigments that can be used in dyeing fabrics.

Like many yellow herbs, it's rich in vitamin-C, and also good for the liver and helps in cases of jaundice (esp. the roots). From Witchipedia (link below): "For liver issues, a tincture from the flower tops and/or a broth of the leaves is said to bring relief."

It was the first medicinal plant I learned about in life, since it was said to cure warts (others said it was actually the other way around) and my cousin had his hands full of warts which is a long story of search for healing, ending by a hole in a mountainside the size of a cabbage head called 'Vortekjelda', or "The Wart Source" (history going back a thousand years atleast) where natural chemicals gathers in a soup that is very effective against all kinds of warts (also the ones 'down there'), in mere days his hands were clean of warts. Another trick we learned about this was to find a big grasshopper and have it chew the wart and secrete it's spit. Worked like a charm. The root contains the most latex (white milky substance secreted when broken in half) and is the best part for gathering this juice.

Being one of the richest plants in vitamin-C it cures cold and is a trustworthy footsoldier in fighting off the seasonal flu and scurvy, and as a vitamin-A source it helps in many skin conditions, like acne and ecsema for instance, a strong decoction of the herb and root is recommended. It's mildly laxative, so it helps when you have hard stomac and constipation. Known to clean the liver and kidneys as well as the system that connects them, it's a friend of anyone suffering from conditions related to the inner organs.

According to Wikipedia (link below): "The flowers are used to make dandelion wine, the greens are used in salads, the roots have been used to make a coffee substitute (when baked and ground into powder) and the plant was used by Native Americans as a food and medicine." And further: "The leaves are high in vitamin A, vitamin C and iron, carrying more iron and calcium than spinach." However, in French it's called Pissenlit (lit. "wet the bed") due to it's effective diuretic properties (esp. the roots). Something to keep in mind, making it better suited for morning tea than the evening cuppa.


I've begun looking forward to your daily herb posts! So far I've known the ones you posted, but it's refreshing to see more detailed info about each located in one spot.

Regarding dandelion, I was surprised upon my move to California to see them... well... Nowhere! People here really love their manicured lawns! I was very happy the other day to walk into my slightly less manicured back yard (read: virtual jungle) and see a dandelion that had reached almost a foot tall! I was so excited to see that "pesky" weed! LOL. I left it be hoping that it will seed and grow more, if nowhere other than my backyard (I only use it for the dogs to play in).

I do have one suggestion for these posts though. Perhaps you could include the most common name of the plant in your title to make it more easily searchable? Because I have to be honest, I would never remember your username to search by (I'd probably just type a random string of letters and cross my fingers), and most people don't know the scientific names of these common plants.

Other than that, thanks for posting these, I hope you keep it up. It's now one of my favorite things to read when I first go online for the day!


I thought of using more common names, but since people come from all over the world here with a wide variety names and nicknames, I fell down on the Latin. If you do a search for dandelion, this post will show up, and if you are to investigate further, knowing the Latin names is crucial and will bring your closer to any good sources faster. Basically, learning the Latin names for these herbs is both fun and useful from an educational point of view at the same time.

As for the lion in your backyard; wait until it deflowers, pick it up and blow the fluffy seeds away, and make your wish! If this wish is to spread the seeds, you can be 100% sure your wish would be granted
edit on 11-3-2014 by Utnapisjtim because: added a word

I like the young leaves in salads.
I will have to try making the coffee substitute from baked roots-sounds good.

Another non medicinal use of dandelion-The flowers when gone to seed also provide an excellent tinder for lighting fires-they bust into a short lived flame with only the tiniest spark,good to use to light small twigs or shavings to start a fire.

I once made the mistake of showing one of my dogs a thick dandelion root,which he munched down rapidly-before long,he could sniff them out and would dig up the garden wherever he found them!
This then spread to my other dogs,who picked up his behaviour-by then my garden was full of holes,and empty of dandelions..

I like the young leaves in salads.
I will have to try making the coffee substitute from baked roots-sounds good.


And if you do manage to brew some dandelion coffee, please let us know everything about it!

Another non medicinal use of dandelion-The flowers when gone to seed also provide an excellent tinder for lighting fires-they bust into a short lived flame with only the tiniest spark,good to use to light small twigs or shavings to start a fire.

Never heard of that, but it makes sense

I once made the mistake of showing one of my dogs a thick dandelion root,which he munched down rapidly-before long,he could sniff them out and would dig up the garden wherever he found them!
This then spread to my other dogs,who picked up his behaviour-by then my garden was full of holes,and empty of dandelions..

LOL, that's a good one I haven't heared before! Maybe it's because it's both a laxative and diuretic, knowing dogs communicate with eachother marking along their trail. How does it feel to be a dog-god?


You know, I hadn't though of it that way! You are forcing me to learn the official names. I like it! I'll make an extra effort to memorize these names as I read your posts.


Great! I don't know too many Latin names of plants meself, but I know a few and it's ever useful.

posted on Mar, 11 2014 @ 10:10 AM
link
I too look forward to these daily posts. I'm learning things and I appreciate that. Now had I known about dogs and dandelion root, it would have saved my poor back lots of discomfort in the past.

It really is important to learn the Latin names as many common plants have similar names and are often confused.
It's the only way to be sure you have positively identified what you are about to eat.
edit on 11-3-2014 by Asktheanimals because: (no reason given)


Indeed. While researching this one I learned that in Canada it's root is concidered a drug because of it's diuretic properties.

It really is important to learn the Latin names as many common plants have similar names and are often confused.
It's the only way to be sure you have positively identified what you are about to eat.

Indeed, and you'll learn a few useful words and phrases in Latin too, many of which have been borrowed into English and other modern languages. The 'officinalis' part in dandelion's Latin name is the same as in 'office', and means 'workshop' or even 'pharmacy' and is given to herbs with important medical plant remedies.