Any clues as to what these guys might be up to?

On your iPhone 5 you can just type into google free image hosting then pick a site eg; tinypic it'll have a thing saying chose file then it'll go to your camera roll you chose the pic you want to upload then it'll upload, copy the link that says for message boards or forums and paste it in your reply and presto your image shall be here


Will see what I can do in at work right now I've got about 20 mins left on my lunch. If not I finish at 4pm (UK) time I'll upload it after work 
Edit: yay it worked let me try posting the plane info
edit on 13-3-2014 by ThePeaceMaker because: (no reason given)


Edit: wow I'm getting good. Here's the plane info missed a bit out though at the bottoms. But thanks stealth I've learnt something posted on Mar, 13 2014 @ 05:19 PM
link
Oh i forgot to say in the picture of the route, where it ends is not the final destination. I just happen to take then pic when it was in flight. I think the pilot was drunk


Haha nice one, you learn something new everyday


Here's another one I took, what I found odd that it took off from heathrow crossed the English Channel and circled close to 3 airports in France and then headed back to the UK to land again. If they had a fault with the plane do they not land at the closest airport or would it be a case of that it could make it back to heathrow to avoid anymore problems for example with the passengers and luggage.

It was a British airways flight to tel aviv airbus a320 
Depends what sort of fault, sometimes when a plane has a fault they circle around for a while to burn fuel before landing.

This is a domestic QANTAS flight, been doing a few laps around the city. 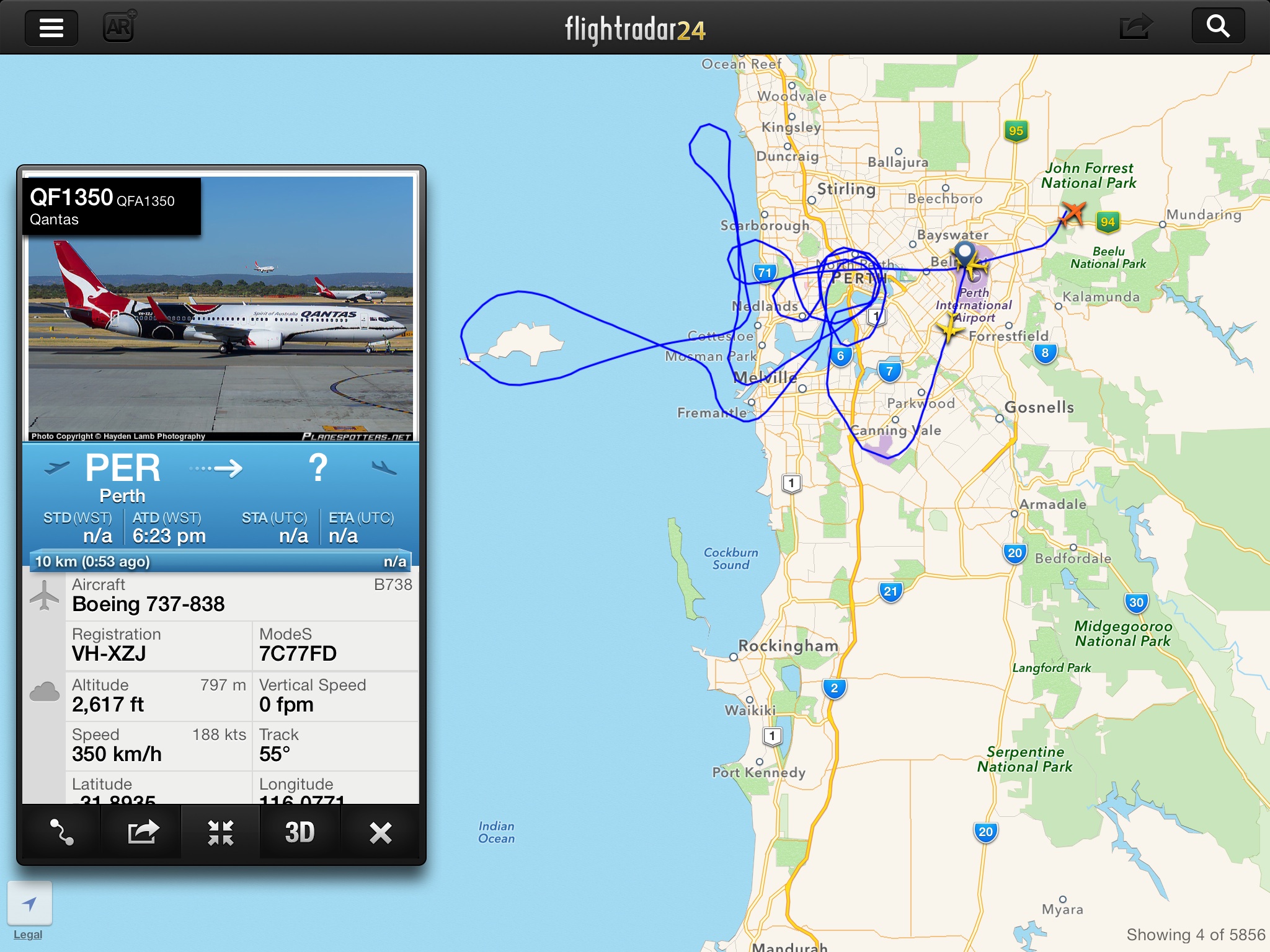 
My avnerd sources have been pretty quiet for a while now, I used to get the ACARS reports from the main cities daily, not so much anymore.

I check it out and see what I get back mate


They landed just after I took the screen shot.

I'm thinking there might have been some sort of problem with the plane, keeping an eye on local news to see if anything pops up. 
Not sure where it took off from but this is what the company does:

As well as ad hoc passenger and cargo charters, the company specialises in aerial survey and surveillance and in particular operations from the Maritime and Coastguard Agency (MCA). Work for the MCA includes surveillance and search and rescue support and providing aircraft on standby for spraying oil spills with dispersant.


Cheers stealth I'm just curious though, this was gone 2am in the morning it was pitch black and when I finally went to bed around 2:45 am it was still flying staying at around 3100 ft. I checked google earth on the location from where the route started but couldn't see any air fields. Very odd indeed

Expand it and it looks like an aerial survey pattern - flight originated at Luton Airport, departing at 00:19hrs.
Wonder if it's related to any oil / gas exploration that may be planned?
Best to do the survey at night when there is less air traffic and fewer people to question why this plane is flying up and down the area!

I wonder if there is anything that tracks military flights? Talking to my little Sis last weekend and they have had some stuff flying around out of the ordinary recently. First a Britten Norman Defender, then a week later a Predator flying around. She lives next to the old decommissioned Sculthorpe airbase in Norfolk, so is used to seeing the usual military traffic and nighttime low level helicopters, as well as the Ospreys, but thought the Defender and Predator were not the usual run of the mill stuff.
edit on 24-3-2014 by Britguy because: (no reason given)

If a plane isn't flying an actual mission(for lack of a better sentence) , then you can track it, all aircraft are supposed to be ADS-B equipped by now I'm pretty sure.

posted on Mar, 24 2014 @ 07:29 AM
link
Cheers guys thanks for your input. I still think it's pretty odd though that late at night flying right over gatwick airport. Oh well I'll keep my eyes open for the next one


lol well done!
I can only give you one star... pity I can't give you a bonus.

This is just a theory but if they needed to servey the area near the airport then perhaps this was the best time to do it ie. not much air traffic. Only a theory though.

But all I did was punch in the rego of the plane and the company name, usually with a few bits of info you can find out roughly what they're doing and I'm happy to help out anyone if I can


This is going to sound really stupid but when you said you just searched for the plane reg etc do you mean just in like google or something ?


Doesn't sound stupid mate we all had to learn from somewhere. Yeah I put the rego or flight numbers into google and something should come up, it definitely will if it the regos there, flight numbers can be a bit trickier though. Sometimes I've have to ask around if I can only get the flight numbers.