Any clues as to what these guys might be up to?

posted on Mar, 11 2014 @ 01:31 AM
link
Having a sticky beak on the flightradar24 app and don't often see much of interest in my area (Perth), apart from a few Singaporean Airforce trainers flying about.

This one is a new one for me. 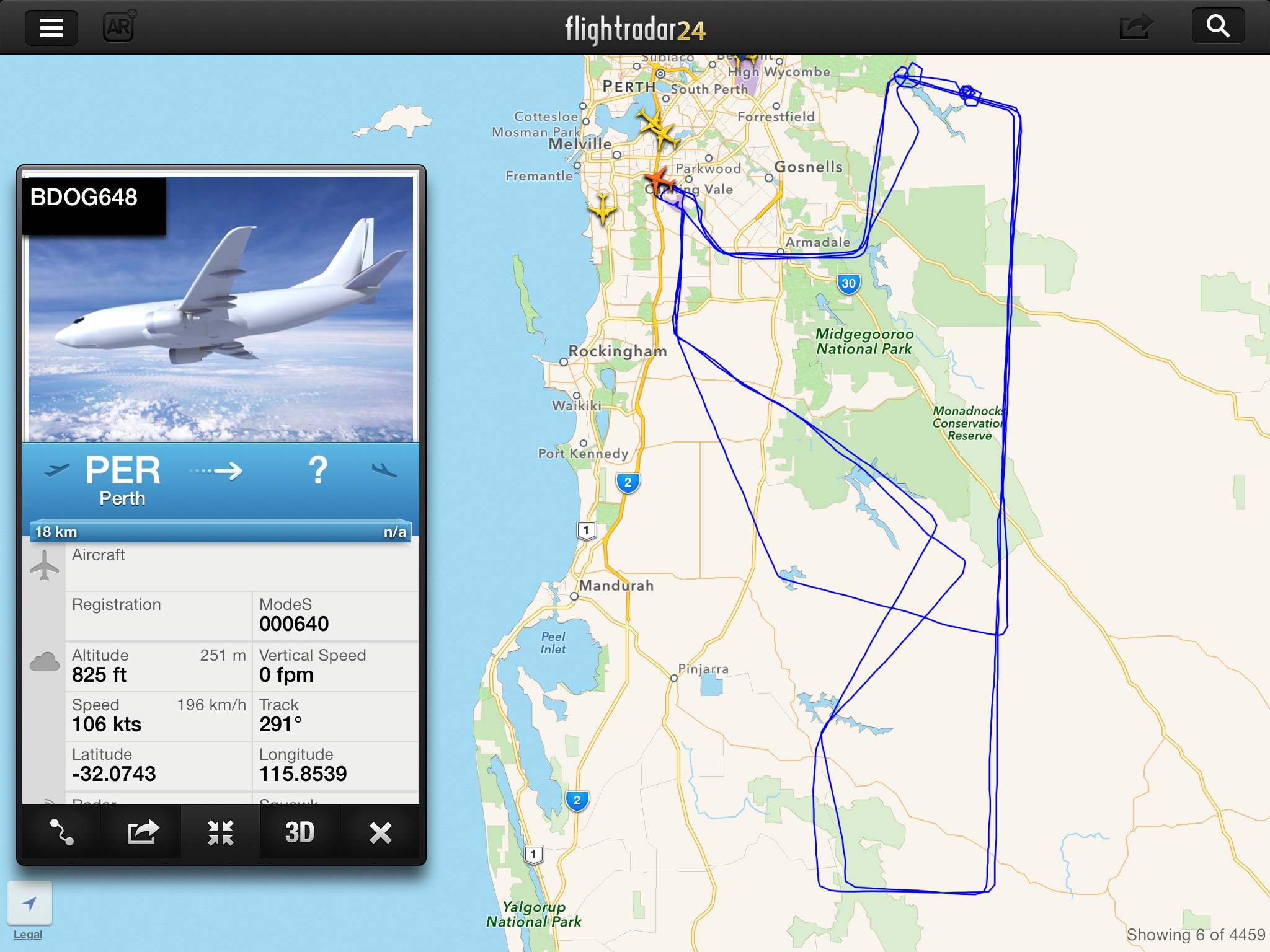 Wonder if anyone knows any more about it?

On a side note the RFDS plane has been doing odd things today too ill post a screen of that shortly.


Only guessing but ground radar / prospecting is one possibility.

Ring them up and ask!


That's weird, I can't pull any info whatsoever on the flight. Searched through flight aware and flight radar and both won't even show up BDOG648


Yeah, which is why I thought it was odd.

In and out of Jandakot by the looks.


I know a few spotters from over your neck of the woods, I'll ask around and see if anyone knows.


According to the pic of the plane it appears to be without any markings. if thats the case it will undoubtly have something to do with uncle sam.


That's just the app, nothing sinister, the plane in the picture is a 737 but the plans flying would most likely not a be a 737.

They just show generic pictures of the aircraft by the type that comes up, if you want to see the actual plane you need the rego number, and flight radar 24 doesn't show one for this aircraft.

I'm not to sure if anyone airline tracking apps actually show you the exact aircraft picture although I wouldn't imagine it to be that hard if you have the Rego number they could just cross link it airliners.net or jet photos.net


Wondering if it's a water bomber?

Notice it's flight path takes it over several large dams.

Alrighty, so I found the aircraft BDOG is short for BIRDDOG which is a light fixed wing aircraft used for Air Attack Supervision of Fire bombing aircraft used by the National aerial fire fighting centre.


I was searching BDOG648 when an 'AhHA' moment came along and I searched just for BDOG lol only the 6 after it means something ( means it's from WA) but the other two numbers are just random so that's probably why google or the flight trackers were showing up much.


Nice work, that would explain my observations of it passing over all those dams.


For bonus points the rego number of the plane is: VH-KUE

posted on Mar, 12 2014 @ 04:08 PM
link
Hey stealth this could be a good thread to include other odd flights on flight tracking apps like we discussed. If alphahawk was happy for others to post their odd trackings. Just a thought

Sorry that I haven't replied with anything useful alpha, interesting though. I use flightradar 24 on my phone quite a bit especially when ok fishing
edit on 12-3-2014 by ThePeaceMaker because: Spelling


Yeah that would be a great idea for unusual aircraft people spot, I don't think alpha would mind, the plane he was searching for got found so now we move onto the next aircraft

posted on Mar, 13 2014 @ 02:40 AM
link
I've actually got a screen shot from my phone with an aircraft route made by a small prop plane over Southern England/London is like to share but don't believe I can upload pics from my phone. But it takes off and leaves circles everywhere I don't think there is one straight part in it's route. I don't think it's anything secret just a funny path if I can get on a lap top I'll upload it later


What kinda phone have you got? I may be able to help you.

Like it's not a secret plane or anything, the aircraft was a Piper PA-31 Navajo. Probably someone in their private plane. It's just the route it left is quite funny beginning to wonder if the pilot was under the influence


Nope not a problem here, I would be very interested in seeing what other people have spotted as well.


Cheers alpha. Was kind of discussing with stealth a few days back about making a thread. But with my knowledge (very little) of making threads, wording them correctly etc and I have a very basic knowledge of aircraft tracking I knew if I made it would be a bit ..
Crap?

Even the title of this thread is perfect because it could mean about any aircraft. Anyways thanks again when I get home I'll upload one I have on my phone, not because the aircraft looks suspicious just the flight path is insane