Ancient monuments of the Nabataeans were built according to celestial events

posted on Mar, 10 2014 @ 12:32 PM
link
One again we see ancient man was uniquely interested in the movements and alignments of the heavens 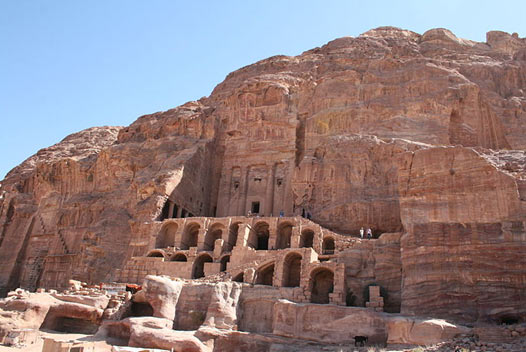 A new study published by the Nexus Network Journal suggests that the spatial position of palaces, temples, and tombs built at least 2, 300 years ago by the Nabataeans, including the famous city of Petra, were determined by the movement of the Sun and other astronomical events. The new research was carried out by scientists from the Instituto de Astrofisica de Canarias (IAC) and the Instituto de Ciencias del Patrimonio, Incipit (CSIC) in Spain, and the University of Perugia, Italy. Using statistical analysis on the spatial position of significant ancient monuments built by the Nabataean people, the results suggest that the great buildings are linked with the equinoxes, solstices, and other astronomical phenomena.

As an aside, there is another astronomical connection, weaved into the very fabric of Nabataean culture. Among the pre-Islamic Arabic deities their chief was Dushara (or Dhu Sharā'), whose cult center was at Petra. At the center of Dushara's sanctuary was a "large cubic stone." This was found throughout Nabataean worship. Nabataeans would represent their deities as large square blocks, stones, or cubic shapes, and among these would be placed astronomical objects like meteorites.

Many pre-Islam Arabic deities had familiar names: Ishtar, Nergal, Bel, Astarte, El, and so on. The influences ranged from Sumer, Egypt, Greece, Canaan, and Western Semites. Dushara was an Edomite deity. Their worship seems very concerned with astronomy.

“The Arabs serve I know not whom, but I saw this statue which was a square stone.” - Maximus of Tyre

“Theus Ares (Dushrara); this is the god Ares in Arabic Petra. They worship the god Ares and venerate him above all. His statue is an unworked square black stone. It is four foot high and two feet wide. It rests on a golden base. They make sacrifices to him and before him they anoint the blood of the sacrifice that is their anointment.” - the Suda Lexicon

During Hellenistic times, “Nabataeans worshiped their own gods in symbolic form such as square block or triangular baetyls, sacred meteorites, or abstract stone blocks or pillars...” -Nabataea.net

Nabataean worship was widespread as they were traders, it ranged from Greece to Egypt to Syria, and persisted well into the Islamic period.

Now fast forward to Islamic times, and at the heart of Mecca, the holiest place to Arabs, we still find a cubic square, housing what many believe to be a sacred meteorite - very Nabataean, if you ask me.

posted on Mar, 10 2014 @ 11:14 PM
link
hey AD
bmp!
I wonder how they did their measuring and aligning and what their math skills were...
a lot of these places are celestially aligned...i wonder why?
sandf


BM, many thanks for adding your extremely interesting insights!

I wonder how they did their measuring and aligning and what their math skills were... a lot of these places are celestially aligned...i wonder why?

Having carved wood and stone I marvel at what ancient man did, and as far as we know they did not have chainsaws nor air tools. I can't imagine the math and planning it took to create such a master piece out of a mountain, though I can imagine they could have used a Celtic cross.