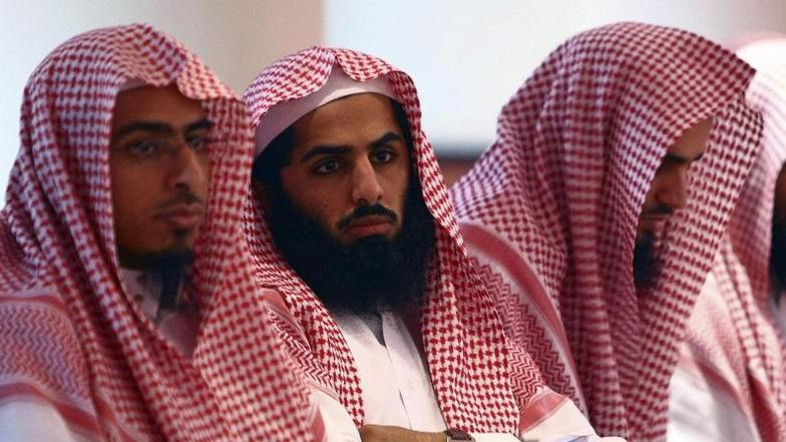 Residents in Saudi Arabia’s southern city of al-Baha were angered by the Saudi religious police’s decision to level an ancient graveyard to the ground and remove most of the tomb stones over the graves, reported al-Hayat newspaper on Monday.

The Commission of the Promotion of Virtue and the Prevention of Vice razed what some residents believed was part of their heritage in line with Islamic tradition that does not encourage the use of tomb stones.

A committee consisting of the commission, the city’s municipality among others has been appointed to sort out the “Zinat” graveyard, the commission’s spokesman, Nasser Saeed, told al-Hayat.

The residents accused the religious police of sabotaging the historical graves which date from as far back as 3,000 years. Some residents expressed the opinion that the graves should have been maintained as they represent the heritage of the city.


Far be it for me to tell people what they should or shouldn't be doing in their own country but like everybody else here I have an opinion. This sucks. Here we have yet another example of an ancient site being assaulted under the guise of not being 'Religiously correct/acceptable"

All throughout Human history we've seen this before so it shouldn't really surprise anybody reading this why we sometimes have gaps in our understanding of our collective past. It's their country and they can do what they want. Does this make it right? The area in question is well worth the research if you are like me and enjoy exploring ancient sites.

Erasing the past seems to be a horrible human past time/preoccupation.

This is just disgusting, God I hate religious types


Iknowstuff!!! thought you had gone and a tiny bit worried glad you are back dude .

Religious police I don't know anything so scary and sick in the world.
Imagine If we had them in the west (Iam sure some would welcome them) scary scary stuff.
S&F Slayer


The scary thing is that no matter what plattitudes are offered, these people would see all of us non-believers, our cities, our art, our culture and all we are, ground into the same earth and obliterated. For offending their stupid sense of self.

At least (not by much, but still) Christianity co-opted and incorporated indigenous beliefs and sacred places into itself and progressed.

Make no mistake, these people are a danger to humanity. In time their own graves will be swept away and the Earth will rotate oblivious to their poisonous presence but until then ignorance and violence will feed their blinded souls.

IMHO any religion that needs a police force is actually a backward step from Sun Worship.
Destruction of heritage is a sure sign that the truth being championed is already on shaky ground.
Roll on the end of oil dependence, and the end of tolerating these muppets.

posted on Mar, 10 2014 @ 10:00 AM
link
I am currently in school right now studying to become an Archaeologist, this kind of thing just make me sick to my stomach.

When it is completely unnecessary ancient sites should never be disrupted in such a way, the worst about this was that these were men of the law who had total disregard for their ancient history, and not just some hooligans.

As someone else said it may be their country but it is our history as human beings. People so often think that history is inconsequential to who we are now and is useful only for movie scripts; but that kind of thinking could not be farther from the truth. To destroy history is to destroy the future, for if we do not know our history we will not learn from it.

I hate to hear of stories like this one, Such a shame to loose another piece of history.

On another note, and I hate saying this...... It has to happen unfortunatley. In this case they are wrong IMO to justify leveling an ancient site on religous grounds. But everywhere around the world, in general really history is only history because of its age.

What made a place an historic site today was because it was no longer used and in most cases suddenly. We cannot keep everything from the past still alive, it all has to go at some point. The reason we have sites across the world is because they were made for the people of the time. As time goes on the peoples needs change and develope

I am reffered to by most of my friends as a fanatic of history, I love it! more than most things in Life. In Malta im blessed in many ways to live on a rock full of history. But being on a rock made me realise that we cannot hold on to everything.

In Malta we have cases all the time of destruction of historical sites and artifacts mostly by vandalism, Goverment and Religion. Sometimes one site in one year can have this damage made by all three causes.

Most cases of destruction in Malta are actually for the greater good...(again it hurts to say it ) nearly all the sites are on/under farmland and all the major roads and even ancient settlements underwater have had to be destroyed to make our main Freeport and without that Malta becomes economically disabled. Even with all the tourism from these sites they wont bring in the same revenue.

Yes the goverment could and SHOULD be making sure best of both worlds are accomidated for, alas where money is involved options become limited and hard choices are made......Some really easy choices for the ones who simply do not care. Which doesnt matter of religion or goverment there are alot of people who just don't care about our history.


If everyone in the US just went a little easier on the accelerator pedal of the monster truck, it would make a difference to these evil religious operatives.

Sending them quickly to the next life is a win-win. I don't understand why that isn't recognized as one of the greatest opportunities for cooperation in our age.
edit on 10-3-2014 by InverseLookingGlass because: missing word


The piece is about Saudi Arabia but was thread was really directed at all of us in our little parts of the world and on a whole. I can't think of one region where this or something similar hasn't already occurred.
edit on 10-3-2014 by SLAYER69 because: (no reason given)

posted on Mar, 10 2014 @ 10:37 AM
link
3000 years and hauled like that into nothingness, they are erasing their own history.
I wonder if really worth it to remove all traces of history in the name of religion, if that so we can erase anything 6000 years ago as "not relevant".

These religious police must be stop. Even if cannot be avoided, they should relocate the remains to a proper place. Their religion should have ways how to treat the dead, and I strongly believe bulldozing is not one of it. They should listen to their own people.

posted on Mar, 10 2014 @ 10:42 AM
link
The first two comments both hate the "Religious Types" yet use GOD to point out their frustration. I thought that was funny... Exit stage left...

MessageforAll
The first two comments both hate the "Religious Types" yet use GOD to point out their frustration.


You can believe in God and hate religion.
Iam an anti theist but believe in God just not religion because that is from man.
Not hard to understand is it?.

posted on Mar, 10 2014 @ 10:51 AM
link
I think I would rather worship the sun than that religion which abhors any others, like the Taliban blew up that huge statue of Buddha in Afghanistan, still, not that long ago synagogues where burnt to the ground in middle Europe......

MessageforAll
The first two comments both hate the "Religious Types" yet use GOD to point out their frustration. I thought that was funny... Exit stage left...

God is not religion. Religion is man. God is something else.

I am a believer in some form of deity. And I despise religion, too.


You can believe in God and hate religion.
Iam an anti theist but believe in God just not religion because that is from man.
Not hard to understand is it?.

The other primate beat me to it.

Yet they must make a pilgrimage to Mecca to walk around a building with a rock in it.


You may be stronger Gorilla but us Chimps are quicker lol

butcherguy
They don't believe in idols, to go so far as to remove ancient tombstones....

Yet they must make a pilgrimage to Mecca to walk around a building with a rock in it.

Careful, spongebob. The house of God is no place for logic.