Ukraine: The Haze of Propaganda 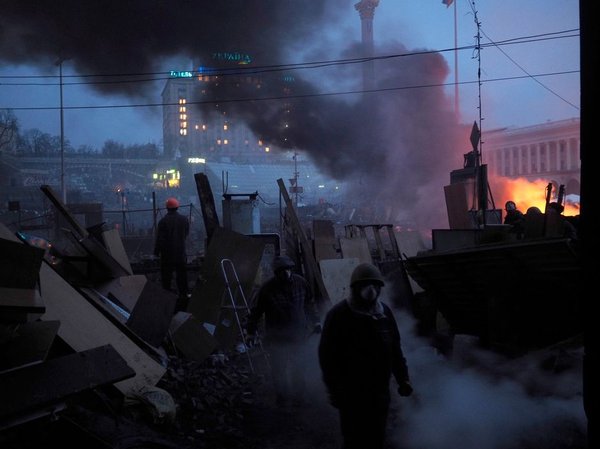 Ukraine: The Haze of Propaganda

From Moscow to London to New York, the Ukrainian revolution has been seen through a haze of propaganda. Russian leaders and the Russian press have insisted that Ukrainian protesters were right-wing extremists and then that their victory was a coup. Ukraine’s president, Viktor Yanukovych, used the same clichés after a visit with the Russian president at Sochi. After his regime was overturned, he maintained he had been ousted by “right-wing thugs,” a claim echoed by the armed men who seized control of airports and government buildings in the southern Ukrainian district of Crimea on Friday.

Interestingly, the message from authoritarian regimes in Moscow and Kiev was not so different from some of what was written during the uprising in the English-speaking world, especially in publications of the far left and the far right. From Lyndon LaRouche’s Executive Intelligence Review through Ron Paul’s newsletter through The Nation and The Guardian, the story was essentially the same: little of the factual history of the protests, but instead a play on the idea of a nationalist, fascist, or even Nazi coup d’état.

In fact, it was a classic popular revolution. It began with an unmistakably reactionary regime. A leader sought to gather all power, political as well as financial, in his own hands. This leader came to power in democratic elections, to be sure, but then altered the system from within. For example, the leader had been a common criminal: a rapist and a thief. He found a judge who was willing to misplace documents related to his case. That judge then became the chief justice of the Supreme Court. There were no constitutional objections, subsequently, when the leader asserted ever more power for his presidency.

You know, this piece made me stop and think and makes some rather good points. It's a long read and worth your time. I think it brings to light some rather interesting points. I know there will be left/right pundits that will quickly swamp jump in and say the other guys are bad. I thought I'd post it and see if we could get a much deeper discussion going instead of the normal Chest puffing on either side.

Enter a lonely, courageous Ukrainian rebel, a leading investigative journalist. A dark-skinned journalist who gets racially profiled by the regime. And a Muslim. And an Afghan. This is Mustafa Nayem, the man who started the revolution. Using social media, he called students and other young people to rally on the main square of Kiev in support of a European choice for Ukraine. That square is called the Maidan, which by the way is an Arab word. During the first few days of the protests the students called it the Euromaidan. Russian propaganda called it, predictably enough, the Gayeuromaidan.

So is this exposing the overall state of propaganda being tossed back and forth, propaganda itself? Again, if you want an interesting read here it is. It's got everything NAZIS, Gays, Muslims, Capitalist, Banksters, Corporate greed etc etc etc...

Damn, and I was going to say something.


Very thought provoking Slayer. When people can distance themselves from their surroundings and the bombardment of media, only then does it appear as propaganda. Otherwise, it goes by titles such as Nationalism or Patriotism.
Reminds me of how World War I started...a spat between first cousins wrapped up in flags and fervor. Or more recently how Iraq and Afghanistan were invaded due to the aactions of a handful of Saudi nationals. "You're either with us, or against us". Which lead to such amusing acts of "patriotism" like bulldozing and burning Dixie Chicks albums in the states.

Propaganda is all around us. It is the tool of social control for those not able to discern the reasons behind the rhetoric which, unfortunately, usually ends up in death and destruction.


I wrote a thread a while back about this sort of thing, It got much attention at the time. When you get a chance, I took a swing at all of them....

Your News source: Spins, Slants or STRAIGHT OUT LIES!!!


Just clicked on it...has it been that long already?
And yet nothing has changed but the names.
The players are still the same.
sigh...


This is a long read, but well worth it. THanks for sharing.

What I take from this article is that governments and media outlets use terms like "right-wing extremists" and other propaganda to create division among the readers.

What people fail to see, as this article points out, is that the revolution involved many different people from all sorts of political/social groups. This was an action by the people, not the Left or Right.

posted on Mar, 10 2014 @ 09:21 AM
link
Reading through the comments I thought this one stuck out to me .Or should I say I had a feeling about it and may be quite true "Mark • 8 days ago
This is a classic example of Neo-Liberal propaganda.

If you don't think the protesters are right wing, then you clearly no absolutely nothing about the political landscape of the Ukraine. The opposition is made up fo 3 Parties - UDAR (Klitschko), Fatherland (Tymoshenko) and Svoboda (Oleh Tyahnybok).

"Fatherland" hardly sounds Liberal, does it? They are all conservative, right wing groups that have nothing in common with your ideas of liberalism. Svoboda is a Far Right group that has been issuing death threats against all the Jews of Kiev and of any left wing group. The house of the Communist Party leader has been burnt down; the general secretary was dragged out into the main square of Lvov and had needles put under his fingernails whilst being beaten by the crowd. The Nazi Militia "The Right Sector" has made a pact with the current interim Government, acting as an enforcer throughout the West of Ukraine. This party has been growing in support as UDAR has being losing it.

Accusing Yanukych of having a rich father is the most astonishing hypocrisy I've seen, when Tymoshenko is one of the world's richest oil barons and has masses of wealth and power.

Furthermore, 60% of the Crimea is Ethnic Russian and Svoboda has declared death threats against the Russian population there. Crimea never has been a cultural part of the Ukraine. Russia is acting against what it perceives to be a right wing threat to it's people in the Crimea, and they are a threat, whether you will admit it or not.

I sympathise with the protesters to the extent that they disagree with their former PM. But the fact remains it is only the West of Ukraine that doesn't like Russia. The East of Ukraine wants to be part of Russia, including Kharkov and the Crimea.

To ignore this basic fact and act as though the protesters are Liberal demonstrators against a brutal dictatorship is just typical of the arrogance of Western Neo-Liberalism, and it will bite you back when you've realised the mistake you've made. "

posted on Mar, 10 2014 @ 09:27 AM
link
Slayer, I'll be honest.. I'm really not in the mood for a long read today where I come away feeling I have nothing more than a better comprehension of one side or the other for how they're playing with information and killing the truth like a capital offender on execution night.

I see things like this sentence: "In fact, it was a classic popular revolution. It began with an unmistakably reactionary regime. A leader sought to gather all power, political as well as financial, in his own hands."

....and I pause. In an article decrying propaganda, they open the premise with......propaganda. So does this move beyond a strictly Western perspective of "Russia all bad. Former President all bad. New Government not good..but better..and shut up, it's happening, deal with it"? That is, at it's core, the message coming through most media outlets from Op-Eds to front page features. It's scary for the uniformity and lack of much to support supposition and assumption.

.........like what the true nature of an event LONG from over and FAR from fully understood may be?

posted on Mar, 10 2014 @ 10:47 AM
link
First: Its their country, whatever their choice is up to them to decide.
Second: Ukranian should know better, NO Euro and NO Russian, Ukranian all the way.
Third: The protester should get organized on creating new government FAST. The longer they stall, the more player and interested party coming in, the more complex it will be.
Fourth: There is no longer Ukraine. Just a country that will split.

posted on Mar, 10 2014 @ 02:23 PM
link
I read a propaganda article a month or more ago. That was shown to those in the Ukraine, with photos of the Statue of Liberty, the statue of Jesus in Brazil and other famous landmarks, lit up at night in Ukraines National colours.With, we are with you! Now that is propaganda.

posted on Mar, 10 2014 @ 03:40 PM
link
Russia has committed a Crimea and there's not much the West is going to do about it. Obama is an undecided conflict-avoider and the European Union gave up their defenses long ago. Putin has chosen this time because he knew his invasion of Crimea would fly without much opposition. Removing the flags from his soldiers uniforms is one of the most hilarious feats of military History Ive ever seen.

From this point forward, anything could happen. Its true about right-wingers though. This happens to be a right-wingers vs. right-wingers conflict. Many former Soviets have embraced right-wingism after the collapse of the great left-wingers experiment of socialism and communism. I hope they someday find a balance point somewhere in the middle of the spectrum.