Aerial photographers, surveyors and filmmakers who want to fly small drones in U.S. airspace are able to rejoice after a judge dealt a setback to efforts by federal regulators to rein in use of the unmanned aircraft.

Raphael Pirker, who had been docked $10,000 by the Federal Aviation Administration for using a drone to shoot a promotional video, won an appeal yesterday of the fine for reckless flying. The judge in the dispute dismissed the first-ever such fine, saying the FAA has no authority over small unmanned aircraft.

Is this a loophole, temporarily open? Looks to me like pretty much anyone can invade our privacy. Hobbyists may not be just that anymore. Private detectives and investigators seem to have an added dimension particularly if the vehicle is further disguised as advertising or delivery.


The age of privacy is over. There has never been a FAA ban on flying RC planes, not even the jet powered ones. Regulating these has been left to cities and counties. Also many of those RC's have had cameras on them for some time. Modern camera platforms (quad copters) have track back GPS technology so that they fly back to their point of origin when control is lost. This feature makes them far safer than the existing RC's.

It is inevitable that there will eventually be a FAA imposed weight restriction as people don't want to get killed in their living rooms by a falling object of any kind.


For sure and I'm thinking maybe drone ownership might shape up as the new NRA - an armed populace putting down tyrants.

Just wait till one of those drones ( which can be bought between 300 and 1000 dollars at the least) gets sucked into the engine of a jet and then the FAA will scream bloody murder. They don't fly so high but this could be done near an airport before the plane takes off.

So the FAA doesn't have jurisdiction But this can be abused and misused by the ill intended.


It has always been a Federal crime to crash a RC into a plane of any type. Logic dictates that it is not likely to happen as it has not happened yet. People have been flying RC planes for 30 years now and those that do not want to go to prison stay away from airplanes.

In fact there are more arrests in the USA every year for people pointing lasers at aircraft than there has been of RC interference with an aircraft.

Does that mean that some idiot won't? No it does not, just that it has not yet. Making a mass of legislation over it makes no sense at this time.

posted on Mar, 7 2014 @ 05:04 PM
link
reply to post by luxordelphi
Over rural private property a 12 gauge 3 and a half inch magnum and some good waterfowl shot works wonders to discourage small private owned and controlled drones from spying too close.

In my view, there is some tactical/safety advantage in marshaling a drone with hover capabilities and infra red upon hearing a noise outside in the dead of night.

Further, as a citizen, I wouldn't want to sort of be left behind in a landscape where governments and corporations have drone armies.

posted on May, 11 2014 @ 07:53 PM
link
The FAA has appealed a federal judge's decision in this case... so it sounds like the FAA is going to get their way with the this BOGUS story of a drone nearly colliding with a jetliner in Florida....

My bet is the drone colliding story is BOGUS, the FAA wants full control of the skies.... or maybe, this deserves it's own thread... It was a military drone, in which flew near a civilian jetliner... thus the military almost shoots down an civilian airliner over target practice.... that should be the main story!!!!

The "drone" was an RC plane. It was shaped like an F-4 Phantom, which no UAVs of any type are. That means the only thing it could be is an RC plane. But by using the term "drone" instead, they can generate outrage over it.

It's also possible the story is bogus because the FAA wants full control.... plus the pilot said it it appeared to be small camouflaged rc "drone".... so he really didn't get a good look at it.... thus could be military.

The descriptions I read all said it appeared to be an F-4 Phantom. That means RC plane.

The FAA said US Airways Flight 4650 from Charlotte, N.C., a 50-seat jet, was approaching Tallahassee airport when it passed the drone, which the pilot described "as a camouflaged F-4 fixed-wing aircraft that was quite small." The drone was more similar to a model aircraft flown by hobbyists rather than a so-called quadcopter that many see as the type of unmanned aircraft with commercial potential.

I know you know this one... Tyndall Air Force Base in Florida uses Phantoms for unpiloted flying targets for missile and gun tests etc... it's possible they almost shot down a civilian airliner or the military almost collided with their Phantom drone into a civilian airliner.

No, because read the articles. Every single one of them clearly states "a SMALL aircraft". There is NO WAY that a full sized QF-4 is going to be mistaken for a small aircraft. In fact reread my last reply with the article.

"as a camouflaged F-4 fixed-wing aircraft that was quite small."

The only F-4 that's camouflage is a private aircraft that works with museums doing demonstrations. And there is no way that a pilot would EVER mistake a plane that's so small he thought he had actually hit it, with a full sized F-4 Phantom.

Well yeah, an F4 is smaller than a civilian airliner..yes there is camouflage F4's in the military or was... plus the pilot isn't a expert in military aircraft... and the pilot didn't get a good look.... he said it appeared to be... not as fact.

go with it bro... they almost took down a civilian aircraft...

Oh dear god, just no. There WERE camouflage F-4s, they were all transitioned to grey, with orange high visibility paint on the tail and wingtips to be seen from the ground when they were converted to QF-4s and used as UAVs.

Did you miss the part where he said "it was so small I thought we hit it and didn't notice"? There is no freaking way a commercial plane is going to think that A) an F-4 is that small, or B) that they're going to think they hit an F-4 and don't notice it.

No QF-4 is camouflage, nor will they ever be. They are painted so that they can be seen from the ground by the range officials, when they're close to the range.

"The pilot said that the UAS was so close to his jet that he was sure he had collided with it," Williams said. "Thankfully, inspection to the airliner after landing found no damage. But this may not always be the case."

yeah he said it was close... but we really don't know for sure...the pilot sighting is about as good as an UFO sighting. There is no proof of it being a toy RC...

The QF-4 and now the QF-16 are painted grey with orange tails. It's more visible than the camouflage.

originally posted by: Zaphod58
a reply to: imitator

Your link doesn't work.
The QF-4 and now the QF-16 are painted grey with orange tails. It's more visible than the camouflage. 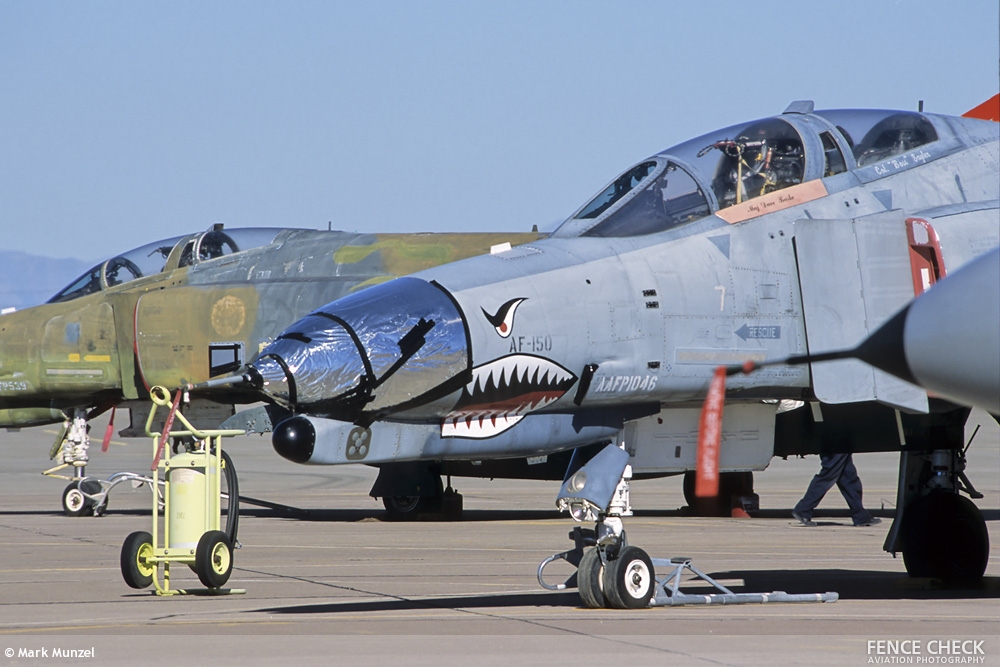 Wow, talk about a double standard. A pilot report is good enough to identify an F-4, but it's not good enough to say that it was an RC plane, because you don't want it to be one.

Wrong, there is a possibility of it being a real F4... not because I want it to be, but the possibility that a real F4 drone took out a civilian aircraft.

Wrong, he didn't say in fact it was a toy rc... said it appeared to be.

That's not completed through conversion most likely. All the QF-4s I've ever seen were grey with red tails, they went in green, and during the conversion process were repainted. ETA: The one you found was an early QF-4. The late model QF-4s in use now, are based on the RF-4, which were painted grey. They're adding orange and red to them to denote targets.

One other huge hole in your idea. A full size F-4 would show up on ATC radar both as a primary target, and a secondary, because the transponder was on. If it showed up on radar, ATC would have warned the flight. There was no radar target, so it couldn't have been a full size F-4.

"The airline pilot said that the UAS [unmanned aircraft system] was so close to his jet that he was sure he had collided with it," Mr Williams said at a drone conference in San Francisco.