The main thing being that the author is a CEO of Platinum bank.

Please have a read and fill me in on what else you see. I will share more information as the thread progresses. Please discuss. 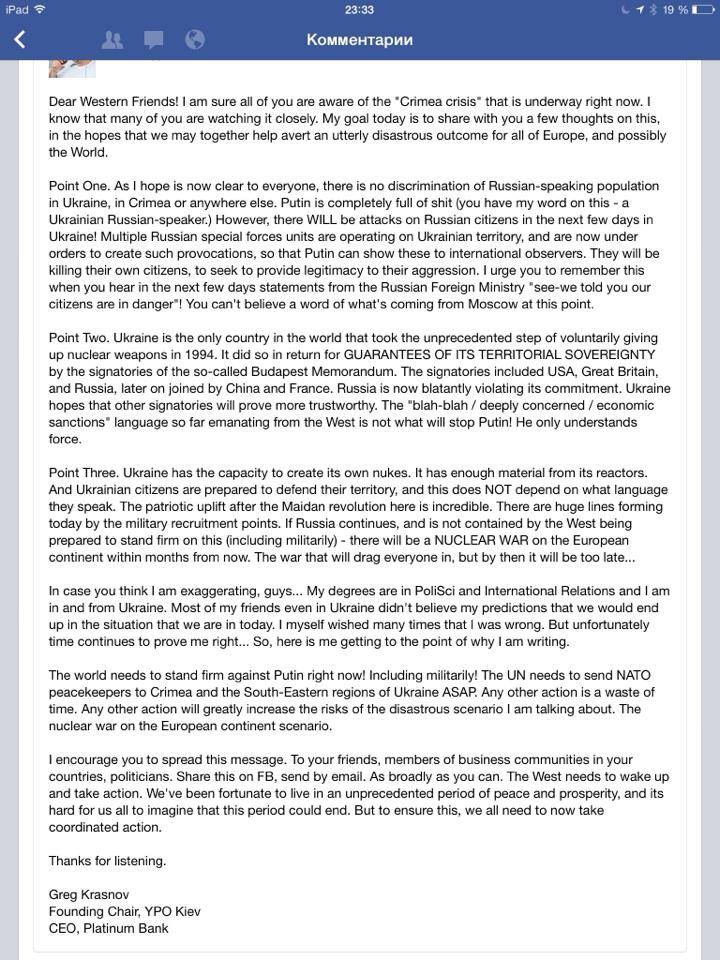 posted on Mar, 7 2014 @ 11:42 AM
link
I'm sorry, I would normally read such an article, but it comes from Facebook. I've seen a LOT of bogus posts running around FB for a really long time now. What's to say that someone didn't just type that up to get some attention or some personal gratification out of it?

Is there a possible source other than FB?

I have gone to the bank's site and followed that to their FB page. That page shows nothing of the sort, nor any link to this person in question. I would have to see some serious proof here.

More from the person's bio on the bank site

That doesn't jive with the info in the FB post

but...but..but..
the imf just installed neo nazis in ukraine?
so they can rape it

the quoted author says he predicted this...like to see that...
of course there are people who claim they predicted global warming too

I'm seeking if I can find the letter posted on any journalistic sites now.


This from February 24th. I have no reason to doubt the authenticity of the letter coming from the CEO:

ETA: I'm not saying this news "proves" the Facebook post...just that it makes it more plausible.
edit on 3/7/2014 by freakjive because: (no reason given)

Considering this just came across the wires on Aljazeera -

Kremlin fears ethnic cleansing if those behind the government overthrow in Kiev reach Crimea or Eastern Ukraine.


This ^ claim could set the stage for some bad things to happen in eastern Ukraine, and by the Russians if they really wanted stir things up. If things go in this direction there could be a very bad domino effect IMO.
edit on 7-3-2014 by Wookiep because: (no reason given)


I'll just repost rather than editing my first

A few things stick out but in the end, I'm no closer to saying if it's legit or not.

He mentioned being a political science major but his bio on the bank site only half compares with what's in the FB info. His bank bio says:

There is no PoliSci in here.

Then the bank site hasn't been updated since December, but that's ok and isn't really important.

But, as far as the link of a link of a link on the original FB site that hosts it. That makes me leary since it's not actually posted on his own site. It would show if it he did post it, right? I mean, all of his other posts are visible.

The media will run with ANYTHING. Just look at the Bitcoin guy. Days ago, the world thought we found him by some faulty newsweek reporter. Sadly, I can say I trust ATS more than anyone else and this is a conspiracy heavy site But we do dig for truth here, so there is that...

Then when he starts going off about nukes.. how does he know there is going to be a nuke strike in Europe? He's a banker, not a millitary strategest. That's some seriously bad stuff to be saying when you're a CEO of a bank. Maybe they're more outspoken than other bankers?

I dunno man. This still reaks. It seems legit but it's really hard to accept as real.

I have to add.. After digging on his personal FB page, he is EXTREEMLY thankful for and pro USA.
edit on 7-3-2014 by StallionDuck because: (no reason given)


Thanks for the additional contribution. I have mostly the same thoughts regarding his "knowledge".

It looks like he posted the letter on a "group" page vs a post on his private page...but it was posted as himself.

I'm still trying to locate more info about him.


Thanks for the additional contribution. I have mostly the same thoughts regarding his "knowledge".

It looks like he posted the letter on a "group" page vs a post on his private page...but it was posted as himself.

I'm still trying to locate more info about him.


Ok... I'm sold. The guy is a conspiracy nut too! lol I will admit that I have to give this information credit for quite possibly being real.


Greg Krasnov Max - its a claim to legitimacy. And not a bad one given that yanyk wasnt officially impeached. International law is more often then not form over substance.

Max Nefyodov Well, online of the meeting doesn't give impression that other members are moved by this claim. Even naive Westerners don't like to be fooled in such an obvious way. It may cause a delay but eventually doesn't mean anything...

Greg Krasnov Watch the chinese. They are key.

Max Nefyodov Greg Krasnov, Hard to be 100% sure about the Chinese due to translation but I'm sure they in the very least didn't directly approve Russia's actions...

Greg Krasnov They are doing the classical inscrutable chinese "ni nashim ni vashim". Meanin they are ok for putin to distract his troops westward so they can capture siberia. But will never admit that publicly so as to not lose face viz the west... (((

Thanks for giving me the chance and having the open mind to let me dig into this even with my original doubts!


BUT since he throws in the china vs russia conspiracy, (hey.. I believe like he does in a way) that what he says really isn't that credible, but he may at least be a voice among his people. Though he is in Kyiv and no Crimea. (Shrugs) Dunno bro.

posted on Mar, 7 2014 @ 01:20 PM
link
Mehh, basicly he is calling the West to step in. Not much Ukrainian in his words. Smells more like an operative doing his propaganda work.

We really need Ukrainian street people to say something and seems they cant access/ not exposed.
Somebody who can access facebook while others actually being shot, go figure how easy for that to happen.

My bet - A western/banker operatives trying to make propaganda/reason for NATO to step in. It will happen, one way or another. Dont worry buddy, NATO will step in with or without you, Ukraine, worth "owning".

No, I'm not siding with Putin either.


hes wrong on point two ....south africa gave up their nukes as well i think!!!! Interesting message....ill add the info to the back of mind with everything else.

posted on Mar, 7 2014 @ 01:37 PM
link
Even if this guy is lying, there is not really anything that he mentioned that couldn't be easily proven one way or another. Although I highly doubt Ukraine is furiously making nuclear weapons at the moment, nor do I think a Russian invasion will trigger a nuclear war. If it does, it will be with the West, and it will not happen immediately. There will have to a major escalation for something like that to occur, and most likely there would be a clash of ground troops before nuclear weapons were used. That is just my belief, given the current state of affairs in the region.

As an example...Russia invades Ukraine. The US is NOT going to straight up nuke Russia for that. However, if ground troops are sent in, then things could escalate to a nuclear war. But without ground troops from the West opposing Russia, Putin has no need to threaten the use of nuclear force either.

posted on Mar, 7 2014 @ 08:02 PM
link
The one thing that makes me suspicious is his English seems a little too perfect for me. If he lives in the Ukraine and speaks Ukraine, Russian and English perfectly kudos to him, but it seems a bit too good to be true to me.
edit on 7-3-2014 by markosity1973 because: (no reason given)

posted on Mar, 7 2014 @ 09:23 PM
link
I don't know if he's 100% correct or not, but Putin has been hinting for years that he wants to rebuild the soviet empire, so I can easily believe that he's trying to deceive everyone on this to get some territory back and gain popularity with his people. There are plenty of people in Russia apparently who don't like him that much, so this would be a big PR opportunity for him, like 9-11 for Bush.

AntiPrivateWestBankers
By far the most ridiculous thing I've seen regarding Ukraine issue.

Normally i don't agree with anything you say..but this time your right.