posted on Mar, 7 2014 @ 11:35 AM
link
If you look at the full of the video... And I dont even speak spanish, and I caught it... There seems to be a round sat that may have come from the probe than was placed on it. It seems to match almost exactly with the shape of the one on the asteroid. Could anyone that speaks spanish actually translate the video? Otherwise, the video is worthless to me and anyone else who doesn't understand another language.


Also. the two pics are not exact. Look closely to the markers... one is turned more than the other. Where the big round object is on one, a small round white object is on the other.
edit on 7-3-2014 by StallionDuck because: (no reason given)


Thank you for pointing that out!

I did a quick check of size using your figures of 540m long by drawing a line directly across the width of asteroid in the picture I d/l from this thread. It came to 580pixels long ... so i can generally assume that each pixel is just under 1m in dimension.

I then roughly sized the 'tower/outhouse' and yes its not big at all [approximately 2-3m cubed] but could easily house a human sized occupant. Likewise with the tunnel.

The apparent 'dome' itself is approximately 33pixels or roughly about 30m in diameter and using that to extrapolate a possible volume of the dome at 27000 cubic meters.

If its a real structure it has ample room to provide living and working space for human sized occupants IMO.

how big is the probe that japan sent up, could it carry three marker probes big enough to be seen like this, and all the equipment it has to use.

Anyway..S&f ! Don't know what that is but..will keep looking myself.. just started on the pictures (lots of them!!) ..hope its not a hoax..but..will see!!


Well actually it's about 10cm across.

It had only just been released by the probe when the picture was taken, the only picture to show it. It appears to be on the asteroid but in fact is nowhere near it.

This has already been posted once, but bears repeating:

Soylent Green Is People
+1 more
posted on Mar, 7 2014 @ 12:20 PM
link
The explanation has already been given a couple of time in this thread, but apparently people don't seem to be noticing those explanations.

Image Caption: Hayabusa successfully released its target marker, shown on its way towards the asteroid Itokawa


The spacecraft is thought to have successfully landed a "target marker" - a small metal ball - on Itokawa, having releasing it from a distance of 40 metres away. The metal ball was to help identify the point where the probe would briefly touch down, before firing a pellet into the surface and catching the resulting debris. The plan was to return the first-ever asteroid samples to Earth. 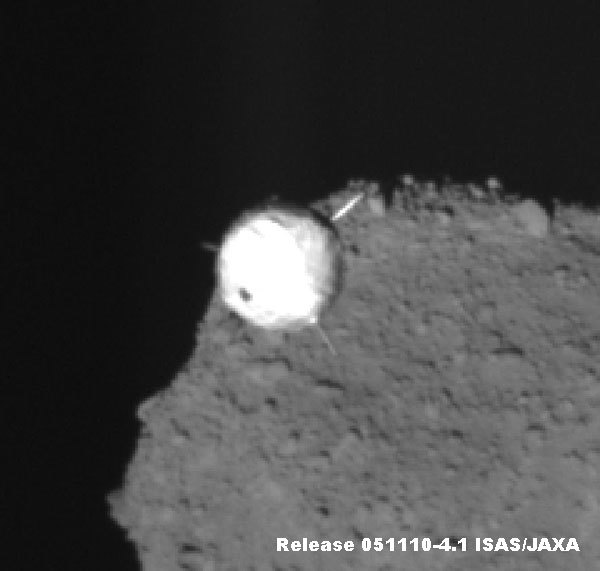 Image Caption: This is a photo of the target marker released by Hayabusa toward the "Muses Sea" site sampling target on Itokawa on November 10, 2005.

A picture snapped by the Hayabusa probe shows the target marker that was released toward the "Muses Sea" site during Wednesday's practice run.


Thank you very much! I concur! 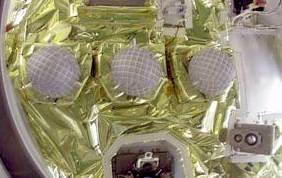 One of those balls would indeed look very much like the anomaly and I can see how perspective plays tricks on the eyes.

I am satisfied now that it is completely explainable!

I have a couple questions though, is this image taken in visible light? Or is this taken in radar?

If this is in radar, it's possible that that "Orb" shaped object is a material that is more "reflective" than the surrounding material, and to get an image of the whole object the strength of the radar was turned up, thus giving us this bright orb shaped object so that the rest of the asteroid could be imaged.

If this is in visible light, it's also possible this a reflection anomaly as well. There is something there that as it rotated into the sunlight it is reflecting more light than the rest of the surface and showing up as a bright spot on the Asteroid. How far from the sun is this object? Is it possible that this is a mere case of contrast?

Or is it a case of an actual spherical formation on this asteroid, depending on it's origin it is possible. We see spherical formations where there has been extreme heat followed by rapid cooling. It is then entirely possible that this same formation is possible in a much larger arrangement, the circumstances would simply be more extreme, and rarer than the former.

Again, those saying this is two images that are the same, I'm not convinced. We lack depth perception when it comes to photographs, and it becomes even more difficult when we are talking about large 3 dimensional objects in space. There is nothing to reference against the background as far as movement, or shadows. Space appears black because of the camera settings, and that same contrast could hide features when they are out of the light.

Notice the apparent contour of the landscape is different in the two photographs when traced. Now keep in mind this is a 2 dimensional picture of a three dimensional object and our eyes, and the terrain could be playing tricks on us. This object appears peanut shaped, but it could be entirely different this is simply our perspective.


Mmmmm, Interesting I jumped the gun before reading the whole thread but approached it logically. It's amazing they landed this object smack on the asteroid's axis. From the looks of things, that was almost a miss.

How large is that "sphere", it can't be that large if the satellite was carrying it, it appears to be 1/60th the asteroid itself. (in 2/d).


I'm glad it was discovered to be part of the project itself, and regret i did not read the entire thread before making my own reply, which is next to moot aside from the perspective aspect.

posted on Mar, 7 2014 @ 01:43 PM
link
The two images show different angles, not the same angle. Someone had said it was the same picture, so I wanted to clarify this is not the case. Near the top left there is a white rock or something, and in the second picture you can clearly see how the angle has changed, causing less of the object to be visible. And then right below that rock there is a long protruding arm, which is connected to the big white globe.

My first question is which came first? Did the globe disappear or appear? It could make a difference. I highly, highly doubt that ice would have formed in such a way, and only on this portion of the asteroid. Perhaps if there were escaping materials that could have been instantly frozen in such a configuration or something, that could explain it, but I highly doubt it. My point is that ice would not have formed on just this portion of the asteroid, unless there was something there that was more easily frozen than the rest of the huge rock. And then why would it take such a shape?

If this were another space rock, but smaller, why would it have simply rested on the surface? It would have collided, most likely causing some type of fracturing or other notable effects that would be visible. Whatever this is seems to have just appeared there, either formed there or sat down there.

After Hayabusa landed (aided by the target marker sphere), it collected a sample and sent the sample back to Earth; the sample arrived back on Earth in 2010.

posted on Mar, 7 2014 @ 01:48 PM
link
Kind of looks like a golf ball stuck to a rock. Maybe someone had a really good drive, knocking a ball into space. The spikes? The T


It's a real picture of a real (but artificial/non-natural) object in space.

There have been a few posts in this thread explaining what it is.

i need to take the opportunity to point something out with reference to skeptics and skepticism. first let me say skepticism is laudable when used appropriately. but too often people are skeptical for the sake of being skeptical. every UFO is swamp gas. even ufos in the desert, arctic, over the oceans, or what ever. that is as foolish as being too credulous.

I am not sure if you missed it or not but the object is not photo shopped. it is man made. it came from the probe itself. it was supposed to be there. it was used to calibrate the landing of the main probe. it appears to be on the surface via a trick of perspective. this was all explained up thread.

auto-dog piling any topic with a mind to debunk it to display superior mental acuity or something banal like that is not noble nor is it real skepticism nor the function of scientific reason. occasionally wierd stuff really does happen. and when it does it does not require someone throw up swamp gas or cries of hoax. Target markers unilluminated (top)
and illuminated by a flash (bottom) A Target marker. Very cool and why I like ATS so much.

We learn something new everyday. S&F.