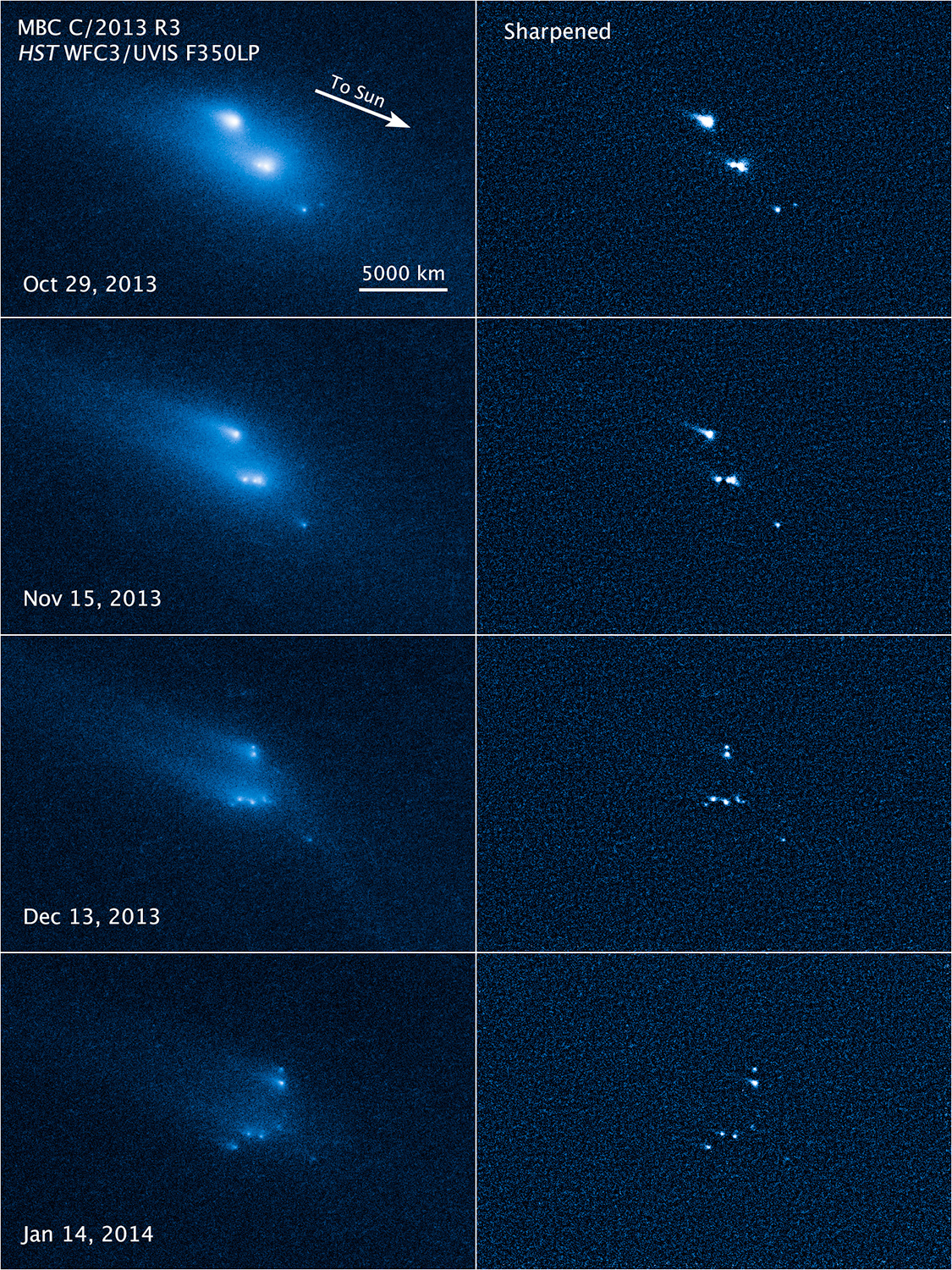 This series of Hubble Space Telescope images reveals the breakup of an asteroid over a period of several months starting in late 2013. The largest fragments are up to 180 meters (200 yards) in radius.

Remember the asteroid with "tails" like a comet's? It was proposed that the asteroid's increasing spin due to the light pressure from the Sun produced enough centrifugal force to dislodge dust off its surface. This time, it looks like this particular asteroid broke into pieces due to the same effect:


It is unlikely the asteroid is disintegrating because of a collision with another asteroid, which would have been instantaneous and violent by comparison to what has been observed. Debris from such a high-velocity smashup would also be expected to travel much faster than observed. Nor is the asteroid coming unglued due to the pressure of interior ices warming and vaporizing.

This leaves a scenario in which the asteroid is disintegrating due to a subtle effect of sunlight, which causes the rotation rate of the asteroid to gradually increase. Eventually, its component pieces -- like grapes on a stem -- succumb to centrifugal force and gently pull apart. The possibility of disruption in this manner has been discussed by scientists for several years, but never reliably observed.

For this scenario to occur, P/2013 R3 must have a weak, fractured interior -- probably as the result of numerous non-destructive collisions with other asteroids. Most small asteroids are thought to have been severely damaged in this way. P/2013 R3 is likely the byproduct of just such a collision sometime in the last billion years.

I would also venture a guess that this asteroid was a loose "rubble pile", a collection of rocks and dust only very loosely held by weak gravity, and the ever-increasing spin was enough to cause its disintegration.
edit on 6-3-2014 by wildespace because: (no reason given)


That may not be as silly as some might think


Does anyone know the distance between the (now) seperate parts? That might give a clue as to what caused it to come apart.

Look, great Italian site, universal telescope, sorry on tablet don't have link, but it shows these things coming in real time. It is awesome.

It's a main-belt asteroid, orbiting between Mars and Jupiter, so it doesn't come anywhere near Earth. The pieces are drifting apart very very slowly, at about 1 mph.


The asteroid's remnant debris, weighing about 200,000 tons, will in the future provide a rich source of meteoroids. Most will eventually plunge into the sun, but a small fraction of the debris may one day blaze across our skies as meteors.

Interesting theories about reasons for break up. Thanks again.


A really interesting story and pictures, one of the rare "First times seen in space" for something so 'mundane' as an asteroid. Flags, stars, and geese to you.

was this ever explained?