University of Arizona researchers snapped images of a planet outside our solar system with an Earth-based telescope using essentially the same type of imaging sensor found in digital cameras instead of an infrared detector. Although the technology still has a very long way to go, the accomplishment takes astronomers a small step closer to what will be needed to image earth-like planets around other stars

“This is an important next step in the search for exoplanets because imaging in visible light instead of infrared is what we likely have to do if we want to detect planets that might be suitable for harboring life,” said Jared Males, a NASA Sagan Fellow in the UA’s Department of Astronomy and Steward Observatory and lead author on a report to be published in The Astrophysical Journal.

Even though the image was taken at a wavelength that is just shy of being visible to the human eye, the use of a digital camera-type imaging sensor – called a charge-coupled device or CCD – opens up the possibility of imaging planets in visible light, which has not been possible previously with Earth-based telescopes.

“This is exciting to astronomers because it means we now are a small step closer to being able to image planets outside our solar system in visible light,” said Laird Close, a professor in the Department of Astronomy, who co-authored the paper.

He explained that all the other Earth-based images taken of exoplanets close to their stars are infrared images, which detect the planets’ heat. This limits the technology to Gas Giants – massive, hot planets young enough to still shed heat. In contrast, older, possibly habitable planets that have cooled since their formation don’t show up in infrared images as readily, and to image them, astronomers will have to rely on cameras capable of detecting visible light.

“Our ultimate goal is to be able to image what we call pale blue dots,” Close said. “After all, the Earth is blue. And that’s where you want to look for other planets: in reflected blue light.”

The photographed planet, called Beta Pictoris b, orbits its star at only nine times the Earth-Sun distance, making its orbit smaller than Saturn’s. In the team’s CCD images, Beta Pictoris b appears about 100,000 times fainter than its host star, making it the faintest object imaged so far at such high contrast and at such relative proximity to its star.

Here it is folks ! The first optical image of a planet outside our own solar system ! 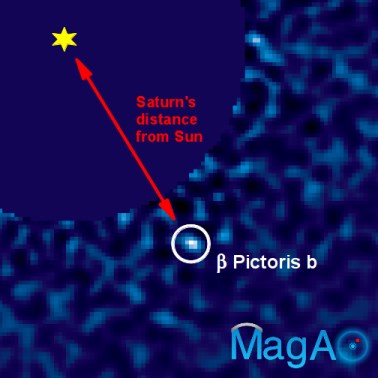 I'm so excited about this news I almost forgot the links

posted on Mar, 6 2014 @ 05:19 PM
link
I Love living near the UofA precisely because of their planetary science resources and getting to talk to drunk astronomers at the local watering holes.

Wow, our first exoplanet imaged from ground scopes... exciting times! Thanks for posting.

They don't mention what type of star either, unless we're supposed to know about that already.

So if pictorus B is the first exoplanet picture what's this then from 2013, 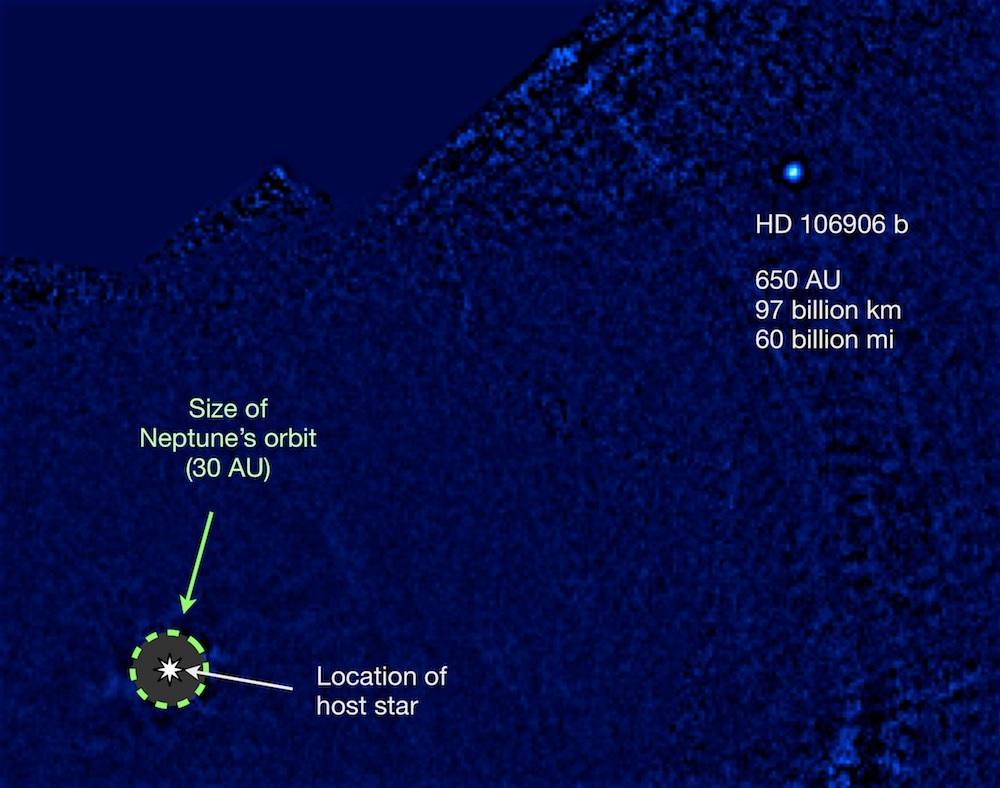 
A pixelited-looking white/blue spot is not exciting for me. If nobody tell you it's a planet, you wouldn't guess it.

lemmin
What was this, then?


You're right, in your link it shows an image from Gemini North telescope as well as a Hubble version*, and that story is from 2008.
So what about this mirror that shakes, rattles and rolls, how good is that for the actual image, and to what loss, precious light being the most likely? The Gemini North image shows up more white than anything, while Magellan AO adapted imagery is blue with the given explanation. So, whatever the 'first' from Magellan AO is, it is not an exoplanet itself, it must be something else lost in the text.

zilebeliveunknown
On a serious note, what information can we extract from these images which would be useful to us in our quest of hunting alien planets and extraterrestrial intelligence?


By using specific filters that isolate various chemical emission or absorbtion lines, we can learn about the planet's atmospheric composition. I recall that astronomers even produced a temperature map of an exoplanet, showing how it's heated by its star on the day side, and how an area of hot air persists on the night side around the planet's equator.

with just a few pixels you can detect differences in contrast which can be attributed to continents, ocean, cloud covers, ice caps, mountain ranges. desserts, significant vegetation, even potentially city lights via skilled analysts. also from the spectra values you can perform chemical analysis of the atmosphere and even planet surface. detect bio signature chemicals like O2 and Methane.

the more pixels wide you get the more details you can work out. and per the article this is the beginning of the use of this technology in astronomy. it will only get better. imagine a billions of billions of pixels camera.