Question for the 'Moms' Here...

We saw one on display at Sears a few weeks back... My daughters had to drag me away saying daddy was being stupid flailing his arms around every witch way... Girls... Geez Never let us guys have any fun...


Oh now that would never work while I'm watching Nascar...shaking my fist at rival drivers, and giving them a middle finger salute. I'd be changing channels constantly...
edit on 8-3-2014 by AccessDenied because: (no reason given)

We saw one on display at Sears a few weeks back... My daughters had to drag me away saying daddy was being stupid flailing his arms around every witch way... Girls... Geez Never let us guys have any fun...


No necessarily. Look at my issues with automatic sinks. The solenoid in those don't register me. These tvs could very well work in the same way. That's my biggest fear--that at some point, technology in the home is going to advance to a point where I cannot use a dishwasher. lol


Wow... what your explaining here sounds very similar to things that have happened to me since giving birth. I can not believe the similarities here. Wow... maybe I finally have some answers to what is going on with me.


Read up on Kundalini awakening after giving birth... you might find some answers there.


Wow... what your explaining here sounds very similar to things that have happened to me since giving birth. I can not believe the similarities here. Wow... maybe I finally have some answers to what is going on with me.


Are you rh negative, too? Static issues come up in discussions of people with hemochromatosis or rh negative blood. I was never diagnosed with the former but my higher than normal ferritin levels were noted several times. It's typically present from birth. I do have a friend with hemochromatosis and after my little discussion with that electrician, I asked her if she had similar issues. She did. We thought it was pretty funny. As much as it is a pain, we can always look at the bright side--killing the magnetic strips on credit cards limits spending, lol.

Nobody really takes the problems with static electricity very seriously so not a whole lot of research on the problem. Only reason why my doctors even looked at it was because touching me had its consequences. I live in an area known for high humidity so they knew that just wasn't right. I can be in a humid environment, barefoot, and wearing pure cotton clothes and god knows, somebody is going to get zapped. It's been worsening rapidly over the last year for whatever reason. I'll generate such a charge that my hair will get filled with it and the ends will crinkle/stick to my face. It's not cool. Bought a static bracelet to try to help defend my computer and its components. It doesn't work so don't waste your money on that. I spray myself with a mixture of water/liquid fabric softener and run metal over my hair before binding it up when it starts to build now. At my worst these days, I can disperse about 20 or more shocks. It's pretty bad.


I am not the same blood type as you. But I have had Iron issues since giving birth and no known cause has been found. We just deal with it when the levels are not normal.

I also shock things all day long. I blow the bulbs in all my lamps and lights regularly. I have awful static build up in my hair non stop. I hate it. My hair is always sticking to my face and is always fly away and statically charged. I shock things so often is actually hurts. If the lights are out and I go to turn on or off a lamp I've seen the shock light up the room for a split second. 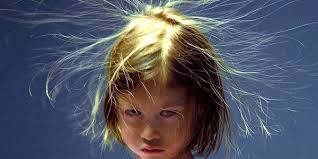 posted on Mar, 11 2014 @ 08:45 AM
link
My wife "moves" her digital clocks forward by about 5 minutes - and then they stabilize. She had a friend with the same issue, who found it was resolved with Zinc; but I don't remember whether she needed more zinc or less zinc.

Re: gesture-based TVs; they work different than gesture faucets. The TVs use a camera, the faucets use "EM detectors". You could always hit the local TV store and try one out before buying it.

So iron for you, too. Interesting.

It's true about the computer thing. Know that for a fact. My computer basically endured about 60 jolts from me in a couple of days and it caused the CPU cooling unit to fry and pop. Nearly destroyed my rig. It's the first computer I've ever damaged--usually keyboards and mice are the things that go. If you have that problem, I've found that Saitek Eclipse II keyboards actually endure me well. The keys have a kind of rubber matte beneath them and are mechanical and I think that combination is why. I was going through keyboards every 1-3 months previously. I've had two Saitek. My eldest is using my old one and I picked up a new one. The old one is still working and is almost 7 years old now. They are more expensive than a base keyboard but they are infinitely less expensive over time because they don't die. I also use a high quality gaming mouse as well and they endure. Haven't experienced long boot ups. Like I said, no experience with computer death from it until recently, lol. You might check for malware and do a disk cleanup (in accessories) to see if it helps speed up the boot.

Try getting a fly away spray for your hair--you know the stuff for kid hair? An ionizing dryer and brushes are supposed to help, too. I just end up drying my hair til it's still damp and then binding it to let it dry the rest of the way. Coiled CFL bulbs for your lighting. Can't emphasize that enough. They are the only bulbs that survive me and they cut down on energy use, too. Win-win for us.

I've had blue electrical arcs get emitted from shocks so know what you're talking about and believe you. I will never forget the first time that happened when I shocked my ignition on my car. My ex-husband turned white as a sheet, lol. The shocks can be pretty harsh. I actually had an instance where the crack from it was so loud that the woman from the next aisle came over to check and make sure I was okay, lol. I've broken plastic crystal faucet covers from jolts passing through to the metal. Zapped water while washing my hands, wood (wth, right?) and have even shocked a bunch of bananas which prompted the most humiliating response from a woman next to me. It's dumb. I always find it irritating when people start making superhero jokes because they just don't get that this isn't a super power. It's a disability. Well, maybe it is kind of a superpower because for a while my ex was telling the kids that if they didn't behave, I'd touch them. He had them convinced that I could zap at will, lol. He was kind of a jerk.


Can you find out which it is? That'd be great if it could resolve the issues. And thank you for the clarification on the tvs--although I'm not down with facial recognition on tvs, at least I'll know that if I'm stuck getting one, it'll work for me, lol.

posted on Mar, 11 2014 @ 02:20 PM
link
I have never in my life, pre or post-pregnancy, heard of any of this battery draining stuff before. I think it's more likely you need to examine what batteries you're buying and study the lifetime of each brand firsthand. I've personally found that anything Rayovac makes lasts a hell of a lot longer than other brands, especially Duracell, which I swear even cheap store brands can run circles around.

Not much has changed for me since having kids. I'm just a clumsy as I've always been, get just as many static shocks as I always have, and inadvertently break just as much inanimate stuff as I always have. Well, maybe that's not entirely true. My tatas sag lower, and I've got more padding, and my knees and hips hurt more frequently. Those are also age-related anyway, though. Face it, kids or no kids, even the hottest rack eventually droops, even the fittest person gains weight, and even the most awesome feeling person can have joint troubles. Kids just seem to speed that all up.


I actually don't have problems with batteries draining. Watches do die but replacing the battery doesn't fix it. The internal components of the watch get fried. Both my sister and I have that problem and our track records on watches is pretty bad. The damage has always costs more to fix than the cost. It basically requires a total gutting and replacement of most of the internal components. My mom did take a gamble on a couple of Skagen watches that were perpetual motion. Basically, purely mechanical, winds by arm movement and no quartz or battery. Mine lasted a year and a half before it got lost, which was a record. Really was upset losing it. For us though, it was never the batteries draining. We just murdered them.

Same goes with regular AA, AAA, C and D batteries--they last fine. I think the battery drain idea comes from those dead watches though if it is the same problem for others. I've never had replacing a battery on a dead watch work but I can see how the assumption could be formed. We just figured out our issues because my parents decided to give us each a $250 watch one year for Christmas that we each destroyed. They were expensive enough to get repaired--at least until the quotes by two separate repairmen came back at over the cost of the watch with a description of what was wrong with them, lol.