Porsche 918 Spyder a mid-engined sports plug-in hybrid? How good can that be? W/Vid 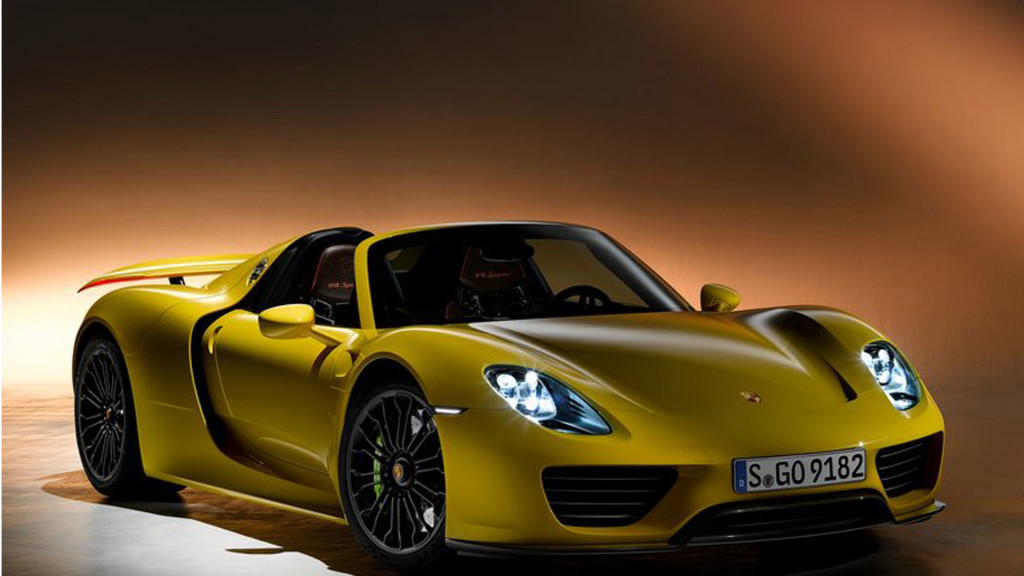 
The Porsche 918 Spyder is a mid-engined sports plug-in hybrid designed by Porsche and first shown as a concept at the 80th Geneva Motor Show in March 2010. The Spyder is powered by a 4.6 litre V8 engine, developing 608 horsepower (453 kW), with two electric motors delivering an additional 279 horsepower (208 kW) for a combined output of 887 horsepower (661 kW). It is the second plug-in hybrid car from Porsche, after the 2014 Panamera S E-Hybrid.[3] 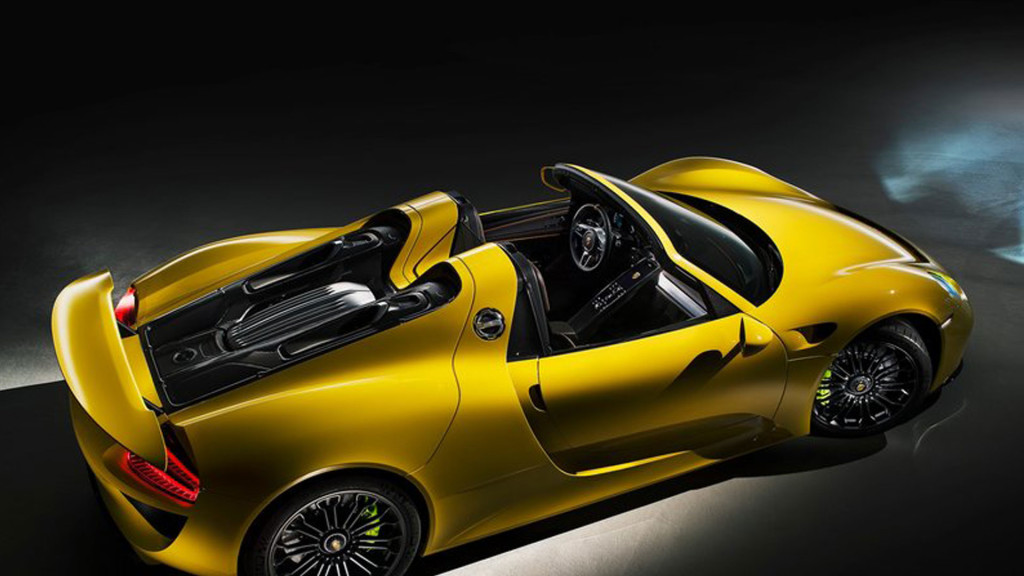 This is a car that's been talked about for a few years now. the promise of a supercar hybrid to change the way supercars are made. the reason for that has everything to do with very harsh new CAFE (corporate average fuel economy) requirements that make the cars of old unsellable here in the US and Europe. 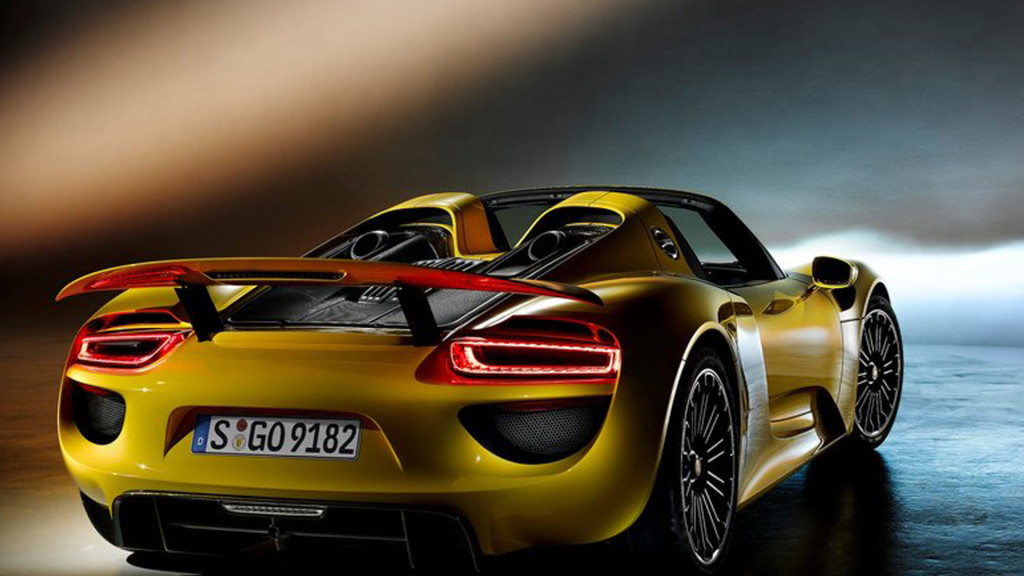 That's a rather mild 4.5 percent increase... but that is in and of itself, is a first step towards The proposed standards in implementing a 40 percent increase in fuel economy by 2020, as mandated by the Energy Independence and Security Act of 2007. You can read about the EERE announcement here

which simply means all cars will have to be lighter leaner and a good deal more efficient than ever before and what better way than to showcase what is possible than with a supercar?


The 918 Spyder offers five different running modes: E-Drive allows the car to run under battery power alone, using the rear electric motor and front motor, giving a range of 18 miles (29 km)[1] ; the car can reach 93 mph (150 km/h) in this mode.[5] Three hybrid modes (Hybrid, Sport and Race) use both the engine and electric motors to provide the desired levels of economy and performance. In Race mode a push-to-pass button initiates the Hot Lap setting, which delivers additional electrical power.[13]

Now how do you feel about owning a hybrid?

Oh I admit I'm not a huge Porsche fan and I certainly do not the have the $845,000, not including destination and handling for one. Still after watching the vid and looking at the photos all I can say is

posted on Mar, 6 2014 @ 12:32 PM
link
Great car but i'm wondering why there's a thread about it on a conspiracy site. Where's the conspiracy here ? Doesn't this belong on a motor car website ?

sayzaar
Great car but i'm wondering why there's a thread about it on a conspiracy site. Where's the conspiracy here ? Doesn't this belong on a motor car website ?

Good question and the answer is...
I didn't post my thread in the conspiracy section but rather the science & technology part.
ATS as a long history discussing emergent tech.
This story is more than just another hot car BTW...
This is a peek into what kinds of really cool things we can expect to see in the next few years

HardCorps
I want me one of those!

So...take a Carrera GT chassis, add a ton of hp, and a ton of extra weight...


FYI
GT 3 sales have been stopped world wide and Porsche is taking back the GT's already delivered to customers.
Seems like they have a nasty habit of spontaneous combustion... AKA bursting into flames while your cruising down the road.

This ones to new for us to hear about any fatal glitches. Time will tell right?

HardCorps
This ones to new for us to hear about any fatal glitches. Time will tell right?


Call me when super car manufacturers can only sell to persons that hold a valid race license.

I don't need a special license to drive a vehicle that goes from road to race in a 1/4" movement of my foot?

There is a reason that super cars are some of the deadliest vehicles on the planet per distance driven.


I understand what your saying.
I too hold a CDL with TXP and motorcycle endorsements.
the testing and training the goes along with that is intense but any old joker with enough money can drive one of these pocket rockets is just crazy!

Still the focus of my thread was less about the car than it was about what we can expect to see from car companies in the next few years.


Expect to see a disappearance of spoilers and wings. Adaptable skins are going to become the norm.

Aside from exotics (and a couple ideological throw-backs...I'm looking at you Chevy) expect to see V8's phased out of the car market completely. The weight and efficiency advantages have started to include more power then today's V8+ supercar.

Expect to see a huge growth in electric cars, especially in the urban areas.

Expect to see a disappearance of 'spring' based suspension systems. McLaren, you are awesome. Better ride, better control, fewer parts, and less weight...all around bonus for everybody.

Expect to see a massive increase in 'driveability' enhancements. Today it is park assist, tomorrow it will be auto slow and stop for red lights, auto roll for green on adverse driving conditions, etc. Every car will become very 'easy' to drive.

Expect to see a drastic reduction in vehicle weight over the coming years. The advancements in plastics and composites is going to let the manufacturers retain all the 'luxury' with out the added weight.

Basically, take the car you have based this thread on, and make it weigh like a Lotus Exige, get the economy (in standard city driving) of a Smart Car, and have all the driver assist of a luxury sedan, in about 5 years.


VW is already offering Adaptive cruise control... Radar based...
That that system is capable of automatically adjusting the speed of a vehicle to match the speed of the car or truck in front of it. If the lead vehicle slows down, or speeds up the system adjusts to match. In the VW it all also apply the breaks to prevent a low speed collision all without input from the driver.

the result is their cars have dropped 3 points in their insurance ranking, making them cheaper to own.
edit on 8-3-2014 by HardCorps because: (no reason given)