posted on Mar, 6 2014 @ 11:02 AM
link
So the US leadership is supporting the creation of One Nation Under God in Ukraine. As one of the key groups involved in the militant overthrow of an elected government has stated in its party platform, “a system of the dictatorship of the Nation with regard to the socioeconomic interests of the people” needs to be implemented (more below).

Isn't that what the military in Egypt proclaimed in its coup to oust another elected official, Morsi?

The American press is fond of patting itself on the back for upholding the first amendment to the US Constitution, that being, among other things, freedom of the press. But that does not mean the freedom to obfuscate, ignore facts and curry favor with the US national security apparatus in whatever covert or overt form it takes.

The New York Times, Wall Street Journal and the Washington Post have engaged, once again, in a classic information operations effort. This time it is to shape a national anti-Russian consensus around the legitimate concerns of the Russian government. As these three big corporate institutions are the semi-official organs of the United States' government, they have shown the weakness of President Obama's national security advisers and, by proxy, heavyweight financiers like George Soros (who runs the Open Society NGO).

The power of the three media outlets exists in the corporate, for-profit nature of the enterprises, not any notable journalistic enterprise. They engage in pay-for-journalism beholden to advertisers, shareholders, investors and the US government. All three groups are known to collaborate on stories with state, local and federal officials so that news is not news to officialdom. But as Don Corleone said in the movie The Godfather, “It's just business.” What else can one expect from a quasi-representative democracy?

The Wall Street Journal is owned by Fox News Corporation. News Corporation's ability to reach into and shape the opinions of tens of millions of the global watching/listening public is unprecedented. From the Wall Street Journal to National Geographic--and hundreds of media outlets local, national and global--it can carry its anti-Russian message 24 hours a day, 7 days a week.

The Washington Post is owned by Jeff Bezos of Amazon fame. Little reported is the $600 million contract it recently won to provide the CIA with information technology products and services. Bezos had negligible presence in Washington, DC prior to his acquisition of the Washington Post, but now has a very loud voice. The Post has always been close to the CIA and other national security agencies with Katherine Graham (former owner) indicating in a speech to the CIA that there are some things Americans “don't need to know and should not...”

That might have been the case decades ago, but in the age of the Internet/WWW, hackers and independent journalists who know “it's not about the money” and can report freely, Graham's statement is nonsense. In short, in 2014 the playbook of the ruling class is open for all to see.

posted on Mar, 6 2014 @ 11:03 AM
link
And what of the dreary New York Times? Gray indeed. This just about sums up what a once great journalistic enterprise has become. “Now in its fourteenth year the Luxury Conference is one of the world’s most prestigious annual forums for the global luxury business, bringing together 500+ of the most senior business and creative leaders from the top echelons of the industry to gain insights, share ideas and expand their international networks. The 2013 conference took place in Singapore and examined the growing influence of Southeast Asia in the luxury market - as both creator and consumer. Speakers included: Ermenegildo Zegna; Domenico De Sole, President, Tom Ford International; Angelica Cheung, Editor in Chief, Vogue China; Anna Sui, Founder, Anna Sui; Bryan Grey Yambao, Blogger, bryanboy.com; HRH Princess Marie-Chantal, Founder and Creative Director, Marie-Chantal; and Andrew Keith, President, Lane Crawford and Joyce. The award-winning 2012 conference took place in Rome and analyzed the potential of Africa and the power of the Mediterranean with contributions from major names such as Bono, Donatella Versace, Jean-Paul Gaultier and Vivienne Westwood.”

Dean Acheson once said that Americans could hold focus on international issues for about ten minutes. So maybe President Obama is doing Americans a service by cutting back on press freedom. But wait! Isn't that something that President Putin would do?

One Nation Under God in Ukraine

Party Platform of UNA-UNSO. Note the logo for the party.

“Required: Terminate the current practice of destroying the education system through its Americanization and privatization...National Social Power--a system of the dictatorship of the Nation with regard to the socio economic interests of the people..Our enemies: communism, cosmopolitanism, liberalism

God created us in Ukrainian and Hallowed be His will for evermore. We stand for God's will. God is with us! Our highest duty: the implementation of Ukrainian national idea - the idea of self-assertion of the Nation, the creation of the state of the Ukrainian national system...the purpose of the education system must be to develop the creative potential of the nation, the formation of highly educated personnel, education nationally conscious, active, selfless and sacrificial citizens of Ukraine.”

Party Platform of Right Sector. Note the Logo for the party
“The purpose of human existence is [to be] closer to God - or man, society, state degraded, degenerate and decadent. Humanists its [their] struggle with Christianity began with the denial of God and the deification of man: Man Anthem! Man, not God (P.Tychyna). Because of Jacobinism, socialism and social democracy, they naturally came to National Socialism, which turned man into beast, and communism that worked meaningless servants and destroyed millions of oppressed peoples. The current through demoliberalizm (sic) humanists, cosmopolitanism and globalization are not only individuals but entire countries are by atheism and denationalization, homosexuality and drug addiction.
Christ's teaching comes to everyone. And the man has to take care that the grain of truth zakorenylysya and sprouted in her soul a living faith. The child must grow and protect. Faith must cultivate and protect. Bandera [Nazi collaborator] taught: "We need not distinguish the defense of the Christian faith and the Church of the national liberation struggle, just concentrate and focus the main efforts around those critical statements against which the enemy directs strongest attack..Head over to the school between young children, where the enemy is trying to fill their hearts with Moscow and Washington poison, and taught there will be love and devotion to his native land.”

posted on Mar, 6 2014 @ 11:03 AM
link
“Svoboda's nationalism is based on love, respect, and honour...We are Social Nationalists. We do neither belong to the old Communist nor to the new Democratic nomenclature. We have a new vision of the world and we can correctly assess the political developments in Ukraine. 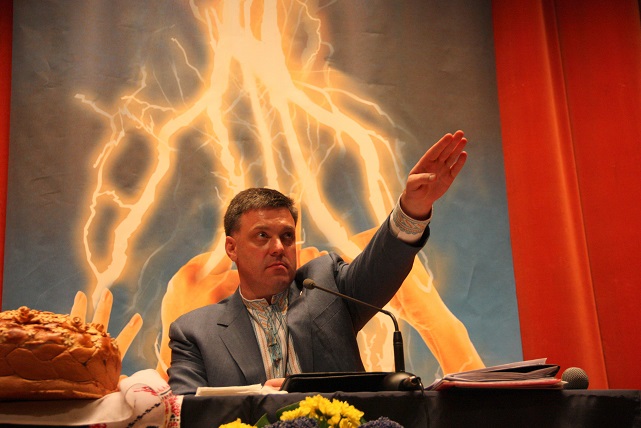 
The ex-Israeli soldier who led a Kiev fighting unit
'Delta' has headed 'the Blue Helmets of Maidan' of 40 men and women - including several IDF veterans - in violent clashes with government forces.

Delta told JTA in Hebrew laced with military jargon. “I joined them then and there, and I started fighting back the way I learned how, through urban warfare maneuvers. People followed, and I found myself heading a platoon of young men. Kids, really.”

The other ex-IDF infantrymen joined the Blue Helmets later after hearing it was led by a fellow vet, Delta said.

As platoon leader, Delta says he takes orders from activists connected to Svoboda, an ultra-nationalist party that has been frequently accused of anti-Semitism and whose members have been said to have had key positions in organizing the opposition protests.

“I don’t belong [to Svoboda], but I take orders from their team. They know I’m Israeli, Jewish and an ex-IDF soldier. They call me ‘brother,

something smell a little off here or is it just me?
edit on 6-3-2014 by Danbones because: (no reason given)


nazis and zionist working happily together...just like the good old days
edit on 6-3-2014 by Danbones because: (no reason given)


That pic you keep throwing around on every thread is getting real old.


It's not the salute. It's the evil people that use it that bugs the hell out of me. Like the confederate flag. The cloth is innocent. It's the intent of the display that is evil.

Damn authoritarians and automatons are ruining this country.

In this instance it would be:

'the American attempt at gaining control over Ukraine including the strategic Crimea'.


Isn't it up to the Ukrainians to decide what they want and hopefully to vote on it. Sure they have toppled their government, something many people would love to do in other countries but can't. Everywhere it living in squeezed times and, when on considers the actual wealth in the world, its something none of us should be doing so its not surprising that a Government has fallen. I expect this is more what bothers the USA and other country's people sitting pretty in Government.

Another thing is that perhaps Ukraine is somewhat of a convenient distraction that the USA hopes will get Putin's focus off of Syria, so they will make as much of it as can be wound up, especially by government's media wallies. I suspect the news channels will all slowly run down because hardly anyone with any sense watches them anymore, its easier to find out the truth on the web.


Even if you don't call a spade a spade, anyone who looks at it knows it's a spade.


It's not the salute. It's the evil people that use it that bugs the hell out of me. Like the confederate flag. The cloth is innocent. It's the intent of the display that is evil.

Damn authoritarians and automatons are ruining this country.

general beauregard whosew personal flag my av belonged too was anti slavery and pro rights
he was asked to fight for the north as well as the south because he was in charge of west point at the time he was fighting against the same banking interests decended that just installed the nazi pictured above...
the flag also represents the working celtic cross which is the stars pyramids and the cross

again thats not even the confederate flag
sure explains why you can't see a nazi right in front of your face...like maybe you is one


back on topic
i guess some people cant debate the facts its insult with bs
bottom line the us and NAZI helper george SOROS just installed another nazi stooge...
nice jackboots
edit on 6-3-2014 by Danbones because: (no reason given)

posted on Mar, 6 2014 @ 12:02 PM
link
National-socialism is just a soft name for fascism. Don't forget, many of their grandfathers were fascitsts in WWII. It's not a joke.

posted on Mar, 6 2014 @ 01:58 PM
link
If any 'land of the free'' were truly a supporter of freedom they would be siding with Crimea's long wanted, often tried, attempt at freedom ie independence from Ukraine.

There are international laws against fascism and isn't that occurring now in Ukraine, fascism?

Are the US and EU bothered about the fascist led riots?

Are they more bothered about an ethnically Russian nation and it's people asking for being part of Russia again and spoiling their plan of getting their hands on the Ukrainian bounty and the military and trade strategic Crimea?

Hypocrisy and Irony from the US is showing, at least the EU, UK, Germany are keeping out as far as possible.
edit on 6-3-2014 by theabsolutetruth because: (no reason given)


Well said. The U.S. would do the same thing if they had a similar situation/opportunity.